One of the impending benefits of belonging to a family of billionaires is that the children, and most times posterity, can find themselves landing a favorable inheritance. The billions that these children can earn overnight is enviable, while many may begin to compare these lot to their own rotten luck and misfortune. However, it is still entirely up to these billionaire parents whether or not they want to leave their billions in the hands of their offspring, preferring to leave them for a bigger cause or provide a bigger lesson encouraging their children to work and make their own billions. In certain countries, namely India, this can drag families to court and front-page headlines, but the west seems to be more civilized in this matter, allowing the billionaires to decide to do exactly as they please with their fortune.

Ted Turner – Net worth: $2.2 bn
This media magnate and founder of CNN has signed the aforementioned Giving Pledge. He has seen many ups and downs in his life since he began his career at the age of 12 working for his father’s billboard company. He made $7.3bn in stock in 1996 when he sold Turner Broadcasting to Time Warner but in five years shares dropped bad. He is known to be one of the, if not THE first celebrity to donate $1 bn when he gave the amount to the United Nations. He has also pledged to give $10 mn to the UN every year until his death. Ted has married and divorced three times, and have five children who will not be inheriting all his net worth based on the donations and philanthropic moves. 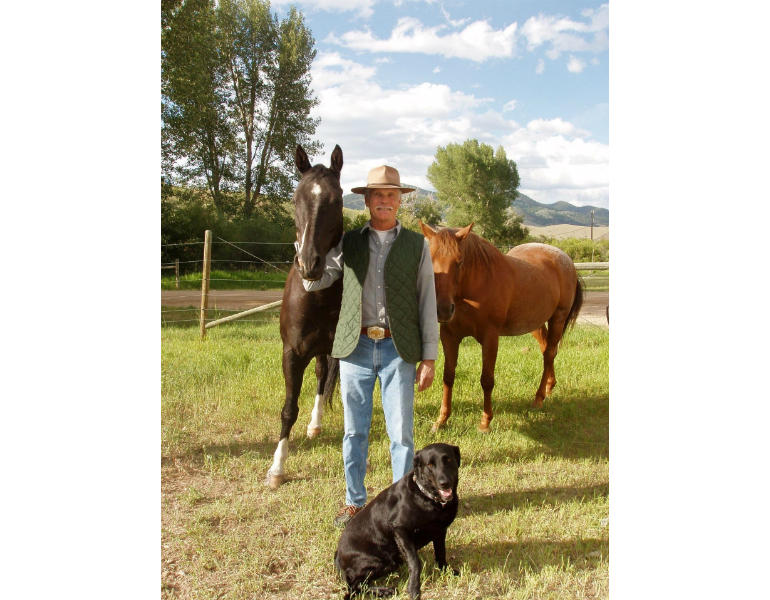 He is, however, after Bill Gates America’s second-largest landowner and has around 2 million acres of land – he lives today in a 113,000-acre ranch in Montana. He is also famous for his marriage to actress and activist Jane Fonda, whom he divorced in 2001 and since has been living alone focusing on his philanthropy, his huge property, and also a 51,000-bisons ranch in Argentina. Oh, also his steakhouse chain called Ted’s Montana Grill that serves, well, bison. He still wishes to see his grandchildren grow in a world that preserves the plant and animal kingdom. Ironic, however, it may be. 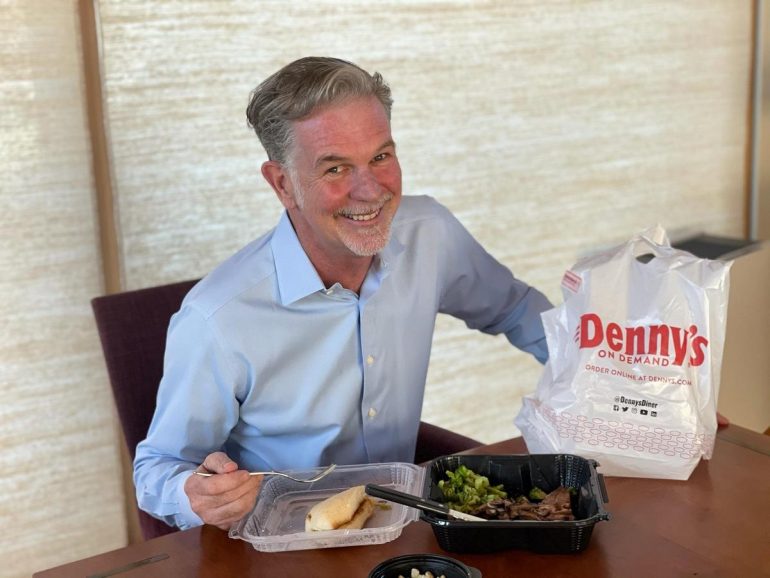 Reed Hastings – Net worth: $5.6 bn
Netflix co-founder and CEO Reed Hastings did something that not many men in history have attempted – he announced a duel with sleep, and years after the over-the-top content platform has entered the lives of people the world over, today it still stands true to its challenge – “the only competition being sleep”. An engineer by profession, Reed co-founded Netflix with Marc Randolph in 1997 when the company started with mail-order DVD operations. While he is worth billions now, there was a time he had a job as a door-to-door salesman. Today, while he has a satisfactory and impressive journey to look back at. In his free time, he doesn’t sail away in his yacht or go fishing or try to find ways to build a backup on Mars – he does what the rest of us mere mortals do, takes yearly vacations and in the evenings he will ‘Netflix and chill’. He also enjoys spending time with his family including his wife Patty Quillin and their two children, as well as a house full of pets including a couple of Nigerian dwarf goats as pets. He donates handsomely to political campaigns, and also for education. Recently, he donated $120 mn to historically black universities (HBU). The recipients of his inheritance are hugely educational institutes and the education sector, including a $100 mn philanthropic fund for kid’s education. Most importantly, and coming to point with this article, he has also signed up for The Giving Pledge, which may significantly reduce his children’s inheritance no doubt. 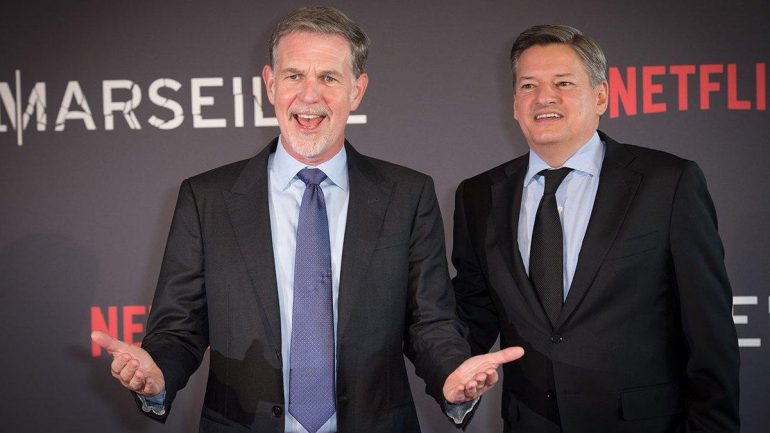 In his free time, he doesn’t sail away in his yacht or go fishing or try to find ways to build a backup on Mars – he does what the rest of us mere mortals do, takes yearly vacations and in the evenings he will ‘Netflix and chill’. The recipients of his inheritance are hugely educational institutes and the education sector.


George Lucas – Net worth: $7.3bn
The Star Wars creator has four children. Shortly after he sold off his Lucasfilm to Disney, he announced that a major part of his wealth will go into educational philanthropy. The sale of his company brought him a profit of $4.05bn, and he kept his word that he would donate handsomely to education. He has reportedly said: “It (education) is the key to the survival of the human race. We have to plan for our collective future – and the first step begins with social, emotional, and intellectual tools we provide to our children.” This might be the effect of his own humble childhood, having helped his parents run a stationery shop before moving to the University of Southern California.
His children are not too affected by this, though, as they all have their own careers and will continue to benefit from the Star Wars franchise. Of the four, three of his children are adopted, and the fourth child was born out of surrogacy. In order to continue his dream to help in educating children, he also created Edutopia – the George Lucas Educational Foundation. 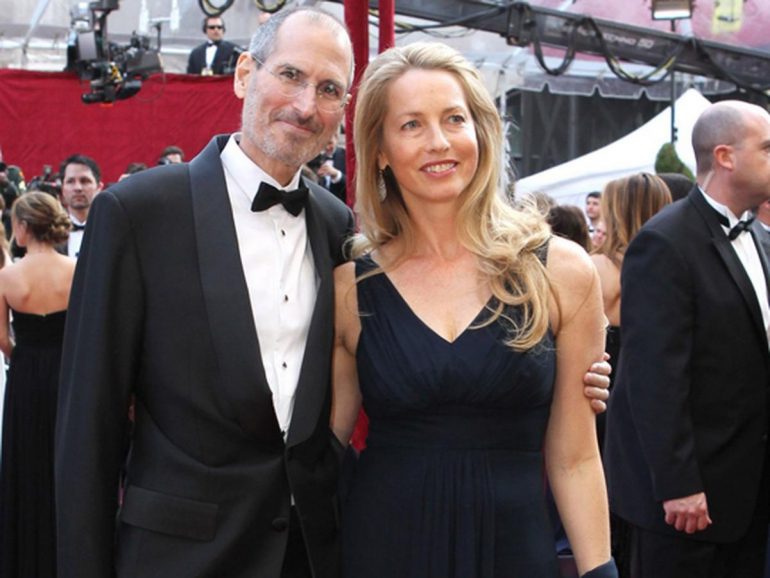 Laurene Powell Jobs – Net worth: $22 bn
The wife of the late Steve Jobs, co-founder of Apple, does not believe in the accumulation of wealth. According to Forbes, she said, “My relationship with money is that it’s a tool to be self-sufficient, but it’s not something that is a part of who I am.” The money is going to “end with her” she says, and has been distributing her late husband’s wealth “effectively, in ways that lift up individuals and communities in a sustainable way”, according to the Insider. She also founded in 2004, the Emersion Collective – a social change organization that focuses on education, immigration, and social justice.


Laurene and Jobs have three children together, as well as his firstborn Lisa Brennan-Jobs from another relationship. Lisa and her siblings have inherited a few million from her father, and will not be included in the remaining of his wealth. Laurene however has also not signed the Giving Pledge by Warren Buffet and Bill and Melinda Gates, where signees pledge to give away the majority of their wealth to philanthropy – she’s got her own way of distributing the wealth. 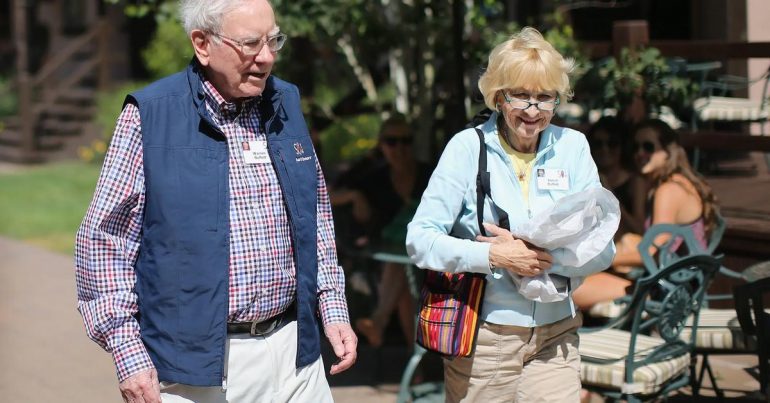 Warren Buffet – Net worth: $103.7 bn
“I want to give my kids just enough so that they would feel that they could do anything, but not so much that they would feel like doing nothing.” This is what media mogul Warren Buffet is known to have said about whether or not he is leaving his fortune for his children. He is one of the billionaires behind The Giving Pledge campaign alongside the Gates.


He has also pledged to give more than 99% of his wealth away to charity, leaving very, very little for his three children. However, each of them has a $2 bn foundation funded by their father. The CEO of Berkshire Hathaway makes a wise point, “Society has for my money; I don’t”. Clever man.
Bill Gates and Melinda Gates – Net worth – $133.2 bn
Individual worth: Bill Gates: $129.6 bn | Melinda Gates: $5.7 bn
The co-founder of Microsoft, business magnate, and philanthropist, Bill Gates was num. 4 richest person in the world until recently when he slumped a few places down after transferring $5.7bn to his now ex-wife Melinda Gates. This was the outcome of the divorce announced by the couple in May this year. The divorce will leave the Bill and Melinda Gates Foundation that they started in 2000 unscathed, but there may be some better news for the couple’s three children. 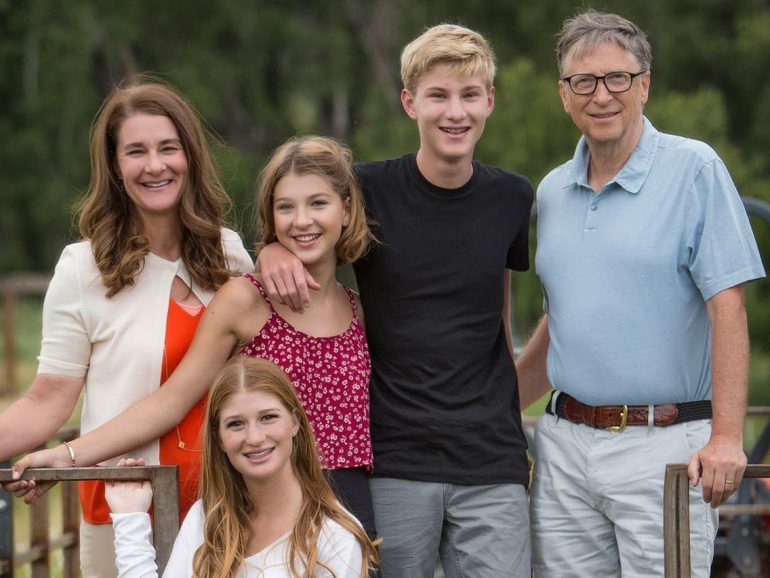 These kids were to be only getting a meager $10 mn each as inheritance as per earlier reports, but the divorce may bring them some inheritance joy as their mother may be inclined to change the inheritance. In an earlier interview, Gates had mentioned that leaving “kids massive amounts of money is not a favor to them” and that “Melinda and I feel good about it”. That looks like it may not have been the case if this is a clause that she’s going to add to the divorce settlements.


In any case, Jennifer, Rory, and Phoebe can look forward to a more secure and lucrative future. It is a little bit of a shame though if we are to go by Gates’ words about what he planned with the money, as Forbes quoted him – “Money has no utility to me beyond a certain point. Its utility is entirely in building an organization and getting the resources out to the poorest in the world.”
Mark Zuckerberg – Net worth: $137.3 bn
What would the world have been without Facebook? What was it like before Facebook? Unimaginable now, isn’t it? Mark probably never expected it either when he found his Social Network in college but years later, here he is – notoriously famous for changing the way mankind socializes and remains connected.
In 2015, when Mark and his wife Priscilla chan welcomed their first child, daughter Max, they announced in an open letter that they would be giving away 99% of their company shares over the course of their lifetime to a foundation they created to “promote equality for all children in the next generation.” The young billionaire has been in the news for all the right and wrong reasons and has shown what style can be moderated in just grey and blue denim. The couple also has a second daughter, August. 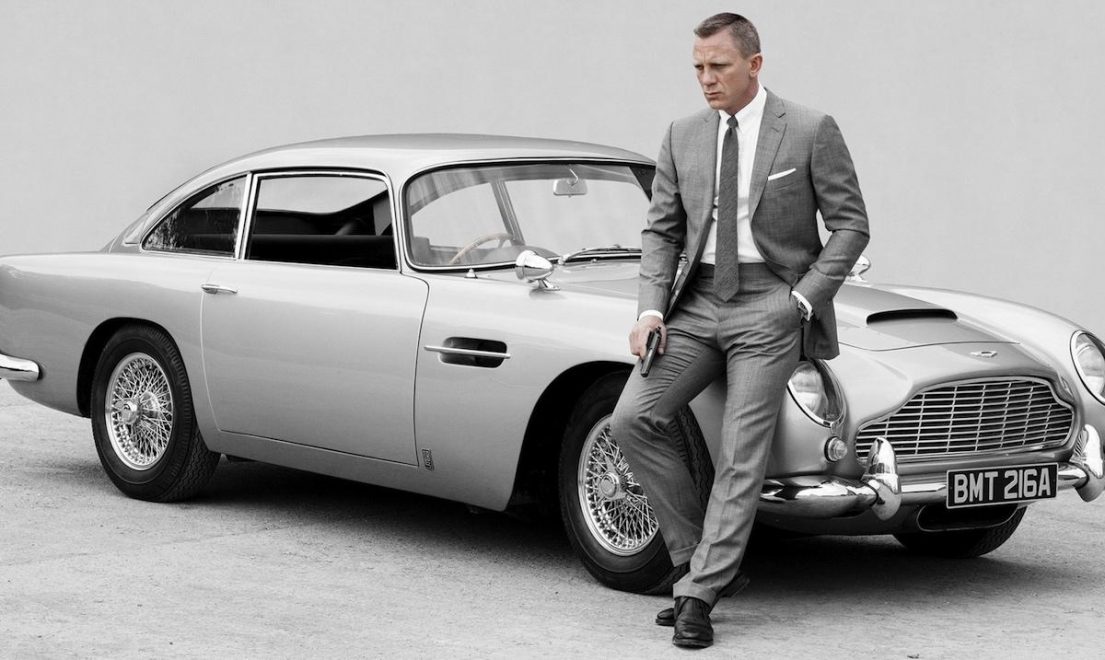 Some noted millionaires share the same thoughts
Not just billionaires – millionaires too have a thing against leaving posterity with inherited money and allowing them to dance in the lap of luxury. James Bond man Daniel Craig [worth $160 mn] for one thinks “inheritance is quite distasteful”, and mirror’s Ted Turner’s philosophy of “getting rid of it or giving it away before you go”. The actor has two children, a 29-year old from his first marriage and a 3-year old from his second and current marriage to actress Rachel Weisz. According to the Times of London, he said, “Isn’t there an old adage that if you die a rich person, you’ve failed?” 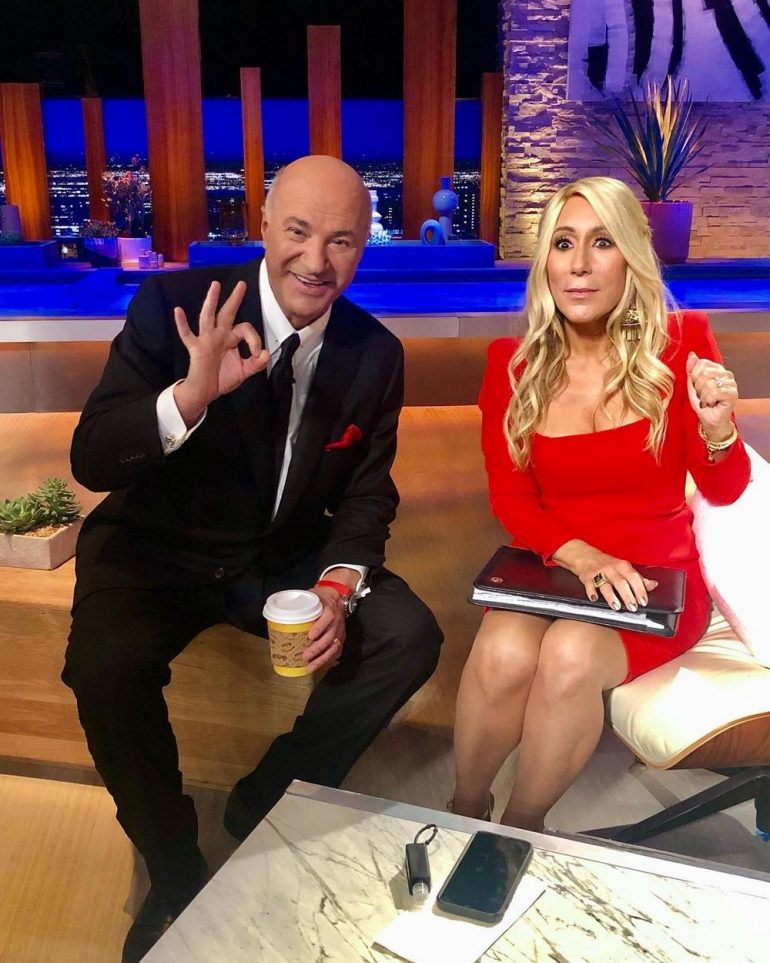 Canadian entrepreneur Kevin O’Leary [worth $400 mn] is considered to be one of the richest and most successful businessmen in the world today. He wants his children “to acquire a work ethic” and does not plan to leave his inheritance to them. In his words as reported in a news resource, “They know when their education is over, I’m pushing them out of the nest. The bird you see dead under the nest is the one who didn’t think about the future.”