Being a celebrity and an entrepreneur means that Donald Trump is used to the finer things in life. From his gold bike to his custom private jet, Mr. Trump likes to travel in style. But a jet only one part of Trumps enviable fleet of air transport, today we’re giving you a glimpse inside one of Trump’s private choppers, a thoroughly refurbished Sikorsky S-76.

Long Island based aircraft interior designer Eric Roth was hired to perform the chopper overhaul- he gutted the old and outdated interior (the Sikorsky was purchased second-hand) and outfitted it with gold hardware. Did you expect anything less from Trump? From the seatbelts to the handles, all the trimmings in this chopper are plated with 24 carat gold. Even the shelves of the Trump chopper were stocked with water- but not just any old bottled water- Trump Ice spring water. 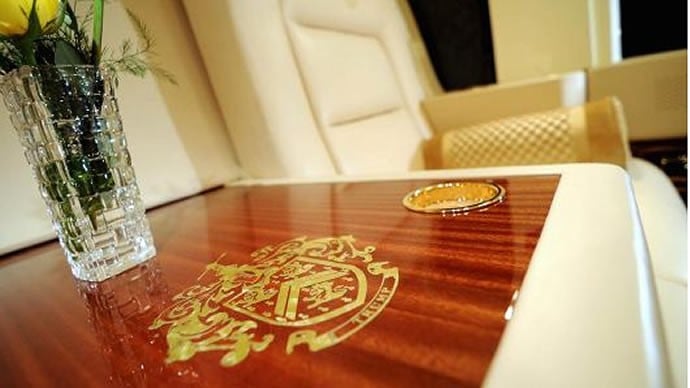 Incidentally, Roth couldn’t comment on the identity of the owner, but the giveaway was the Trump name and family crest emblazoned on the side of the chopper in (you guessed it!) gold. Pre-owned Sikorsky choppers sell for $5 million to $7 million and while Roth couldn’t comment on how much was spent on the midas inspired renovations, it is estimated that the overhaul could have cost around $750,000. “If it’s got the Trump name on it, it’s got to be the best of the best, and this helicopter is worth of his name,” Roth said.

Tags from the story
Chopper, Donald-Trump