There isn’t much you can really do with a pile of money when you already own nearly everything your mind could cook up. For times like these, we’ve come across a perfect way to splash some cash while leaving everybody else you know wide-eyed and dumbstruck. “Refurbished” by a seller known as perfectlymadebirds on eBay, this lump of mass with a frog sitting on top of it once used to be a fully functional gold Majora’s Mask-themed limited edition Nintendo 3DS. However, for reasons we simply cannot fathom, perfectlymadebirds decided to pop the gadget inside a microwave, have it transform into a mass of black nothingness and propped a taxidermied toad with a glass eye in its mouth on top of it, adding a price tag of $11,315 as finishing touches.

“I have made it absolutely beyond perfect by professionally microwaving it which to me is vastly better than anything on a canvas,” says the maker. Apparently, the 3DS was microwaved inside a 2.2 Cuft Vintage 1970S era Whirlpool Microwave Beast. All said and done, we’d still rather have our hands on a functional, non-toad-infested gold Majora’s Mask 3DS, which once retailed at just $199 and is now sold out. 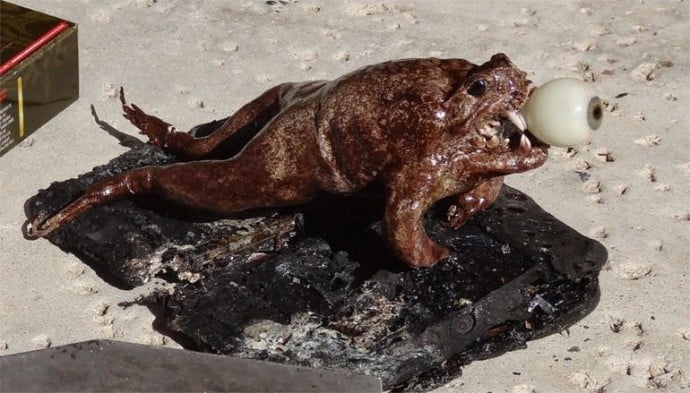