Don won Systems, Korean distributor of Pentax, presented ‘ASAHI PENTAX LX Gold’, the world’s first waterproof and dust-resistant SLR camera which was specifically made to celebrate the 60th anniversary of the company. The ASAHI PENTAX LX Gold was displayed together with ‘K10D’, Pentax’s newly launched 10-megapixels premium DSLR camera ‘K10D’ at a press event in Korea market. In 1980, shortly after Nikon introduced the third generation of the Nikon F3-series system camera, Asahi Optical Co. Ltd. Japan introduced a professional class system camera on their own; the Pentax LX. The year also coincided with the 60th anniversary of the most respectful trade name and camera manufacturing business in the business-Pentax. 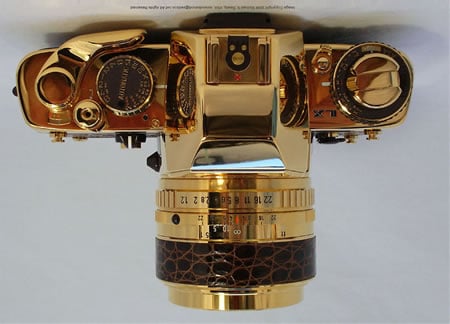 The Pentax LX gold was launched on August 25th, 1981 to celebrate the production of the ten-millionth Pentax SLR camera. It was 18-carat gold plated with brown leather (also-called lizard skin or snakeskin) and was equipped with an SMC Pentax f/1.2 50mm lens also with brown leather and gold finish. The Pentax LX Gold package included a wooden box with red lining and white silk gloves to handle the camera without leaving fingerprints on the sensitive gold plating. Both the camera and the case were provided with golden carton boxes sporting a 10million logo and 1981 lettering. Only 300 pieces of the LX Gold were manufactured, 200pcs for the Japanese home market, and 100pcs for the international market. Serial numbers for the LX Gold ranged from XM001 to XM300 (XM meaning ten million).
Source