To celebrate the 10th anniversary of the iconic V10 engine powering the R8 supercar, Audi collaborated with famous photographer and digital artist Fabian Oefner to release Audi Collection poster and a special video to go along with it. Fabian Oefner is known across the world for his intriguing “Disintegrating” series in which he captures some of the most iconic cars with the unique perspective of it exploding into its smallest of the components. Opener’s latest subject a blue Audi R8 supercar and the poster showcases the V10 engine in its most deconstructed form ever. Oefner photographed each and every individual component of a dismantled 2017 R8 from various angles, which was then digitally rearranged into a final image for the poster like a jigsaw puzzle. 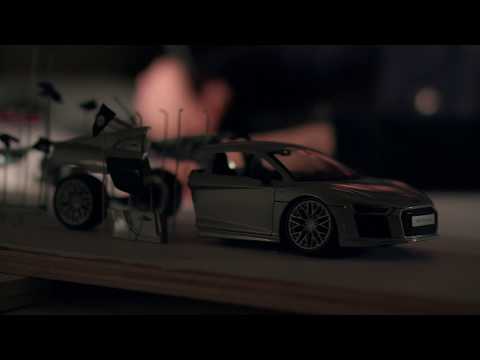 Calling it the “slowest art we’ve ever built,” the video released by Audi gives a behind-the-scenes look at the work that went into creating the poster in a hyperlapse format. In the video, Audi mechanics can be seen dismantling the R8 and its engine while Oefner meticulously captures each and everything. “The series explores essential questions about the relationship of time and reality,” says Audi, “ultimately creating a visually rich rendition of a moment that never existed.” The final outcome is a 12.75” x 30” poster that is available on Audi’s website for purchase, which can be yours for $24.95 USD.