The next-generation Audi R8 is soon going to replace the current model but the German automaker has planned one heck of send-off. Audi is all set to present its most powerful production car ever, the 2015 Audi R8 Competition, at the upcoming Los Angeles Auto Show that starts next month. This limited-edition 2015 R8 Competition model draws on the knowledge gained from the R8 LMS line of racecars. “The limited-edition Audi R8 competition is the closest road car to our R8 LMS ultra race car that has won virtually every race around the world,” said Audi’s U.S. chief Scott Keogh. It is powered by the familiar 5.2-liter V-10 of the R8 V10 model, but with output has been increased to 570 horsepower instead of the standard model’s 525 hp or Plus model’s 550 hp. 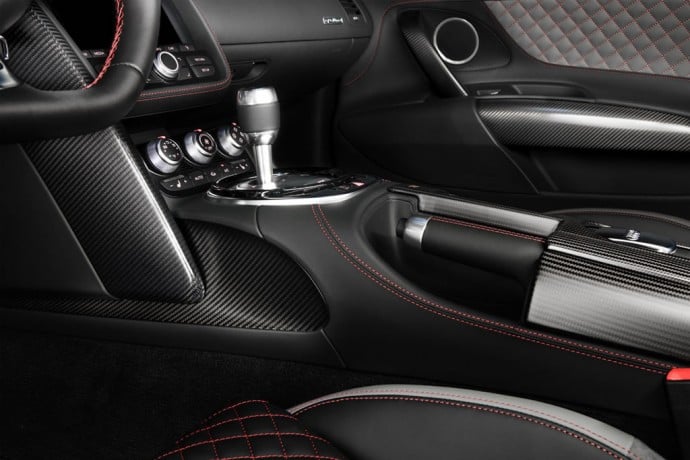 The additional 20hp helps limited R8 rocket to 60 miles per hour in 3.2 seconds and achieve a maximum velocity of 199 mph. In terms of visual changes, the R8 Competition features a host of matte black carbon fiber components, including a fixed rear wing, side blades, wing mirror caps, rear diffuser and front spoiler. The R8 Competition rides on 19-inch gloss black alloy wheels. Braking power comes from ceramic brakes finished off with red brake calipers. Production will be limited to just 60 units all destined for the US market. Orders for the R8 Competition begin in November, and deliveries should start in early 2015.