The internet since yesterday is deluged with news on the two new iPhones and the iWatch unveiled by Apple, but another beauty shared the same date to be officially unveiled. I am talking about the 2016 Mercedes AMG GT, the replacement for the gullwing SLS AMG, and it has finally arrived. After months of teasing and spying, the wraps are finally off and the first impressions of the flagship sportscar of Mercedes is that it is all that we had expected it to be – stunning! The first thing you’ll notice other than the obvious similarity with its predecessor is its name – there is no Benz in the name and the automaker chose to give it a proper Mercedes-AMG designation. Tobias Moers, CEO of Mercedes-AMG GmbH had previously said: “The new Mercedes-AMG GT proves that we will be positioning AMG as a dynamic sports car brand even more strongly and aggressively than before.” This is the second car to be entirely developed by AMG and will roll out exclusively from AMG’s Affalterbach facility in Germany, but we don’t know whether this new nomenclature will set a new precedent for future cars from the Mercedes-AMG stable. 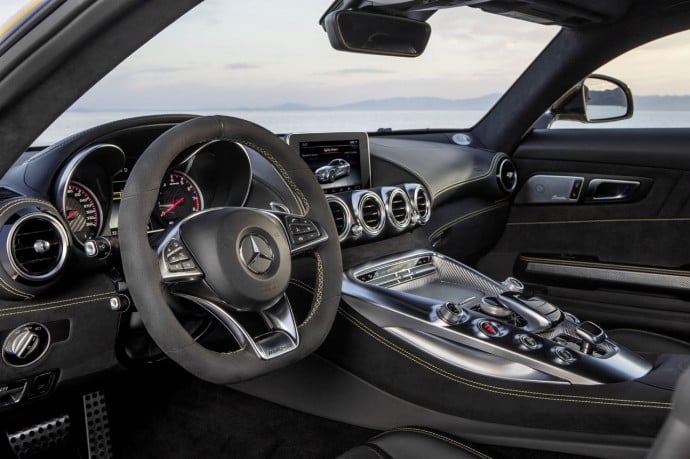 The Mercedes AMG GT will arrive in two trims, the GT and the GT S, both powered by the new 4.0-liter, twin-turbocharged V8 with dry-sump lubrication, dubbed the M178. Both trims have their engines mated to seven-speed dual clutch transmissions that deliver power to the rear wheels. The standard GT boasts a healthy 456 horsepower and 443 pound-feet of torque. The performance figures released by the company claims that it can sprint to 60 miles per hour in 3.9 seconds and carry on to an electronically limited top speed of 189 mph. On the other hand, the GT S makes 503 hp and 479 pound-feet to reach 60 in an estimated 3.7 seconds all the way to a limit of 193 mph. 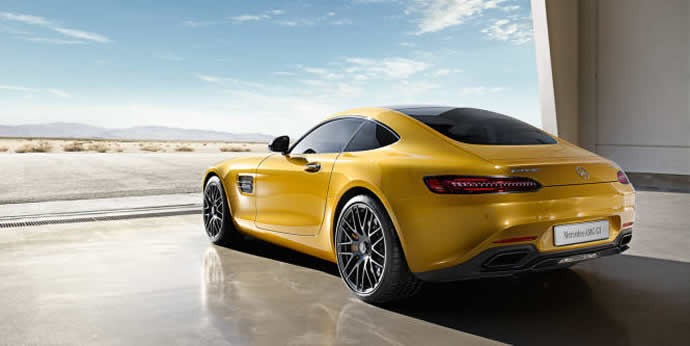 With the overall engine size reduced from the previous SLS AMG, the car is better balanced- a 47:53 weight distribution from front to rear. The trick drivetrain is wrapped up in an aluminum spaceframe chassis with a double-wishbone suspension at all four wheels, boasting of aluminum-forged parts.As for the styling, the gullwing doors have been replaced by normal ones but the overall design is still very crisp and draws its inspiration from the original 300SL. Up front, the big Mercedes star nestled in an oval grille with two massive air intakes at the lower corners are the most prominent elements. The back looks wide thanks to the long, slim taillights poking out to the hefty rear fenders. There’s an electronically controlled rear spoiler which remains well hidden till it’s not deployed. 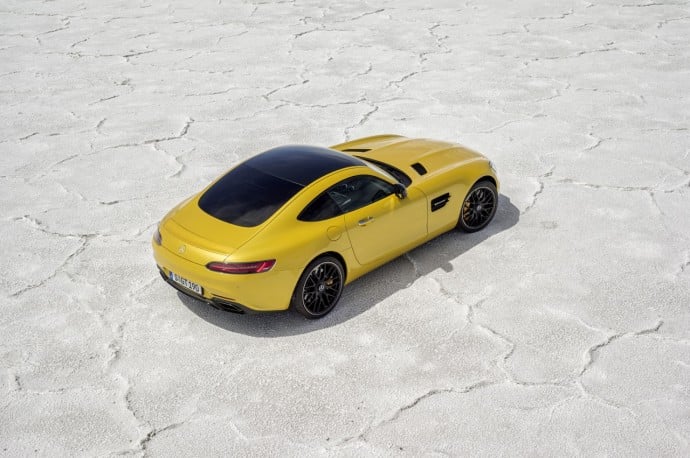 On the inside, the cabin carries an aviation-theme. The drivers can play with the powertrain’s various modes and settings via the AMG Drive Unit controls on the center console. Mercedes calls it the Drive Unit and it’s supposed to be reminiscent of the V8’s cylinder layout but the design is quite busy and not very good to look at. The pricing is yet to be announced but what we know till now is that the 2016 AMG GT S will be launched in the US in the spring of 2015, and the standard GT will arrive a year later.