Aston Martin announced last year that it’s all set to build 25 continuation cars of the iconic DB5 sports car which will be near-replicas of the James Bond’s car from the movie “Goldfinger.” And when Aston said replicas, they didn’t just mean aesthetically similar but promised to equip the continuation cars with all the functional, uber-cool 007 gadgets. The British carmaker has finally revealed the details on those gadgets and other information on the car along with videos and pictures of the build. And guess what? All the gadgets except for the gun and the ejector seat are functional; how cool is that! The list of gadgets that will feature on the DB5 Goldfinger continuation car is extensive. 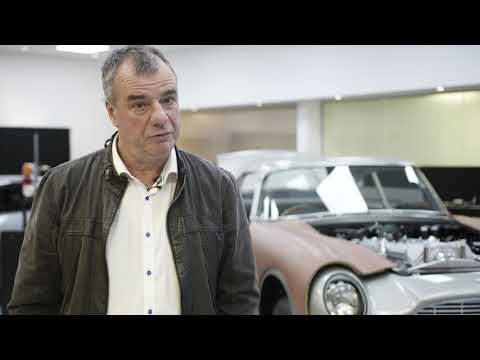 Beyond the movie-accurate Silver Birch paint, the $3.75 million Aston Martin will come with a rear smoke screen delivery system, rear simulated oil slick delivery system, revolving number plates front and rear, non-functional twin front machine guns, bullet resistant rear shield, and battering rams at either end of the car. These are just the gadgets fitted on the outside. Inside the cabin, the car gets simulated radar screen tracker map, a phone in the driver’s door, gear knob actuator button, armrest and center console-mounted switchgear, storage space for weapons under the seats, and optional ejector seat. The gadgets are being designed partly by Aston Martin Works’ engineers along with the help of Chris Corbould and his team. Corbould is a British special effects coordinator who has worked in 11 James Bond films since the early 1980s.

“The main challenge has been to recreate the gadgets from the film world and transfer them into a consumer product,” Corbould said. “We have a license in the film world to ‘cheat’ different aspects under controlled conditions. For instance, we might have four different cars to accommodate four different gadgets. We obviously don’t have that luxury on this DB5s as all the gadgets have to work in the same car all the time.”

Aston Martin released a video showing the progress on the smoke screen, oil slick and machine guns. Since the continuation cars will be equipped with such gadgets, they won’t be road legal, which means the owners won’t be able to drive them on public roads or race tracks. The first engineering car is still being built, but the customers who have put down the money to own one of these insane machines will get their bond car somewhere in 2020.

Tags from the story
Aston-Martin, James-Bond