On the eve of Los Angeles Motor Show, Bentley has unveiled its new Grand Convertible concept. Though the Grand Convertible is technically a concept, and has not been confirmed for production yet, but it looks production ready by all means. It is described by Bentley boss Wolfgang Dürheimer as “the ultimate expression of British automotive luxury,” and “the most sophisticated open-top car ever created by Bentley.” The same 6.75-litre twin-turbocharged V8 engine as the Mulsanne and Mulsanne Speed powers the model. Bentley quotes official power output figures of 530bhp and 811 lb ft – the same as the Mulsanne Speed. In that car, the engine is capable of delivering a 0-62mph time of 4.9 seconds. 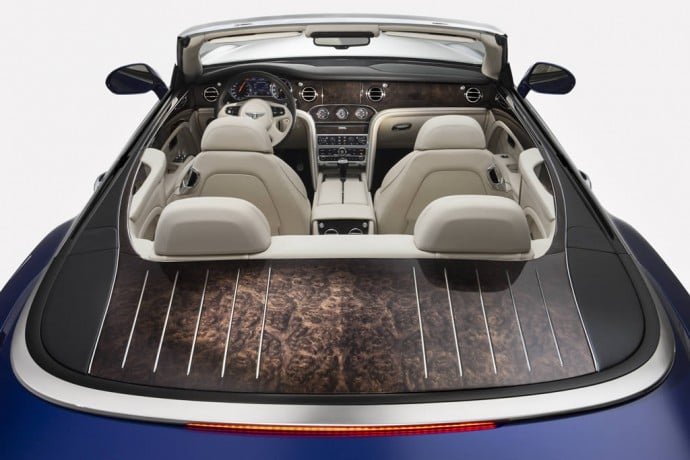 The Bentley Convertible concept is finished outside in Sequin Blue with a “liquid metal” hood and windshield frame and a burl walnut veneer on the tonneau cover – a similar combo used to introduce the Rolls-Royce Phantom Drophead Coupé eight years ago. On the inside, the cabin is covered in Beluga leather with blue cross-stitching. The wooden tonneau cover is the largest piece of wood veneer yet seen on a Bentley, and it’s made by hand. Meanwhile, the interior contains no fewer than 14 leather hides, lashed together with more sequin-colored stitching. Hinting that the concept is likely to reach production in strictly limited numbers, Dürheimer said: “We are eagerly awaiting the response of our customers to this car. We will ensure that this car – if it reaches the roads – will be a highly exclusive, extremely limited collector’s piece.”