If you’re someone like me who got captivated by the podracing from the movie ‘Star Wars: Episode I – The Phantom Menace,’ there’s good news. In the near future, flying car races will be more common than you can imagine. We’ve already seen an Australian company by the name of Alauda Aeronautics create a flying racing car by the name of Airspeeder Mk3 for the first-ok-its-kind racing series. The company even carried out the world’s first electric flying drag race that took place in November, last year. Well, the Airspeeder Mk3 has new competition in the form of the S11 ‘carcopter’ concept that has been revealed at the 2022 CES by a French startup called Maca Flight. In fact, both the flying race cars look very similar. However, unlike the Airspeeder Mk3, the Maca S11 is not powered by a conventional battery but a hydrogen fuel cell.

Maca Flight’s booth at the CES has a 1/3-scale model of the S11, which gives an idea of how it’ll look when the final version is built. The company planned to offer an augmented reality experience at the tech show to “feel the power and excitement of autonomous flight over a broad variety of landscapes and terrains.” Sadly, no visitors are allowed in CES this year due to the sudden surge of Covid-19 cases. What a bummer! But you can experience it sitting at your home by simply scanning a QR code on their website.

The S11 features three pairs of electrically-powered rotors, one pair in the front and two at the back. The crazy aero elements make the racer look more like a flying version of the modern F1 car. In fact, the S11 will be trialed on racing test tracks with the carcopter flying just a few feet above the ground like the podracers from Star Wars. Measuring 23-ft, the carcopter gets a metal chassis and a frame made of carbon, linen, and wood. Maca says the S11 racers will be able to reach speeds up to 155mph and they’ll be fitted with sensors to avoid collision amongst each other. While the S11 features a cockpit with a transparent canopy, it’s still not ready to carry passengers on board. According to the company, the S11 will be ready to hit the market by June 2023 and will carry a price tag of around $900,000. 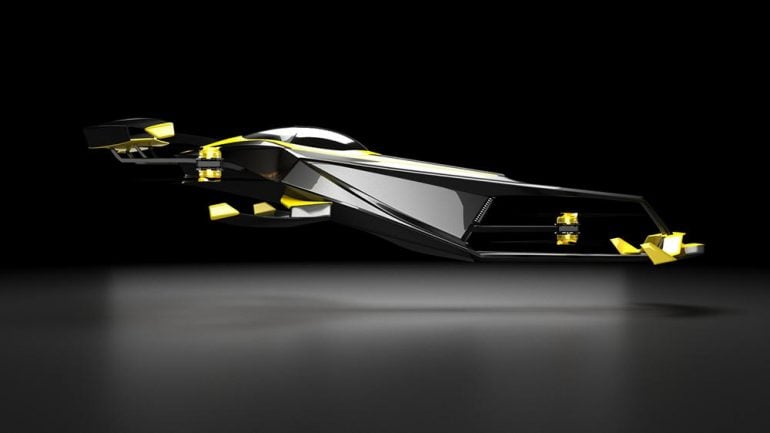