Germany-based motorhome specialist Volkner is known for building some of the most luxurious land yachts. Over the years, we’ve seen some amazing creations by the company, including the recently revealed new Mobil Performance S. The highlight of the $7.7 million luxury RV is its underbelly garage that has enough space to fit a Bugatti Chiron. Now, how crazy is that! Recently, Beverly-Hills-based YouTube influencer Enes Yilmazer got a chance to check out another version of the new Mobil Performance S. He decided to give us a tour of both inside and outside of the luxury giving us a closer look at details we might have missed while looking at the official pictures.

This version of the Volkner Mobil Performance S is priced at $2 million, which is substantially cheaper than the one we saw a few months back. However, it still gets the RV’s most striking feature – the secret garage. The customer who ordered this motorhome wanted a garage that can fit his Mini. But as you can see from the pictures, the underbelly garage can also fit a Porsche 911, which is pretty wide and long. The H-shaped steel frame of the RV opens enough space in the belly to accommodate a normal-sized car. On the press of a button, a hydraulically operated steel floor plate slides out which can be used for parking the car. 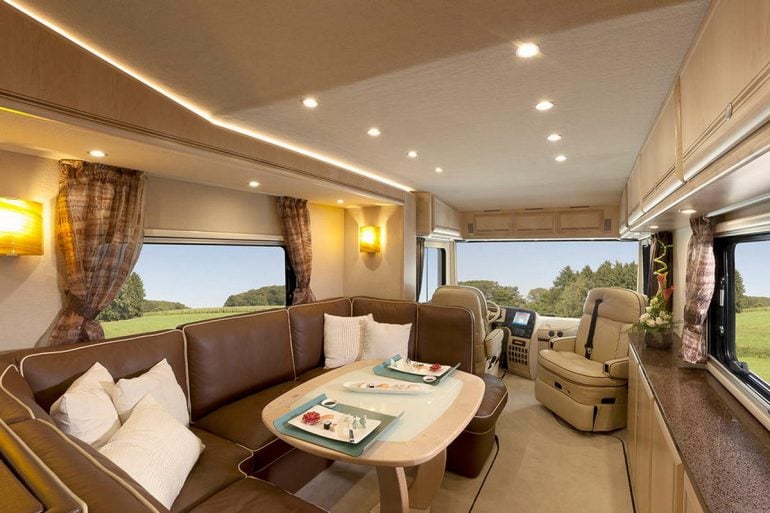 On the inside, the Mobil Performance S feels more like a luxury villa on wheels thanks to the beautifully appointed interior. Just about everything inside the cabin can be customized according to the customer, including things like real wood accents, marble countertops, two 40-inch displays, a separate bath/shower, and a full kitchen. The two captains’ chairs at the front are not only heated and cooled but also feature a massaging function. They can also rotate 360-degree. The lounge area is just behind the front seats and it can quickly be transformed into a workspace. Right at the back is the main sleeping area which has a double bed, mirrors, plenty of cabinets, awning windows, and starlight. The vehicle has storage for an 800-lt fresh water tank, a 600-lt blackwater tank, and a 300-lt toilet tank. The RV is powered by a Volvo-sourced diesel engine that produces 460 hp, while the 2,400 kW solar panels mounted on the roof supplement the power supply. 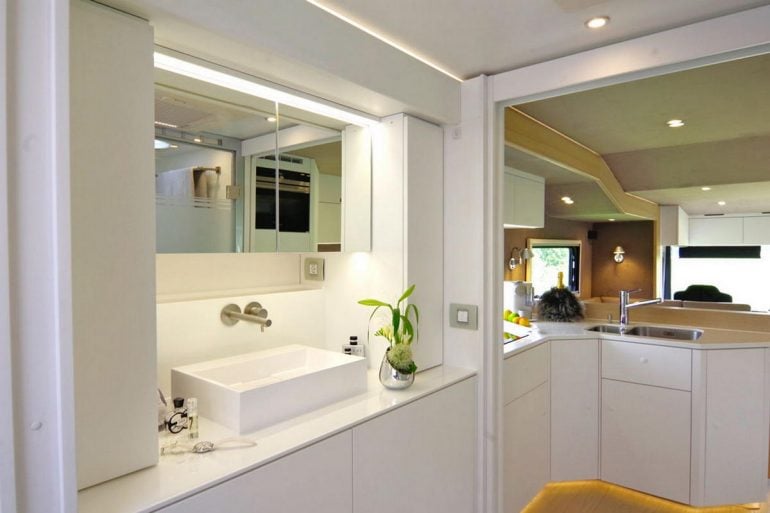 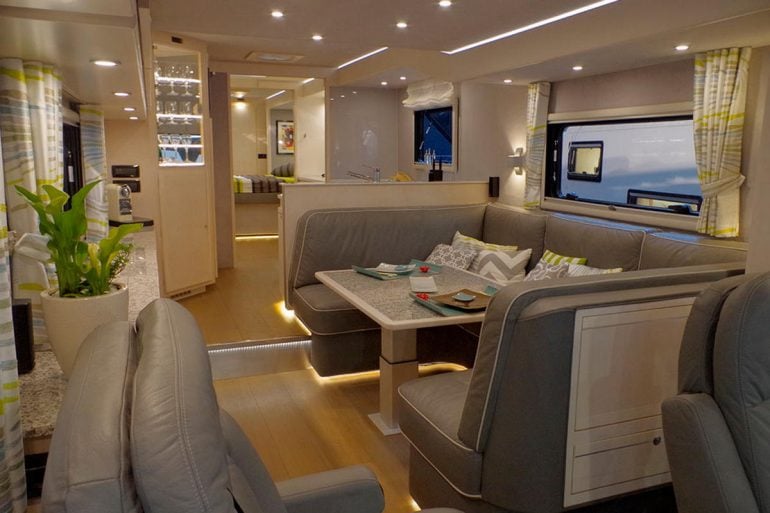 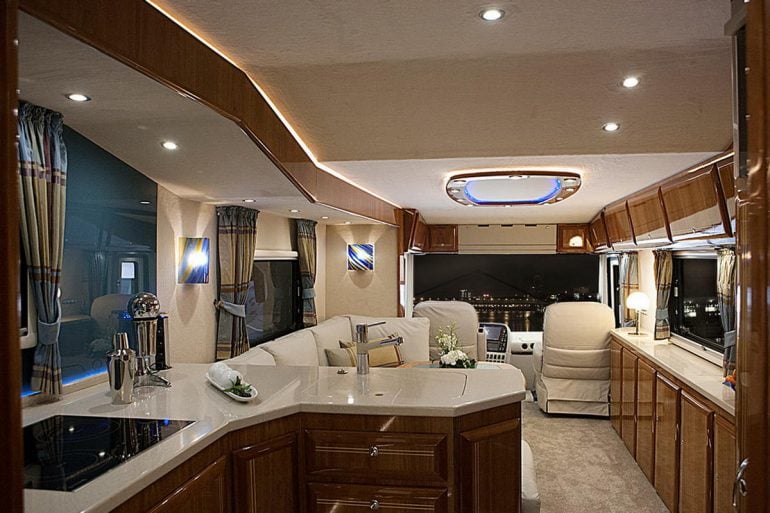 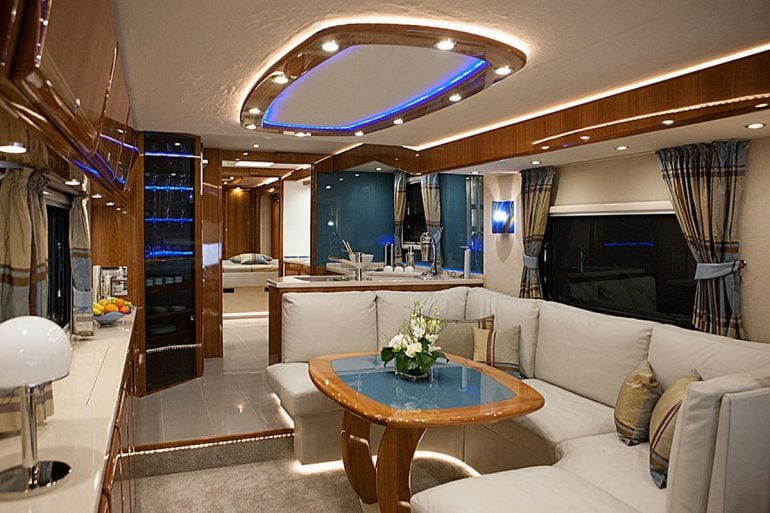 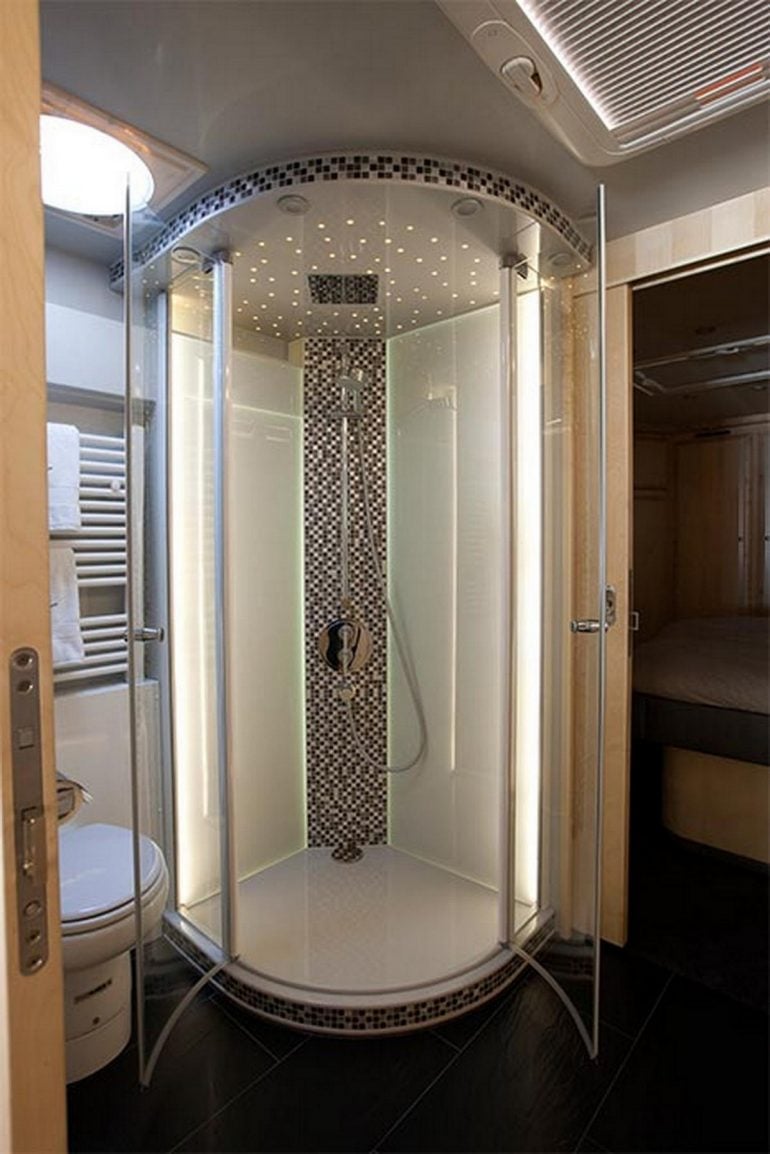 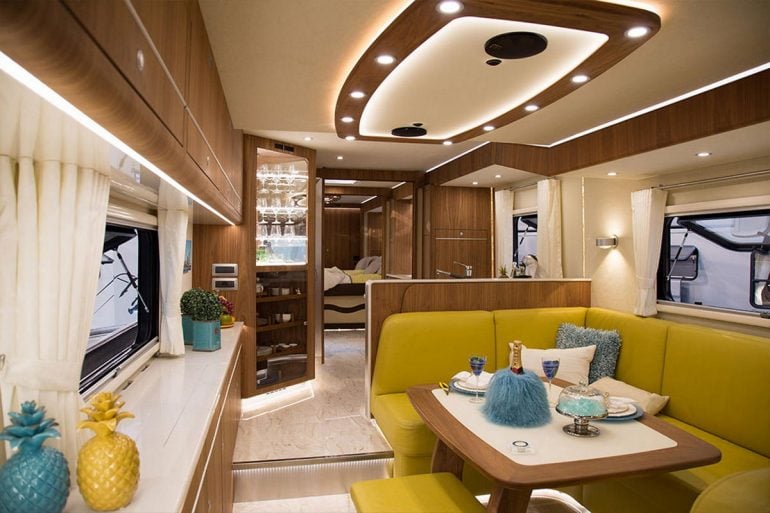 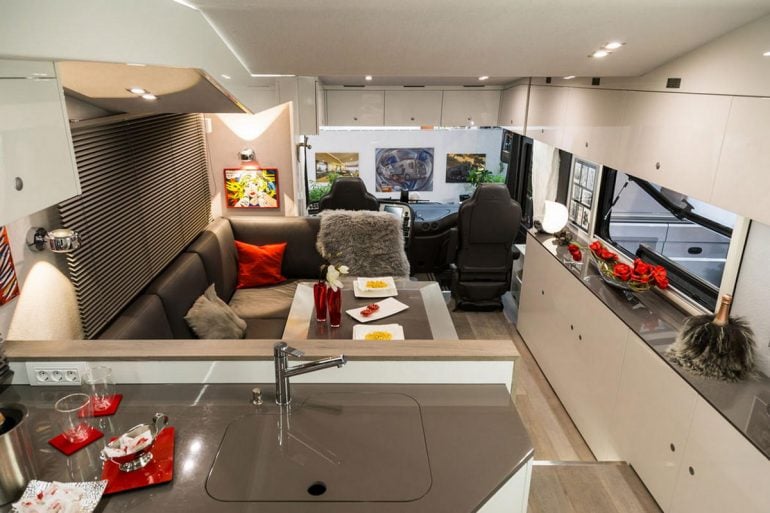 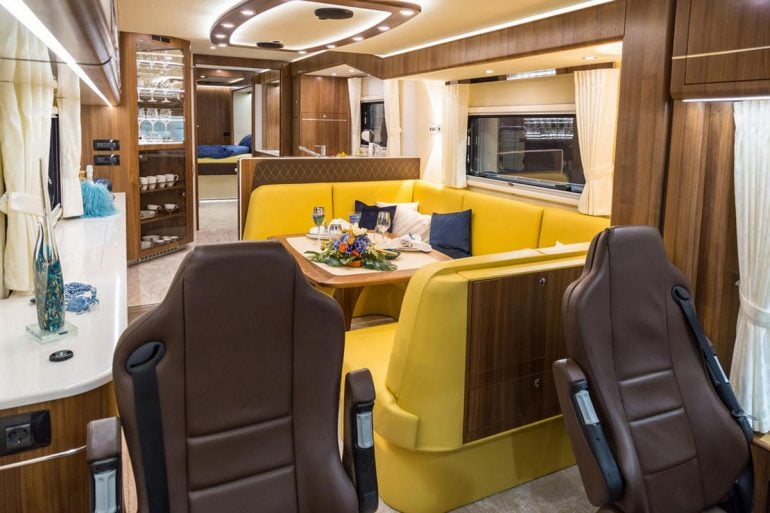 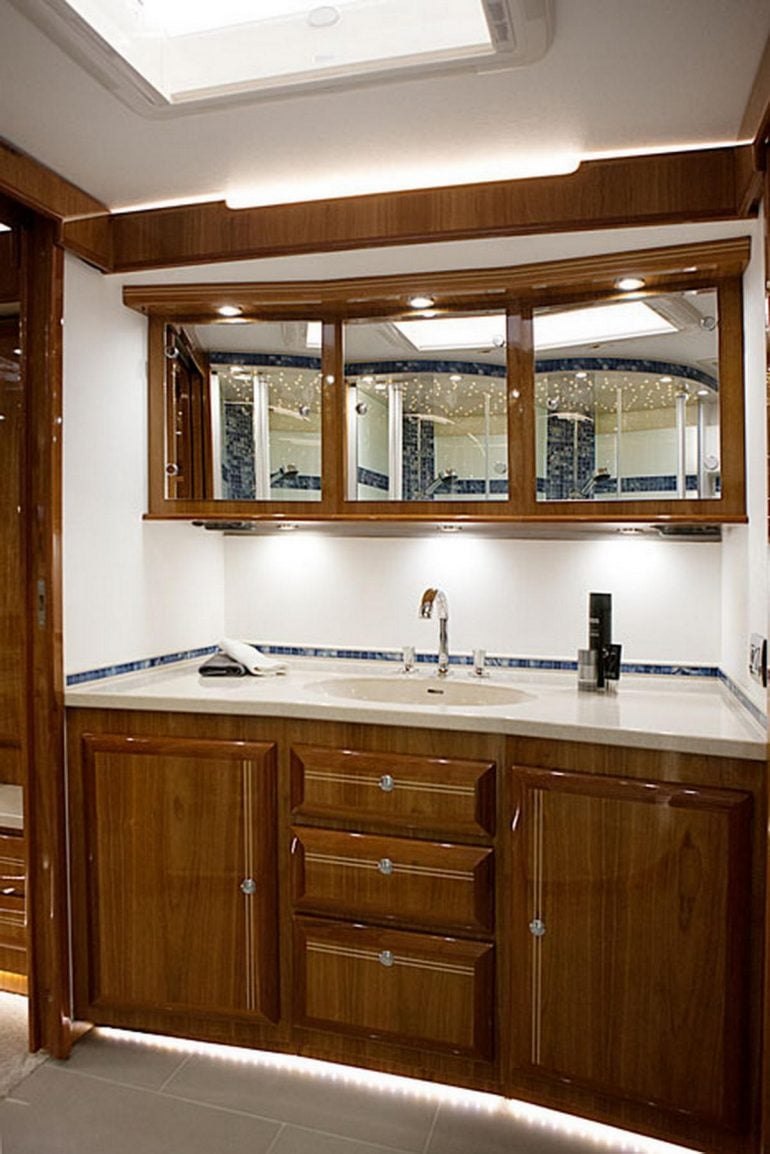 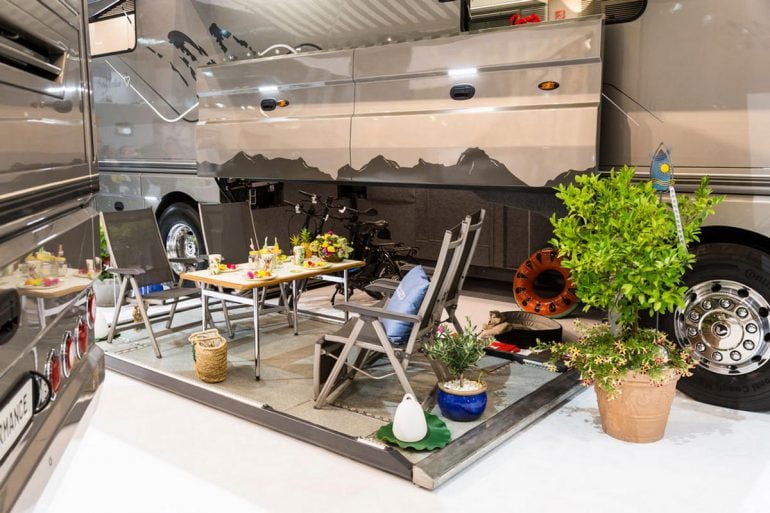 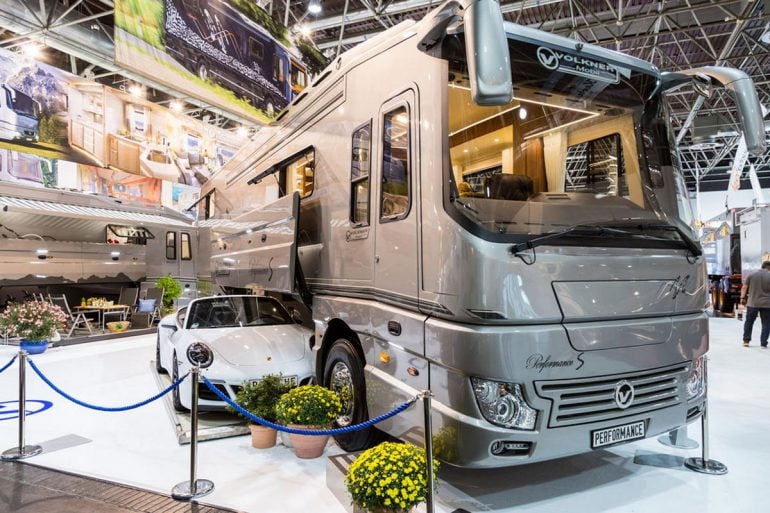 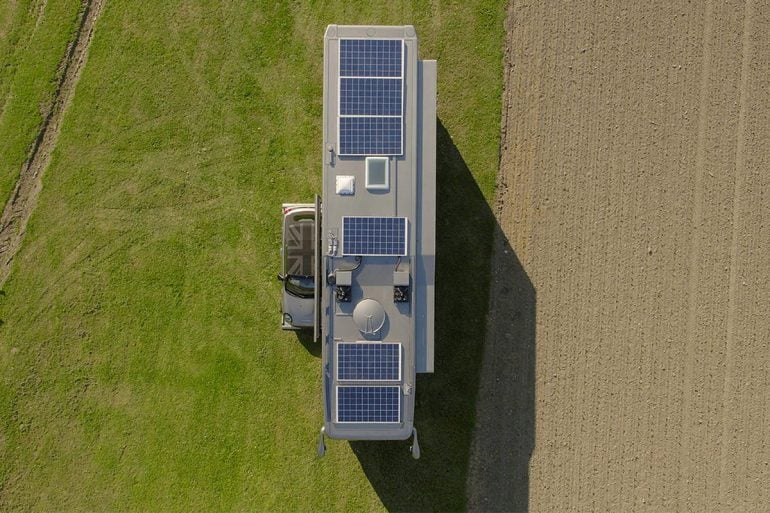 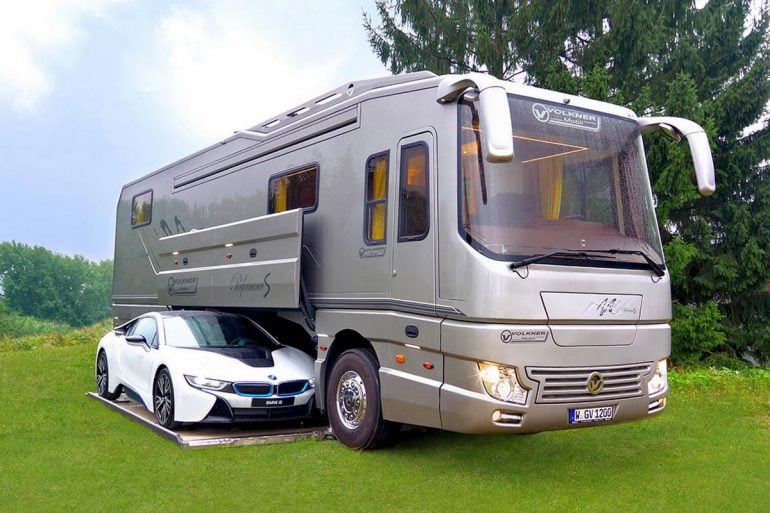