A gigantic tulip – 96 metres tall – greets passengers even before you touch-down at the sparkling new Istanbul International Airport. The ‘tulip’ is an ingeniously designed airport traffic control (ATC) tower – brought to life by Pininfarina +AECOM – that curves gracefully to recreate the pattern of a flower-in-bloom. If you’re flying in (or out), by night, you’ll see the tulip bathed in a crimson-red glow.

Ground-breaking architecture
The tulip is the national flower of Turkey and holds cultural and historical significance; the Ottomans fell in love with the native flower, and under Suleiman the Magnificent it evolved to a symbol of nobility and (their) discerning taste. Over the next few decades, the love for the flower only grew such that poets waxed lyrical about it; it was a popular motif in paintings; an architectural element, etc. Incidentally, a grey tulip also features on the fuselage on the national carrier, Turkish Airlines. That this form of organic architecture is a 21st-century ATC tower is also symbolic; it is a spectacular showcase of the merger of technology, nature, and centuries-old history.

Look closely at the airport and this theme-of-three almost seems to define the space: The terminal – designed by London-based Grimshaw architects along with Haptic Architects and the Nordic Office and Architecture – is bright and airy, defying the usual designs of airports as sombre spaces in solid blue and grey shades. The floor-to-ceiling clear glass allows light to stream into the terminal; the ceiling itself is a canopy complete with skylights. The roof-arches seem at once aerodynamic with their sharp rib-vaulted design, while the dome as a whole harks back to Ottoman architecture. Add to this the transit hall, which has been shaped to replicate the natural flow of the Bosporus Strait. To keep up with the digital era, there’s also a larger-than-life “Istanbul” sign in the middle of the main terminal. 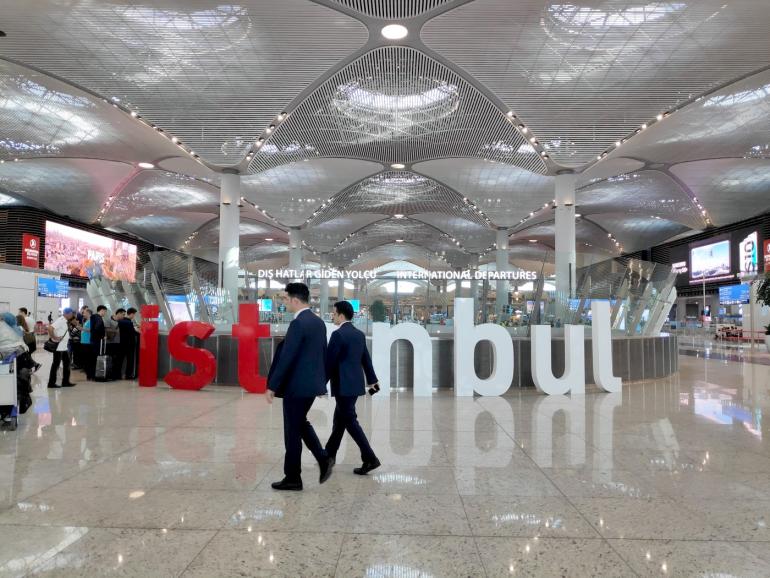 More than a pretty face
The airport is among the World’s biggest airports at a whopping 18,780 acres (76.5 million sq. metres), making the hub larger than Manhattan. When complete, it will have the capacity to handle 200 million passengers a year and flights to over 300 destinations across the globe; only phase I of the airport has been completed, so far, and it will see passenger traffic of 90 million within the year. Currently, the Hartsfield-Jackson Atlanta International Airport is the busiest in the World with 107 million passengers passing through it annually.

Given the ambitious size of the project, Istanbul’s airport is located north-west of the city and about 20-odd miles from the city-centre, in the Arnavutkoy District in the European side of the city that straddles two continents. Currently, a taxi ride seems the fastest, most convenient way – 50 minutes – to the city-centre. Alternatively, you could take the airport shuttle bus. However, a high-speed metro line that leads into the city is also in the works. For those looking to stay closer to the airport, the Yotel wears yet another tag – biggest airport hotel in Europe, with a total of 451 rooms; 277 landside and 174 airside. 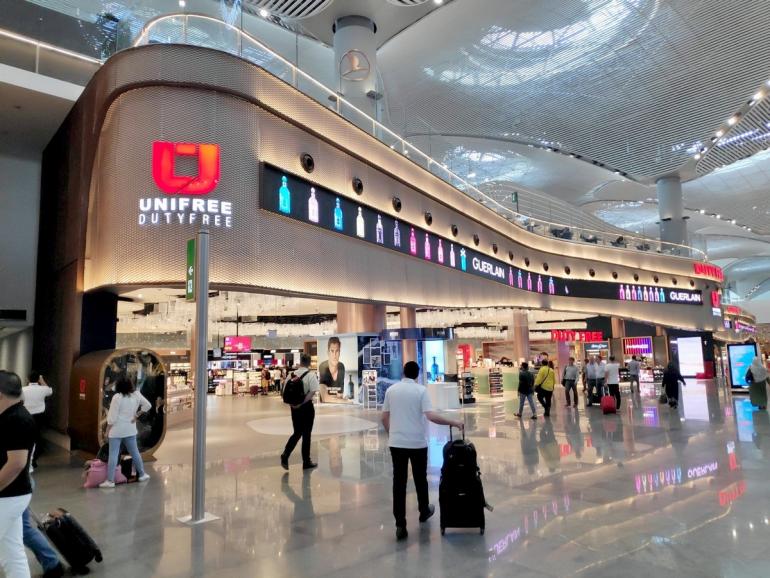 Looking to do some last-minute shopping? The airport is set to unveil a whopping 53,000 sq. metres of retail space. While still underway, a small fraction of that area – 8000 sq. metres to be precise – is already operational and showcases the world’s most luxurious brands. You can find International names such as Hermes, Gucci, Dior, Armani, to home-grown brands such as D & R, Luzdemia, Dogo, and more.

At 32,000 sq. metres, when complete, the food and beverage area is set to be larger than a few International airports! The completed phase currently offers a variety of International food chains, and much-loved Turkish cafes and restaurants. 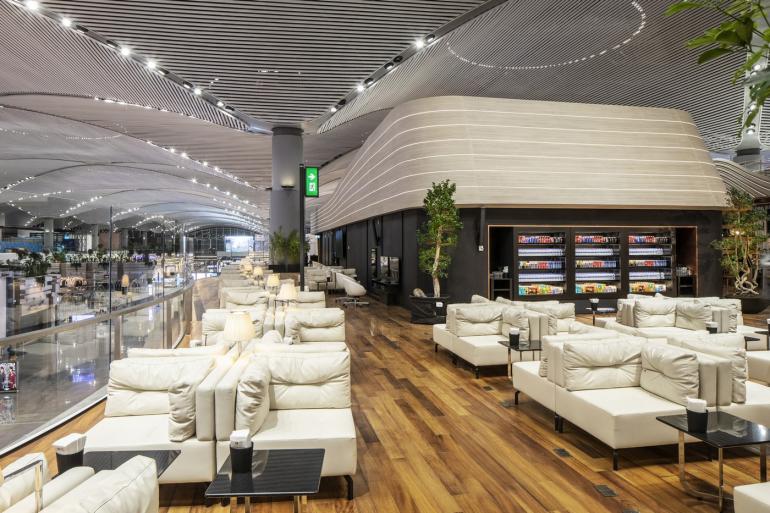 Turkish Airlines Lounge
Turkish Airlines loyalists may remember the lounge at the old airport that held a 100-year-old olive tree, smack in the centre. While the tree didn’t quite make it to this lounge, nature makes her way here in the abundance of sunlight that streams into the lounge. White sink-into sofas and dark wood floors lend a cosy, warm appeal. 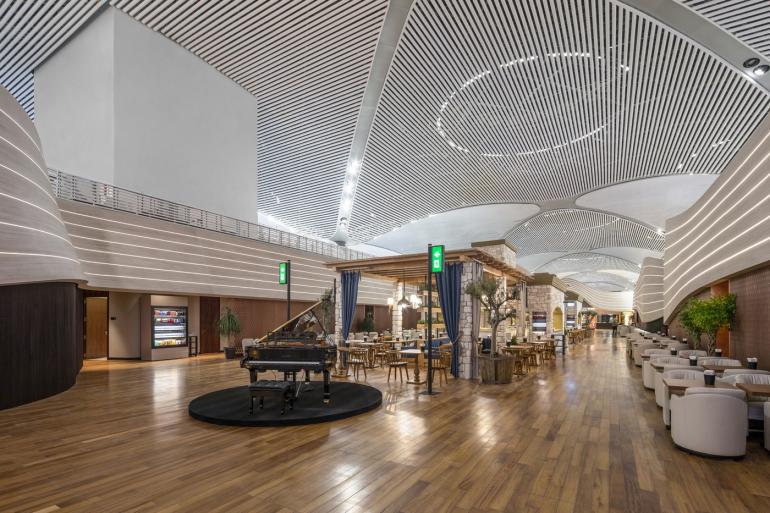 As you enter, you’ll be greeted by an all-black piano that plays itself! The sprawling space can seat 765 passengers and comes with the usual treats (food and beverage areas, showers, etc.), but also features the unexpected such as a museum. Walk in to find artworks that have been borrowed from the Istanbul Museum of Modern Art.

A corner for Turkish tea attracts the largest crowds with a table that features an ornate samovar, clear-glass as also hand-painted pasabahce, vessels filled with Turkish delights, dates, etc.

The many food and beverage counters feature everything from Turkish delicacies such as succulent kebabs, platters of mezze, stuffed dolmas and fish, koftes, baklava, etc. Or you can opt for continental cuisine, light bites, healthy juices, etc.

There’s also a golf simulator to keep you busy, an area dedicated to video games, a play area for kids where a life-size model of an airplane makes an appearance.

If you’re just looking to catch up on work, plug into the hi-speed Wi-Fi available throughout the lounge, or head to the business centre. But if all you want to do is catch a few winks, the lounge also has private suites. Sometimes, the journey really is the destination!

Tags from the story
Airport, Istanbul