This year marks the 50th anniversary of one of the most important events in the history of mankind – the first manned mission to the moon. The Apollo 11 lunar mission also immortalized Omega Speedmaster as it became the first watch to successfully complete a visit to the earth’s own satellite on the hands of Neil Armstrong and Buzz Aldrin. We all knew and have been waiting for Omega to reveal a special edition, a tribute timepiece to celebrate this momentous occasion. This is it; meet the Omega Speedmaster Apollo 11 50th Anniversary watch. Celebrating the golden jubilee of the lunar landing, the new commemorative model has a 42mm stainless steel case highlighted by Omega’s new 18-karat Moonshine gold that debuted on the solid gold variant earlier this year. The new patent-pending alloy was developed by the watchmaker for long-term color stability and has a slightly less shiny appearance than yellow gold. 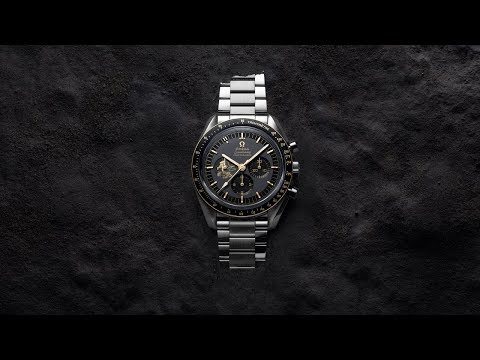 The 50th Anniversary Steel version is powered by Omega’s newest manually wound movement, caliber 3861. The same movement is featured in Omega’s all-Moonshine Gold sibling. There are several design cues that pay tribute to the Apollo 11 mission. The watch has a grey dial with black sub-dials for the chronograph minutes. The Moonshine gold is also used in the beveled hour markers and the hour, minute and subdial hands. The 9 o’clock subdial exhibits Buzz Aldrin climbing down the lunar module’s ladder, while the applied “11” Arabic hour numeral replaces the baton marker at that spot. Turning the watch over, the Naiad-locked case back features a deep laser-engraving onto a moon-surface texture along with the image of an astronaut’s footprint. It is accompanied by Neil Armstrong’s legendary quote: “THAT’S ONE SMALL STEP FOR A MAN – ONE GIANT LEAP FOR MANKIND.” The watch comes on a brushed metallic bracelet with Apollo-era correct safety clasp, but an additional Velcro strap in blackened cork with golden marks is also included in the NASA-themed presentation box. The tribute timepiece is limited to 6,969 pieces in total and is priced at $9,650.