What’s a movie buff who doesn’t catch the details in every scene? From actors’ costumes to the food they’re eating or the drink they’re sipping, from the way they’ve worn their hair to the discrete props in their lair – the real magic of cinema lies in these often-missed details. Watches in films, however, have no discreteness about them. They’re bold and visible and almost always leaving a mark, in some cases, bigger than the scene itself. Some see these as product placements, while others owe the entire integrity of the scene to the presence of the timepiece. Whatever the justification, one cannot deny how alluring certain watches look on the wrists of some phenomenal cinematic characters.

While it’s quite impossible to call out every happenstance of seeing a watch in every fabled scene, we’ve picked some of the most legendary horological cameos in the history of movies. 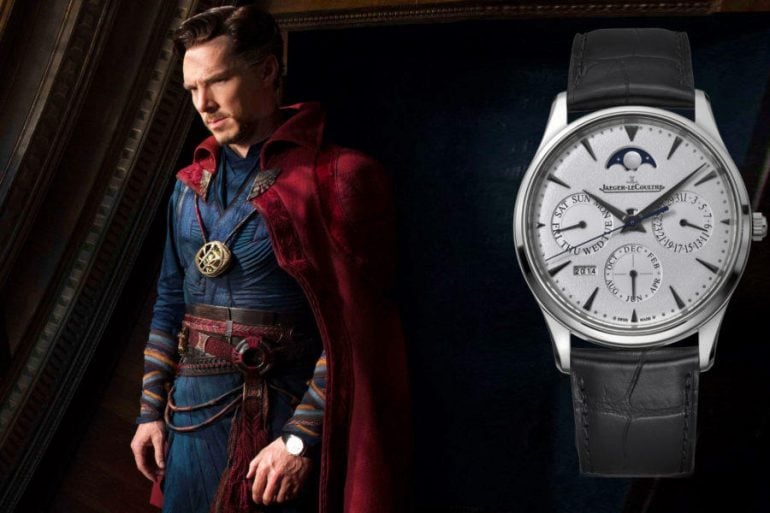 Doctor Strange feat. Jaeger-LeCoultre Master Ultra Thin Perpetual
Quite symbolic, as some would say if the possessor of the Time Stone were to don a watch. And why wouldn’t he need one, with all the moon phases he travels through? Doctor Strange flamboyantly sports the enchanting Jaeger-LeCoultre Master Ultra Thin Perpetual with its perpetual calendar. It makes a stark (pun intended) appearance when the mystical Avenger’s watch winder is set in motion. The watch is a beautiful assemblage of three sub-dials, including a perpetual calendar, that doesn’t seem too far out of character for Dr. Strange. 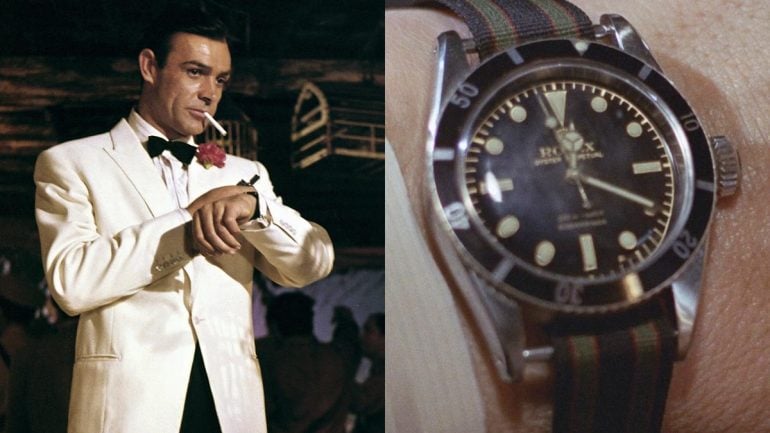 Thunderball feat. Rolex Submariner Ref. 6538 “Big Crown”
Well, now, how could we curate a list without a Bond watch? Ian Fleming had imagined James Bond to be the Rolex-wielding spy, and no movie-maker would discount this essential credential of the character. Sean Connery, who is arguably the most Bond Bond to have ever been, sported the Rolex Submariner Ref. 6538 all through the scenes of the movie. If you look closely, you will notice how he goes from leather to nato straps. Thunderball seems to be a big-old Rolex advertisement because it endorses the fact that the legendary Big Crown can be worn under a tux, just as comfortably with a polo t-shirt. 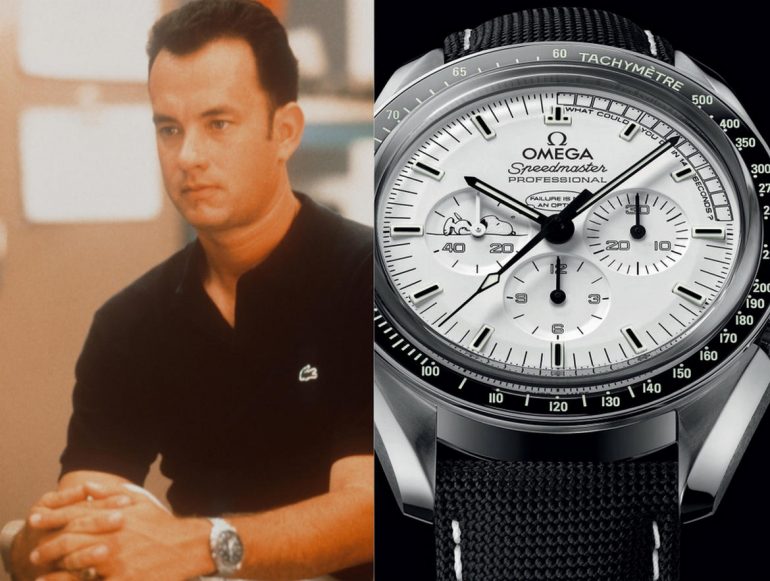 Apollo 13 feat. Omega Speedmaster Professional
Apollo 13 was an adaptation of a real-life event, so it had to get the details right. Details included the fact that the real mission saw the Omega Speedmaster Professional enter space. The choice of which watch should be donned by the actors in spaceman suits was quite an obvious one. The makers went back in time to pick the right rendition of the Speedmaster, that was donned by the actual astronauts, and that’s the beauty of the detail. The beautiful black dial and steel bracelet timepiece was certified for spaceflight by NASA and played an important role in the film to help the spacemen perform the 14-second maneuver in the hopes of returning to Earth. 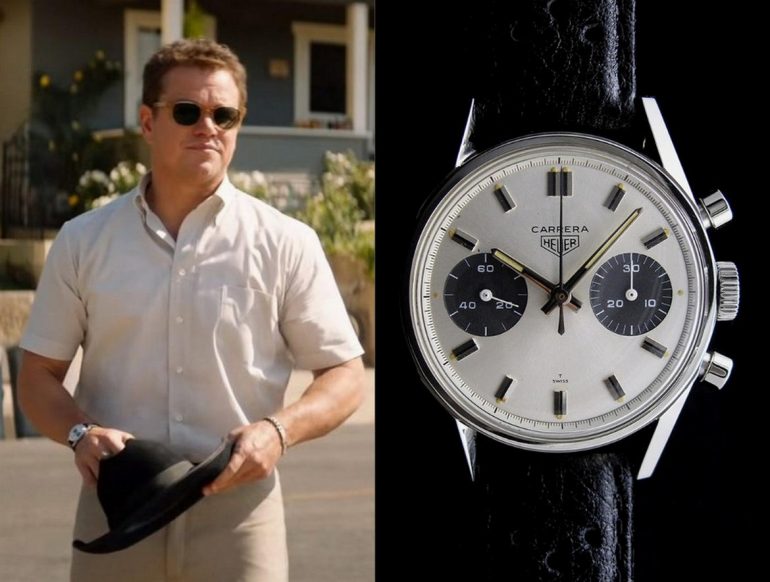 Ford vs Ferrari feat. Heuer Carrera 7753SN
Heuer watches are known for their precision and attention to detail. One can imagine these exact traits in the characters of the Oscar-nominated masterclass, Ford vs. Ferrari, that pitted Christian Bale in his race against time on the race track, leading up to the 1966 LeMans battle between the two automobile giants. Matt Damon, who plays Carroll Shelby, pays homage to the Carrera 7753SN, albeit the one he wears during the scene isn’t the exact piece. The watch was picked by Shelby because of the ease of reading time on it. It is uncluttered, precise, and works through all the g-force that Shelby could muster in his machines. 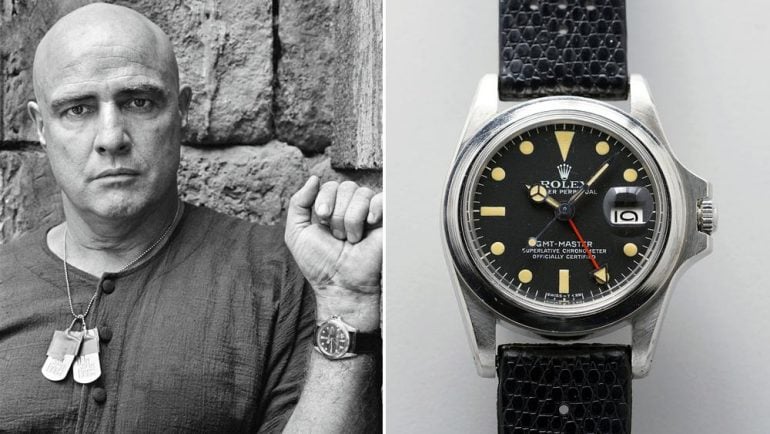 Apocalypse Now feat. Rolex GMT Master 1675
You put anything on the original Godfather of cinema, and it becomes a relic. As did the Rolex GMT Master 1675 that was sported by Marlon Brando in the cult classic, Apocalypse Now. While the watch, at that time, seemed to be far too modern for the setting of the film, it did belong to Brando’s personal collection. And so, for the good of the game, he took off the sleek looking bezel and wore it anyway, all through the filming. The watch fetched nearly two million dollars in an auction in 2019. It bears a black dial with distinct gold hour markers and a date at 3 o’clock.

Casino Royale feat. ‘Omega’
The story of how James Bond went from a Rolex-wielding super-spy to an Omega-sporting one, is a legend. While Rolex did enjoy the presence of its products in the world’s most famous spy franchise, they never really paid the makers for the product placement. It was just natural and true to the original story of James Bond. And so, in a bidding war, the mantle was handed over to Omega, making headlines in the world of horology. In fact, Daniel Craig rather blatantly brags about his non-Rolex Omega, in Casino Royale. This seems to be the future timepiece of all Bonds to come, unless, of course, we have another twist in the tale.