Luxury wristwatch and jewelry brand Jacob & Co. partnered with legendary Portuguese soccer star Luis Figo to introduce three limited edition watches at this year’s Baselworld. The relationship between Luis Figo and the luxury brand’s founder Jacob Arabo dates back nearly twenty years. David Beckham, another famous Jacob & Co. customer, introduced the two when Figo was on a pre-season tour of the United States. It took Jacob Arabo and Figo less than two months to come up with limited edition watches after they met at the 2018 SIHH in January this year. Based on the watchmaker’s Epic X Chrono timepiece, the Luis Figo editions are mechanically identical to the standard watch. This made the personalization of the watches a relatively simple affair, with the 2000 Ballon d’Or winner adding his personal touches to the existing design. “We were able to create special elements for the special edition, like the special number 10 and the colors for the case and the straps, which have a personal significance for me,” Jacob Arabo said.

The limited edition collection will be offered in only 110 pieces in total: 50 in rose gold, 30 in black DLC titanium, and 30 in titanium. The Epic X Chrono Luis Figo watches feature the former Real Madrid star’s name engraved on the case back along with his applied signature, and his jersey number “10” in red on the dial. The case of the watch measures 47mm in diameter and is fitted with the exclusive Jacob & Co. JCAA05 skeletonized self-winding chronograph movement, which offers 48 hours of power reserve. All three versions of the watch come equipped with a black rubber wristband. The sporty Luis Figo Limited Edition Epic X Chrono also features in our top 9 watches for men from 2018 Baselworld. 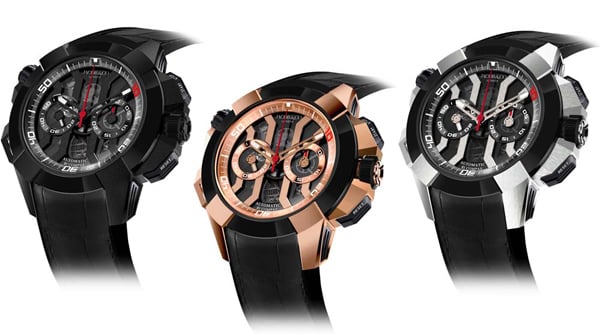