Antiquorum Auctioneers held an auction of “Important Modern & Vintage Timepieces” last weekend at the Mandarin Oriental Hotel in Geneva. Many exceptionally rare horological marvels were on sale at the auction including the exquisitely crafted Singing Bird Cage Clock by Jaquet Droz. The Small Singing Bird Cage Clock with Automaton Jumping Bird & Automaton Waterfall, attributed to Jaquet-Droz et Leschot Geneva, was unquestionably the highlight of the auction and it was sold to a Russian collector for CHF 291,750 ($305,000 approximately). The uber-rare clock was expected to bring in close to 400,000 Swiss Frances and become the top selling lot out of more than 1,000 lots which included exceptional pieces such as a Patek Philippe Ref 2499, a Blancpain 1735 Grand Complication and a Patek 5004. 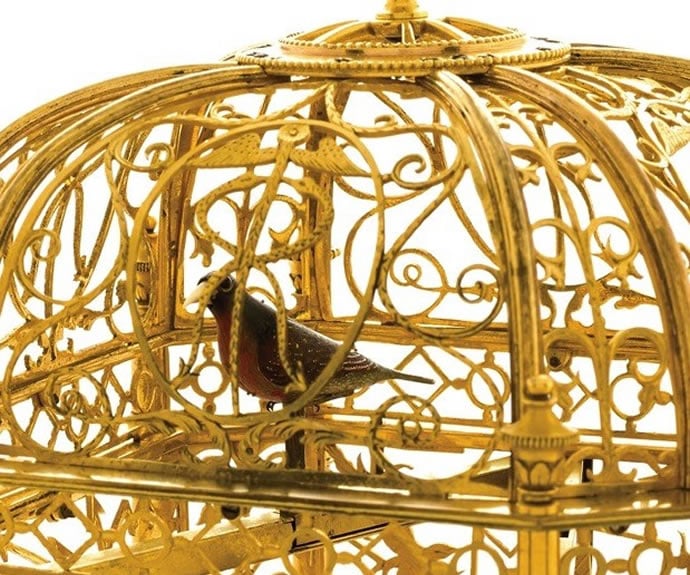 Made circa 1785, the fine and diminutive, gilded-brass, automaton singing bird clock features an early-type painted bird with a magical jumping effect, automated beak, wings, and tail, as well as an automaton waterfall that could be activated both at will and by the clock every three hours, metalwork attributable to Frères Billon, and movement by Henri Maillardet. The bird itself, beautifully constructed and with glass eyes and bone beak and delicately painted is one of very few known examples with a painted bird rather than the more usual feathered variety. The two-day “Important Modern & Vintage Timepieces” sale of nearly 1,000 modern and vintage timepieces brought a total of CHF 12.9 million, with 80% sold by lot and 131% by value, and was attended by collectors from China, Hong Kong, Russia, Switzerland, Italy, and the United States.

Tags from the story
Clock, Jaquet-Droz