Boxing fanatics, you cannot miss out on this one! Muhammad Ali’s famous ‘Rumble in the Jungle’ WBC belt has recently been sold for a whopping $6.18million to Indianapolis Colts owner Jim Irsay at auction. Yes, you read that right! The gold-colored metal belt features green leather strap and fetched 13 times its estimate at the auction held in Dallas, Texas. It was offered on sale by American businessman Troy Kinunen, who has collected 1,600 items relating to the boxer during his lifetime, as reported by The Sun. 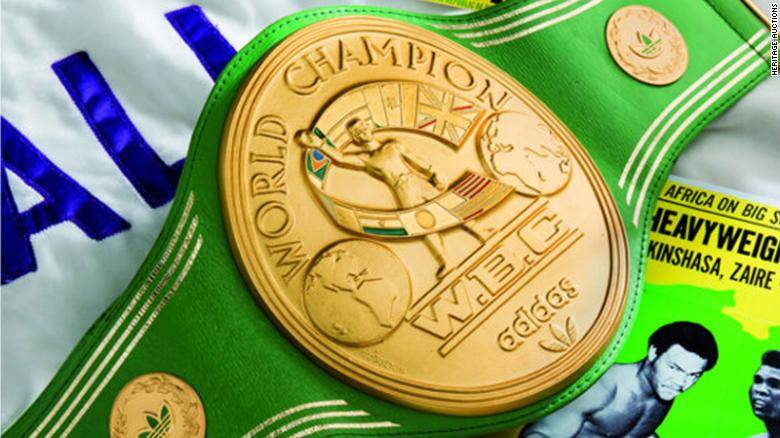 Ali had won the belt in 1974 after his victory over George Foreman in Kinshasa, Zaire, where he had employed his rope-a-dope tactic for the first time. Commenting on the item, a Heritage Auctions spokesperson said, ‘Ali drained the thunder from the Foreman storm and then unleashed lightning of his own, dropping Goliath for the count and, finally, seven years after his title had been unjustly stripped, completing his long journey back to the mountain top of the sport. The historical significance of the piece, arguably the most important boxing award ever made available at public auction, is quite simply immeasurable.’ Elated to have secured the winning bid, Indianapolis Colts owner Jim Irsay tweeted, “Proud to be the steward!” The historic belt will be displayed by the new owner on August 2 at Chicago’s Navy Pier and on September 9 in Indianapolis. Other items offered in the Heritage Auctions sale included the red robe worn by Ali before the ‘fight of the century with Joe Frazier and several other memorabilia belonging to the boxer.

Tags from the story
Muhammad_ali

Montblanc makes waves with a new iconic and immersive boutique in Champs-Elysées, Paris

This $30,000 superyacht cruise in the Hamptons will indulge you in vintage Dom Perignon’s paired…

Bill Gates does the dishes, whereas Jeff Bezos bakes cookies – Meet the Billionaires who…

From J.Lo. to Simone Biles, these are the most expensive celebrity engagement rings of 2022.