Moonwatch collectors around the world have cause for celebration as OMEGA marks the 50th Anniversary of its legendary Speedmaster Chronograph with a Limited Series release of the Speedmaster Moonwatch. No other watch has played such a crucial role in man’s quest to conquer space as the Speedmaster: the first and still the only watch to have been worn on the Moon. To commemorate this milestone, OMEGA pays tribute to the year 1957 when the Speedmaster was first launched and will limit production to 57 pieces of each of the three gold versions of the Moonwatch and to 1957 pieces of the stainless steel model, making this an exclusive and coveted collector’s item (these series are otherwise sold out). The watches are being sold during a charity auction in Berlin on July 11th. The auction, simultaneously held on-line, will be conducted on the occasion of the Omega exhibition marking 159 years of experience and savoir-faire in watchmaking on the occasion of the 100th Anniversary of KaDeWe, a Berlin department store. All proceeds will go to causes benefiting children. 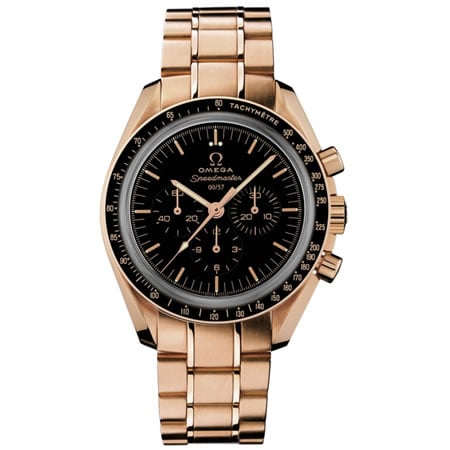 To mark the occasion, the commemorative Moonwatch will be presented in a special handmade wooden presentation box with a beautiful marquetry rendition of the seahorse logo on the lid. The four feet of the box have been engraved with eight dates. Each date commemorates a moment in man’s relentless quest to conquer new horizons and Speedmaster’s invaluable role during these exploits. The Limited Series Speedmaster Moonwatch Chronograph offers collectors a rare opportunity to own a piece of space and horological history.
Source