Peter Michael Davidson, the 28-year-old current flame of Kim Kardashian, is known for many things. He is a well-known comedian, writer, producer, and actor, but in less than 28 years of his life, he has experienced more than what most people do in a lifetime. Woes, wealth, woman, and outstanding talent have been omnipresent in his life. While he had an unfair share of troubles growing up, he took it in his stride. Charlie Chaplin’s quote, ‘To truly laugh, you must be able to take your pain, and play with it!’ and boy! Did he play well or what. From losing his dad when he was barely seven to battling addiction and a chronic illness, there are plenty of things that are not public about the man who makes it look easy! Let’s learn more about Pete Davidson’s life and everything it revolves around:

Growing up
The proud Staten Islander, Pete, was born on November 16, 1993, in the New York City borough, to Amy née Waters and Scott Matthew Davidson, a New York City firefighter. He has a younger sister named Casey. Even though Davidson’s father was predominantly of Jewish ancestry and his mother of Irish origin, Pete and Casey were raised Catholic. Pete attended St. Joseph by-the-Sea High School, followed by Tottenville High School, before transferring to Brooklyn’s Xaverian High School, where he graduated in 2011. After high school, he enrolled at St. Francis College in Brooklyn Heights. Only a semester into college, Davidson decided to pursue a career in comedy full-time.

Pete was always close to his mother, who worked as a school nurse at Xaverian High School in Brooklyn after tragically losing his dad. He was bullied in school and had no friends, leaving only his mother as a confidante. In an interview, he revealed to Peter Rosenberg that he had just one friend he could trust in high school, and many other kids were not nice to him. He said, “I was in school having a rough time grieving, so I was acting out a little bit. I didn’t have any friends.” In the same interview, he also admitted that he lived in his mother’s basement in Staten Island for years even after making it big as a comedian and could afford his place.


Health is wealth
As much as comedy and writing are a part of Pete’s life, his health, too, has been on the forefront as an intensely demanding element. Going down memory lane, the first blow came to his mental health after losing his father. Pete Davidson found it tough to confront his demons and deal with everything he was going through. Even before he turned ten, he struggled with mental health issues that began as early as nine. I’ve been in and out of mental health facilities since I was 9.”

In Variety’s annual Power of Young Hollywood issue, Pete shared, “I tried to drown myself in the pool when I was in the fourth or fifth grade. I was trying to get my head stuck in the ladder in the deep end, so I would not be able to get up.” Davisson lost his father, a Staten Island firefighter when he was seven years old during the 9/11 attacks. Learning about death so early in life can’t be easy on anyone, and it certainly took a toll on Pete. “If my dad didn’t die, I wouldn’t be a comic. I’d be a construction worker in Staten Island or a basketball coach. I learned what death was. And you’re not really supposed to learn about that until high school, when one of your friends falls asleep in the garage, or whatever,” he said. 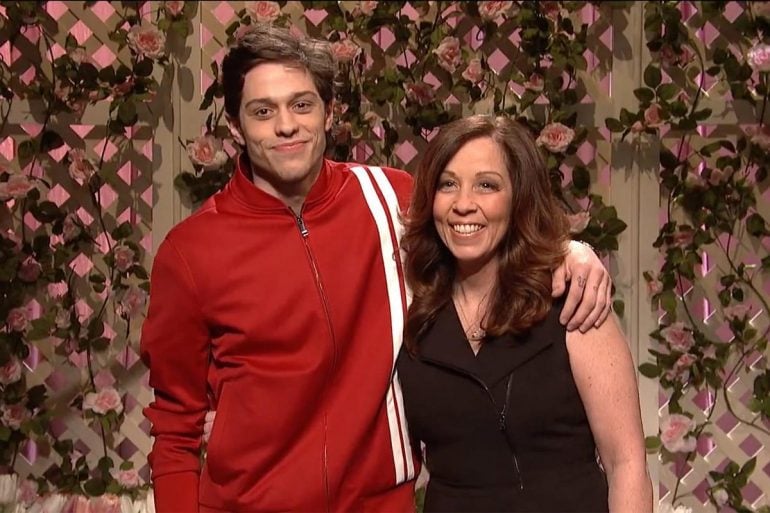 Grunge shared his mother’s account of Pete’s difficult childhood. Amy said, “It was sad how sad he was growing up.” So deep was his sadness that he ended up pulling out all his hair in frustration. After the emotional debacle faced by his family, Pete was constantly in touch with physicians trying to understand children’s experiences of victims of the terror attacks. On remembering these days, Davidson admitted to thinking of himself in many ways as a “lab rat” for physicians. By the time Pete Davidson turned 17, he was diagnosed with Crohn’s disease and established himself as a comedian. The condition took a toll and drew him to marijuana. Pete said, “My stomach would just be in pain all day, and I wouldn’t be able to eat, and then I’d smoke, I’d be able to eat and be able to do my shows.”


Battling addiction
An emotionally taxing life topped with physical illnesses led Pete Davidson to the comforting arms of marijuana. He sometimes relied on medical marijuana for pain management but was soon addicted to it. Over time, he realized the damaging impact marijuana had on his life and checked himself into rehab. Davidson honestly spoke about his journey, not one to shield the realities of life, whether in his comedy style or personal life. In 2017, he publicly said about seeking help to beat addiction and being sober for the first time in eight years. If Crohn’s disease made life an ordeal, he was also diagnosed with a borderline personality disorder. He opened up about his condition in an interview with Glenn Close for Variety’s “Actors on Actors” series, “I got diagnosed with BPD [borderline personality disorder] a few years ago, and I was always just so confused all the time, and just thought something was wrong and didn’t know how to deal with it. Then, when somebody finally tells you, the weight of the world feels lifted off your shoulders. You feel so much better.” Unfortunately, Pete’s younger sister Casey struggled with substance abuse and bipolar disorder.


Comedy for all reasons and seasons
It wouldn’t be wrong to say the teenage boy dealing with depression, disappointment, and dejection at every stage of his formative years found refuge in making people laugh. Comedy saved him in more ways than one. It gave him a path to tread on, took him away from the ordeals of his life, and also made him a success. At 20 years of age, Pete got his first taste of the limelight when he made an appearance in the third episode of the MTV comedy series Failosophy, which premiered on February 28, 2013. This was then succeeded by stints on MTVs Guy Code and Nick Cannon Presents Wild ‘N Out.
Davidson subsequently made standup appearances on television, first in Comedy Central’s Gotham Comedy Live and then in the American police procedural comedy Brooklyn Nine-Nine. Things indeed turned around for Pete when he joined the cast of Saturday Night Live (SNL), becoming the youngest cast member ever. In 2015, he made an impact as a roaster on the Comedy Central Roast of Justin Bieber; his set was touted as one of the best of the show. Adulation and accolades also brought in enough moolah for, by 2016, Davidson was on the Forbes 30 under 30 list. Pete Davidson clicked with audiences owing to his comedy style, which was no holds barred style for topics. He openly based his comedy on his life and touched upon issues such as marijuana, sex, and relationships.
He is worth millions –
Pete Davison created a niche for himself with more than 100 episodes on SNL and a lot of money! According to a cast member of “SNL, reported by Yahoo Finance,” Davidson earns between $15,000 and $25,000 per episode he appears on, so he can earn around $500,000 per year. Pete has performed in several films, including Set It Up, Big Time Adolescence, The King of Staten Island, and The Suicide Squad, which undoubtedly added to his bank balance. In 2020, Netflix unveiled his standup special “Alive from New York.” He made a mark by starring and writing “The King of Staten Island,” a semi-autobiographical film directed by Judd Apatow.
According to Celebrity Net Worth, Pete Davidsons’ net worth is about $8 million. Among the nice things in his life (other than fabulous women) is a Mercedes S-Class because of his grandfather’s years-long dream. Davidson told Motor Biscuit, “Since I was five years old, my grandpa always told me he wanted to drive an S Class.” Pete also owns a Mercedes G Wagon as he catapulted to fame and made famous friends with fancy wheels. After living in his mother’s basement for more than two decades, Pete Davidson finally invested in a luxurious high-rise apartment worth $1.2 million. He shared news of this delayed but necessary improvement in his life in a Zoom call uploaded to TikTok, where he showed off his new keys. “I just moved out of my mom’s house,” he said as he unlocked the door of his new apartment. “I’m fully out. I got a pad.” FYI, the $1.3 million Staten Island home he lived in with his mother was also purchased by the comedian/actor/writer for her in 2016.
The long list of romances –
Tragedy, comedy, and romance come in equal measures in Pete Davidson’s life. His formative years may have been laden with sadness and health issues, but life in his twenties was pretty colorful. If the way to a man’s heart is through the stomach, then the way to a woman’s heart is through humor, and Pete is pretty hilarious. His sense of humor and charm has resulted in a long list of romantic links to a wide-ranging list of Hollywood ladies. The SNL comedian has dated the likes of Carly Aquilio, Cazzie David, Kate Beckinsale, Margaret Qualley, Kaia Gerber, Bridgerton-actress Phoebe Dynevor (in that order).


The most shocking romantic move was dating Ariana Grande after Cazzie David. His relationship with Grande is the definition of a whirlwind romance, as he proposed only a few weeks into the relationship. The proposal involved a $100,000 worth 3.03-carat diamond ring. Sadly, the relationship fizzled out at rapid speed, too, with the couple calling off their engagement after just five months together.

Antoni being highly uncomfortable by Pete Davidson and Kate Beckinsale is a legitimate mood pic.twitter.com/J55Xb8Jkcl


He spent another four months of his life from January to 2019 of in the arms of the ravishing Kate Beckinsale. The couple, 20 years apart in age, met at the Golden Globes after-party. An insider told Page Six, “Even though Kate has been in Hollywood for a long time, she struggled with the attention on her relationship with Pete.” His latest flame is none other than billionairess Kim Kardashian, and that deserved a special mention!


Keeping up with Kim Kardashian –
Life is a bed of roses for Kim, 41, and Pete Davidson, 28, and the loved-up duo are constantly wearing their hearts on their sleeves, or should I say on their Skims? The couple is painting the town red, from walking around Palm Springs hand-in-hand to flaunting a hickey and enjoying a romantic date at Giorgio Baldi in Santa Monica. Even their families joined the party as Pete celebrated his 28th birthday at momager Kris Jenner’s $12m mansion sporting Skims with his Kim. It is the first romantic partner for the SKIMS mogul since she filed for divorce from estranged husband Kanye West, but she looks delighted in Pete’s company.


An insider exclusively told Hollywood Life, “Kim has not stopped talking to her sisters about Pete since SNL. This isn’t like Kim because Kim gets bored so easily, and right now, she is still giddy about the guy. She knows about his reputation and about his past but she doesn’t care. She has a past too and if anyone can get a man to become attached to one woman it’s Kim.” The insider continued, “They text all day every day, and she shares these texts with her sisters. She is very much into him, and this is not a fling it seems.” What about Kanye West? While most of the Kardashian- Jenner clan was worried about Ye having a ‘meltdown,’ Kim couldn’t care less.