Designer hotels are a dime a dozen these days, so how do you distinguish the authentically designer hotels? It’s easy for you simply look for a luxury hotel that a designer has actually designed. The trend of designers lending their expertise to hotels is becoming a popular one, and as a customer, I’m not complaining. Traditional hoteliers cannot match the attention to detail that a designer offers. Below is a list of some of the top designer luxury hotels in the world. 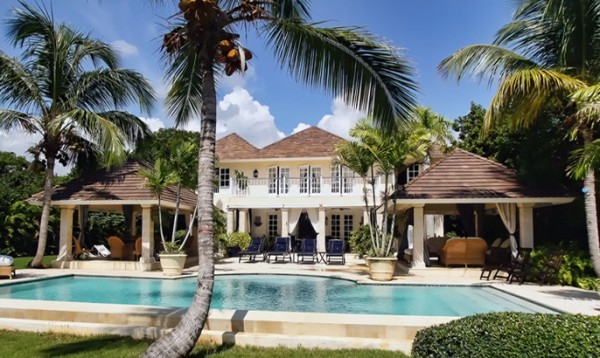 Puntacana is a rare oasis in a world full of commercialization, this jewel of a resort is located in the Dominican Republic. Reclusive celebrities like Julio Iglesias, Bunny Williams, and Dominican Native Oscar De La Renta call this hideaway home. World-famous architect Tome Fazio designed the golf course here. Calling this property a hotel is inaccurate; it offers instead 126 homesites with views of either the masterpiece golf course or the beautiful azure Caribbean Sea. With an airport, the Puntacana resort is one of the most accessible Dominican Republic destinations. The AAA five-diamond awarded Tortuga Bay, Puntacana resort offers 30 suites and 13 villas all designed by Oscar De La Renta, offering an inordinate amount of luxury and impeccable service. Using his Dominican heritage, De La Renta has managed to convert stay true to the aesthetic of this Caribbean Island while at the same time affording you the highest form of luxury. Rates for the Dominican Republic jewel is available on request. 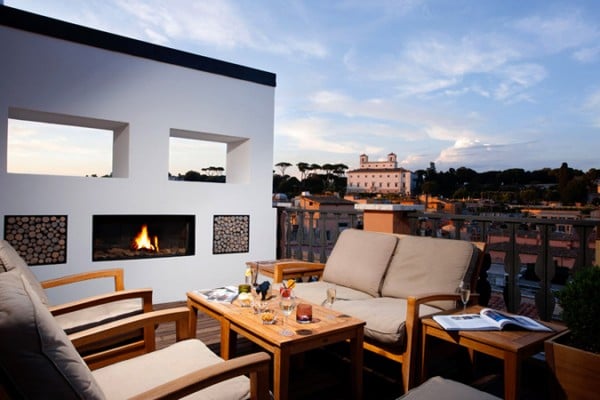 Ferragamo is one of my favorite designers; his design aesthetic is to use new concepts and blend them with the rich history that has come before. When applied to a hotel, this concept translates beautifully. The jewel of the Lugarno Collection, the Portrait Suites Hotel offers 14 exclusive suites located in the townhouse above the Ferragamo store on the Via Condotti in Rome. Located close to the Spanish Steps, the suites have been designed to represent the splendor and luxury of Rome in the ’50s, of course, combined with completely modern amenities. Suites on the top floor afford a beautiful view from the terrace of the Trinità dei Monti. The Salvatore Ferragamo Experience lets you truly experience the meaning of the saying, “when in Rome, do as the Romans do.” Guests also get an exclusive Ferragamo shopping experience and a 10% discount on all purchases at the designer’s boutiques in Rome. The suites start from $1,100 per night. 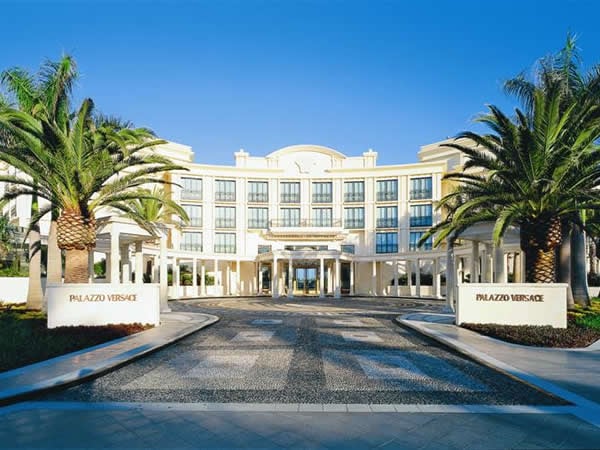 The Versace Palazzo Dubai, is possibly one of the most anticipated upcoming hotels. It will have a limited edition of exclusive condominiums available for purchase, ranging from 1 to 6 storeys and even some duplex residences. The project is being developed by Emirates PV Dubai and will allow clients a complete Versace experience. The Palazzo Versace in Australia has the unique distinction of being the world’s first fashion branded hotel. It opened for guests in September 2000 and has gone from strength to strength since. Versace has brought the grand luxury that was previously confined only to Europe to the land down under. The hotel is located in Australia’s most famous areas, Gold Coast; Gold Coast has something for everyone; you can explore the ‘new worlds,’ Dreamworld, Sea World, WB Movies World, and Wet n Wild Water World. Guests can shop at the exclusive Versace boutique located at the hotel or at the nearby Marina Mirage. Palazzo Versace consists of 200 rooms and suites, all with Bespoke Versace furnishings, floor to ceiling windows. To add to the romance, there is a couple-sized spa bath as well—prices for this exclusive Gold Coast hotel range from $530 to $2,200. 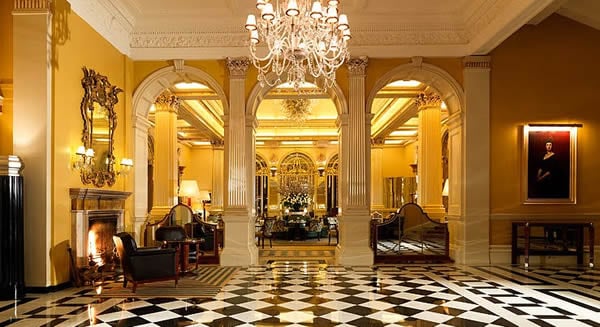 Claridges in London is easily one of the most historic hotels in the world; since its beginnings in 1800, it has been a favorite destination for the royals, politicians, and celebrities. In the historic year of 1945, Winston Churchill declared one of the rooms in the hotel Yugoslavian territory so that the crown prince could be born on his own country’s soil. When Dian Von Furstenberg first collaborated with Claridges in the 1970’s she would be adding to a long legacy. Claridges boasts having had the first designer suites in London; judging by the Furstenberg-designed Piano suite, they have every right to boast. Each suite offers space, style, and glamour; the suites do not give off the jaded vibe that so many suites do, instead offering a very individual atmosphere. Each suite has its own exclusive amenities, a personal butler that delivers an unmistakably English Service. Your every need will be met at this London Hotel, with rooms ranging from $520 to $2,390 per night. 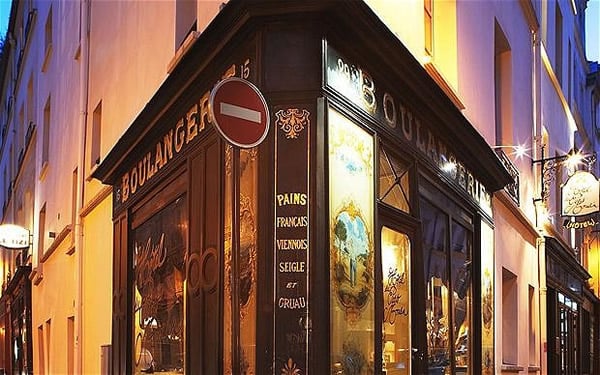 Christian Lacroix is one of the prominent names in the Paris fashion world; he has previously lent his design aesthetic to the Lebellechasse hotel in Saint Germain. Each of the 33 air-conditioned hotel rooms was designed by Lacroix and featured a full bathroom with a shower and bathtub. Not to mention that the rooms also happen to be soundproof. Lacroix has most recently dedicated himself to a project that can only be described as quintessentially Parisian. A 17th-century building, the site of an ancient bakery, has been renovated to create this incredible boutique Hotel Du Petit Moulin. The facade and shop sign, which date back to the 1900s, have been kept intact to hark back to the history of this ancient bakery. When asked why he chose this project, Lacroix said, “I immediately fell for the slightly twisted perspectives, the maze-like passageways on the different floors and the new functional areas which have been added in full respect of the “old Paris” style of the classified parts of the building.” Located in the heart of Paris, close to the Picasso Museum, the Carnavalet Museum, the Place des the Vosges, and the Hotel de Ville. This hotel will afford you the quirky Parisian experience you dreamed of, with rooms ranging from $260 to $520. 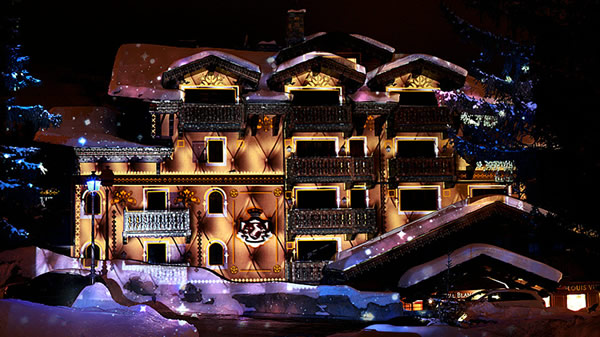 LVMH famous hotel The White 1921, in St.Tropez is all set to reopen it’s doors on 17th May 2013. Named for 1921, which was a fantastic year for champagne, the hotel houses 8 enormous rooms. One of the most opulent hotels in LVMH’s portfolio is Cheval Blanc, located in the exclusive ski resort of Courchevel 1850; LVMH C.E.O Bernard Arnault owns the hotel. The tone of the hotel is set as soon as you see the enormous glass stallion displayed outside. 34 rooms and suites are divided over 5 floors, each featuring either a terrace or a balcony. Each room has a separate dressing room, independent toilet, and a large bathroom with a bathtub and a separate hammam shower.
Equipped with luminotherapy. The White, The1947, The Table de Partage, and The White Bar offer ample restaurant and bar options. Guest can choose to relax at the Givenchy Snow Spa or choose another form of therapy with the Christian Dior and Louis Vuitton boutiques. Located in Courchevel, France, rates are available on request. 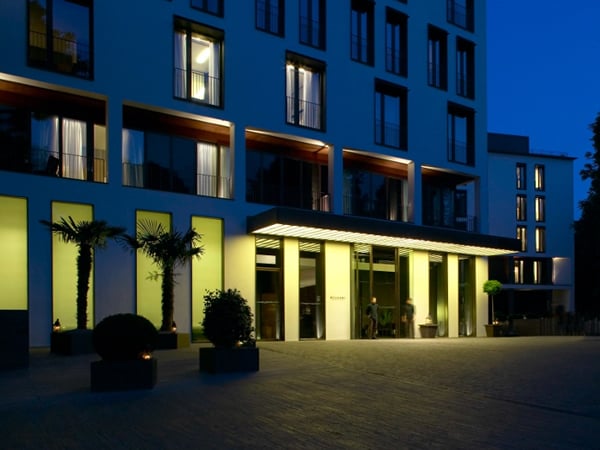 The Bulgari Hotel in Milan is located between Via Montenapoleone, Via della Spiga, La Scala, and the Accademia di Brera, inside a tastefully renovated 18th-century Milanese palazzo. Many of the world’s greatest designers call Milan home, and as such, it can sometimes give off an austere, almost strict appearance. However, both literal and figurative facades are an ample amount of courtyards and green spaces underneath its many. The Bulgari hotel happens to house one such open space, a 4,000 sqm private garden that is a natural extension of the famous Botanical gardens located nearby. The hotel features 58 rooms, including 11 suites; each room has ample windows, which give them a naturally luminous glow. Bulgari, famous for its attention to detail and use of precious materials, has applied the same principles to the rooms by using teak and oak to give off a feeling of intimacy in each room. Bulgari has also lent its expertise in design to hotels in London, Shanghai, and Bali; each hotel reflects the natural beauty and environment of its location. Room prices at the Milan hotel range from $ 700 for a standard room or to $4,500 for a superior suite. 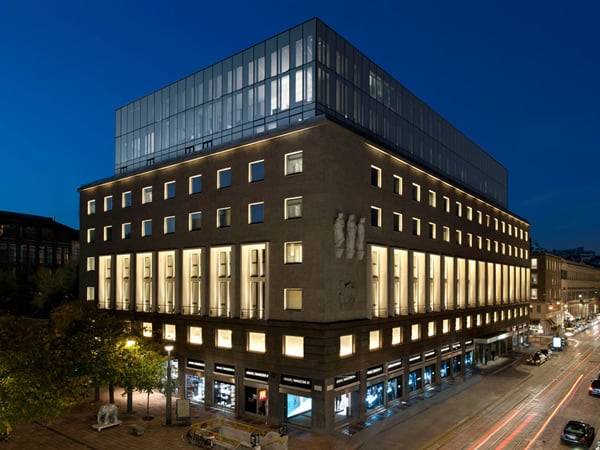 Armani is a brand name synonymous with high fashion under its many brands ranging from Emporio Armani to Giorgio Armani. Giorgio Armani is one of the best designers to ever come out of the world’s fashion capital, Italy. Starting with Armani Casa, Giorgio Armani started to branch out into the world of Interiors; from there, designing hotels was a natural progression. The two luxury designer hotels in the Brand’s portfolio currently are the Armani hotel in Milan and Dubai. The Armani Hotel Milano features 95 hotel rooms, including 31 suites ranging from Armani Executive suites to Armani Presidential Suites. The Dining experience is an ethereal one with floor-to-ceiling glass windows giving you a panoramic view of the rooftops of Milan. Located on the top floor, the Spa is a 1000sqm of pure tranquility, as it has been designed to relax you as you look out onto the bustling city of Milan. In Dubai, the Armani Hotel has 160 rooms, including several suites; each room has been designed with Armani’s signature understated elegance. The dining experience at the Armani Hotel Dubai has been designed exclusively by Giorgio Armani to reflect his personal taste level. What’s quite fantastic about a stay at this Dubai hotel is the exclusive retail experience you get; explore the world of Armani with three boutiques, namely Armani Dolci, Armani Fiori, and Armani Galleria. Both the hotels in Milan and Dubai represent Giorgio Armani’s personal style aesthetic. The Armani Ambassador suites at this exclusive Milan hotel will set you back $2,700. 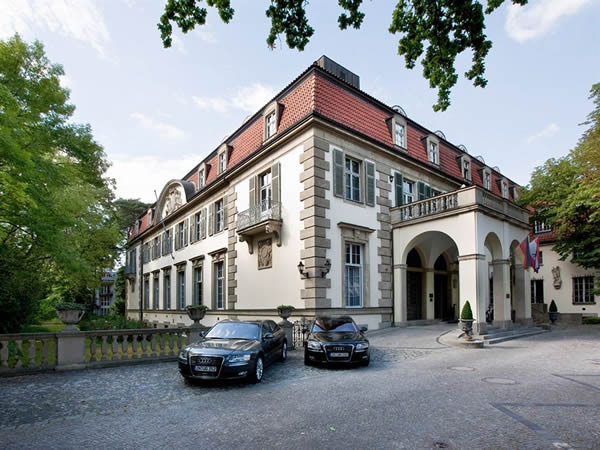 Nobody is more famous or infamous for that matter as a designer than Karl Lagerfeld; the visionary designer transforms any item he puts his mind to. So why would hotels be any different? In March 2012 Lagerfeld was invited to redesign the outside premises of the Hotel Metropole in Monte Carlo. This included the pool, terrace, gardens, and the third and newest Joel Robuchon restaurant. Opened in the summer of 2012, the hotel will feature a fresco-style installation representing Ulysses’ famous journey, chronicled by Homer. Another stunning example of Lagerfeld’s prowess as a designer is the Schlosshotel I’m Grunewald, an authentic designer hotel in Berlin. The hotel has its roots in history, built in the early 20th century and then redesigned in the ’90s by Lagerfeld. He used his expert eye to combine the grandeur of the turn of the century with uniquely contemporary features. The pinnacle of this hotel has to be the Lagerfeld-designed Grunewald suite, which includes a living room, hall, a large bedroom, and a romantic bathroom made using French handmade tiles and white marble floors. The entire suite spans 106 sq. – 1141 sq. and contains extravagant furniture reminiscent of the romantic Art Deco era. Located in Berlin, The Grunewald suite costs a cool $2,650 a night.

Tags from the story
Hotels