Here is a man in flip-flops, traveling first class to New York, and that’s not the part I am trying to stress on, he is my topic for this write-up not because of his flip-flops, t-shirt, or grimy jeans but because he had a dime in his pocket. Now that unfinished sentence makes me come across as a dim-witted person which I most certainly am not. The dime is worth $1.9 million. The person who sold the dime is Oakland businessman Daniel Rosenthal, he sold it for obvious reasons and the person who bought the dime does not want the world to know who he is for reasons best known to him. I would rather write about John Feigenbaum, the flip-flops guy who flew it out of the country. He couldn’t eat or sleep during the entire trip and his experience is interesting, amusing, and interesting all at the same time! Feigenbaum is a rare coin dealer, and the dime he was carrying across the country, from San Jose to New York, is an 1894-S dime, one of only nine known to exist, and one of only 24 known to be coined that year in San Francisco. 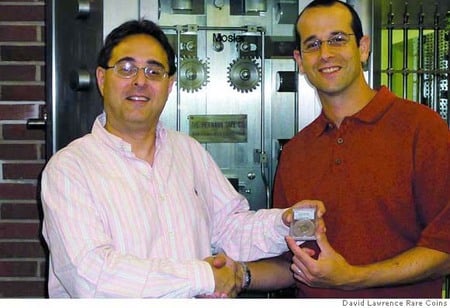