The last (but certainly not the best) Star Wars movie was released in 2005 and since then rumors and high expectations were ripe about when we’d get to see what happens next with the world’s favorite Sci-fi saga. Almost a decade later and finally fans can breathe a sigh of relief as the date for the next addition to the epic story is just around the corner; Star Wars: The Force Awakens has all the earmarks of being bigger and better than even the original trilogy according to the initial reports. What has fans in high spirits is the fact that along with new characters, we’re going to be seeing old favorites as well. In light of the movie’s December release, Star Wars memorabilia as well as special edition items have been making the rounds as collectors and fans gear up for the next big space adventure.

Seeing as we’re just as excited, we’ve assembled a list of exclusive and rather heavily priced items that include Star Wars memorabilia, props and hard-to-come-by accessories. Take a look and if you have more options in mind, feel free to list them in our comments. 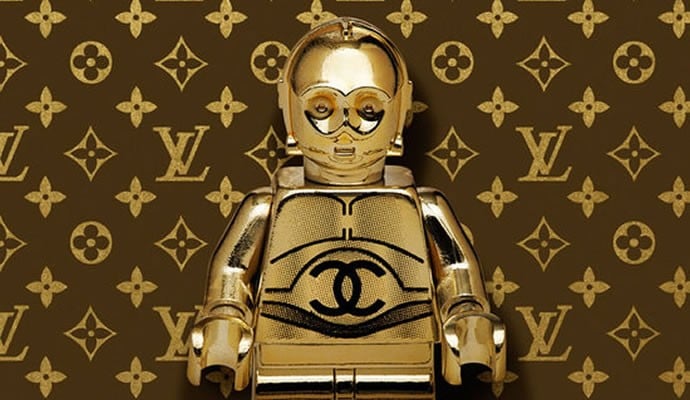 Louis Vuitton and Coco Chanel Themed Lego Star Wars Artwork – $2,200 to $4,200
For those of you who happen to have a penchant for major fashion brands like Louis Vuitton and Chanel and also happen to be Star Wars aficionados as well as art collectors, then perhaps the work of photographer Dale May will be just want you need. Taking geek and fashionistas by storm, May’s work uses LEGO’s Star Wars characters and re-brands them while including background artistic motifs and brand logos to achieve some very chic effects. One piece features that famous bucket of bolts and rather talkative etiquette Droid, C3PO, who’s been slightly modified to carry the Chanel branding. “V3PO” in his gold glory is positioned in front of a design featuring the renowned Louis Vuitton monogram and representing the dark side is Vader who now seems to be wearing a Louis Vuitton belt and is placed in front of a Chanel logo. Two sizes of each print (24″ x 24″ and 42″ x 42″) will be made available and are presented in silver c-print face mounted to an archival acrylic, backed with aluminum. These seem like the perfect art styling’s for the fashionable geek. 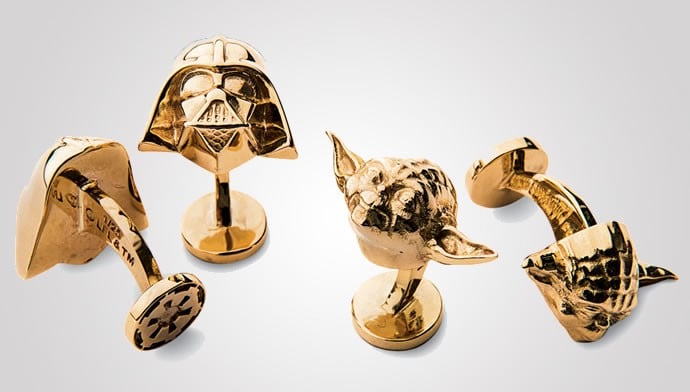 Neiman Marcus 14 Karat Gold Darth Vader Cuff Links – $4500 (need the link as these are available for sale)
Perhaps this is not the most prestigious item on the list but it’s surely something an aristocratic Star Wars fan would choose to have as an essential clothing accessory. Neiman Marcus prides itself on chic, new age, high-fashion designs and who would pass up an opportunity to design something in a Star Wars motif; so enter the limited edition 14CT yellow gold Darth Vader cuff links. If the Dark Side is not your cup of tea, you could always switch over to the rebel alliance and go with Yoda styled options that are also available in the same form. Each of these exclusive cufflinks feature a round back with either a Galactic Empire or Rebel Alliance symbol imprinted, clearly demarcating just which side of the Force you stand on.

Devon Star Wars Watch – $28,500
An absolutely stunning piece of craftsmanship, the Star Wars watch modeled after the quintessential sci-fi villain, Darth Vader, and his infamous flying machine the TIE Fighter, Devon has captured the very essence of the series with poise, innovation and created an horological wonder. It’s a brilliant homage to the iconic ‘bad-guy’ and doesn’t get more suave than this. Using quality materials like Diamond-Like Carbon steel and other aerospace grade components – glass-enforced nylon belts, hybrid electro-mechanical power, optical recognition cells and electrical contacts – the limited edition Star Wars watch by Devon watch looks like it’s worth every penny of its $28,500 price tag; it even ships with a stand that’s designed like a TIE Fighter and the company also throws in a couple Star Wars styled cuff links as a bonus! 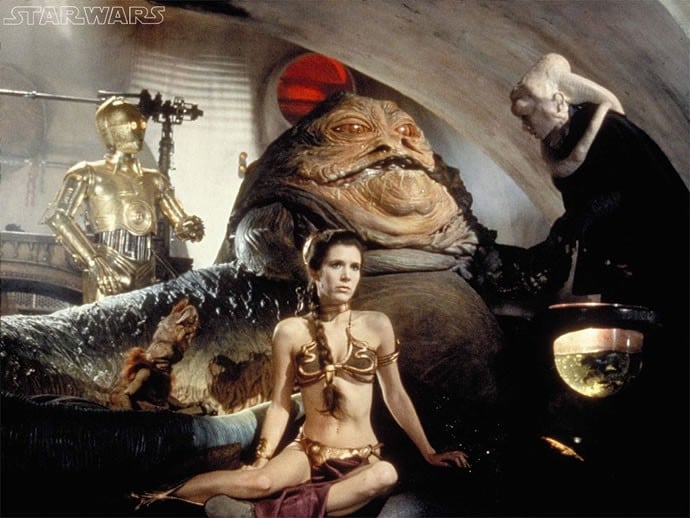 Princess Leia’s Gold Bikini – $96,000
Worn by the stunning Carrie Fisher in Star Wars: Episode VI – Return of the Jedi, this is probably the single most appealing article of clothing that was ever designed for the sci-fi genre, period! Made from flexible, gold-painted red dense-urethane rubber, the actress reportedly found it extremely awkward and uncomfortable to wear while shooting, but the show did go on and the iconic Leia “slave” metal bikini stands second to none when it comes to sex-appeal in all of geekdom and hence, fetched such a high price while on the block.

1 2→
Tags from the story
Star-Wars