Protests are common in the modern world where each group or community tries to make their satisfaction or dissatisfaction known publicly via a rally/march. But not always do these protests remain peaceful, and it takes hardly a minute to turn a peaceful demonstration into an infuriating mob. To combat such situations, the federal forces in every country resort to different techniques. The Germans will use “the WaWe 10” to “water-down” violent riots breaking out at demonstrations and large events. The WaWe 10 or the “Water Cannon 10000” is a mean machine that will be soon used by the federal and local police forces in Germany. In a league of its own, the WaWe 10 is worth over 1 million euros ($1.45million). Under this vehicle’s sturdy armor lie a Mercedes-Benz Actros 3341 featuring all-wheel drive and an eco-friendly Euro5 V6 turbo diesel engine producing 408HP.

This large vehicle will accommodate a crew of five, comprising driver, commander, observer, and two cannon operators. In the center of this riot-fighting truck, the aluminum body is located a huge 10,000-litre water tank. At the same time, a Rosenbauer N 35 centrifugal pump with a rated output of 3,500 liters per minute at 10 bar is situated in the vehicle’s rear.
A separate diesel engine drives the three pumps, two on the front corners of the cab, each with a flow rate of 1200 lt/min, and one on the rear of the vehicle with a flow rate of 900 lt/min, i.e., they are operated totally independently from the vehicle.
A truck right out of a sci-fi flick features floor spray nozzles beneath the vehicle, designed to protect the chassis against fire, while the cab and body roofs are fitted with an automatic protection system. The WaWe 10 is almost 10 meters-long (about 32-feet) and 3.70 meters-high (12-feet) and has a technically permissible gross vehicle weight of 33 tonnes.
The official handover of the keys to this vehicle was done on 18th December at the federal police headquarters in Sankt Augustin. Furthermore, it is believed that the German government plans to buy 78 identical WaWe 10’s and bring them into service by 2019. After the assessment of the first prototype model, Mercedes Benz has said the first three series-produced vehicles have been scheduled for delivery in 2010. 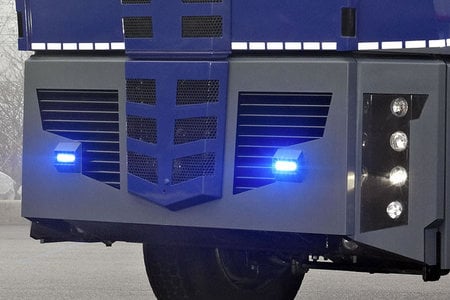 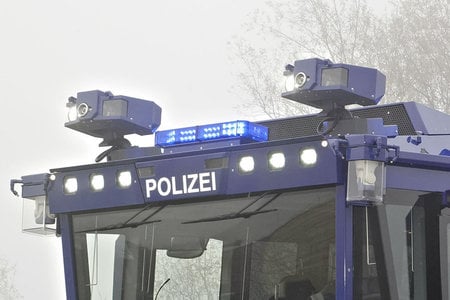 Tags from the story
Germany, Mercedes-Benz