It has been five years since BMW put its X5 and X6 through their M division to give the two massive sized SUV a sporty overhaul. Now, the second-generation BMW X5 M and X6 M have officially arrived to thrill the BMW fans who prefer the crossover platform rather than the sleek and incredibly fast M sedans/coupes. The two new models retain their 4.4-liter, twin-turbocharged V8s, but the power has been uprated from 555 horsepower to 567 ponies. The jump in power might not be much but the torque has been increased more significantly, climbing from 500 pound-feet to 553 pound-feet. Power is delivered to all four wheels through an eight-speed auto gearbox, and 100 percent of the power can be shifted between the front and rear axles through a multi-plate clutch with torque vectoring. With launch control on, both SUVs can go from 0-60 in 4 seconds flat, with a top speed of 155 MPH. 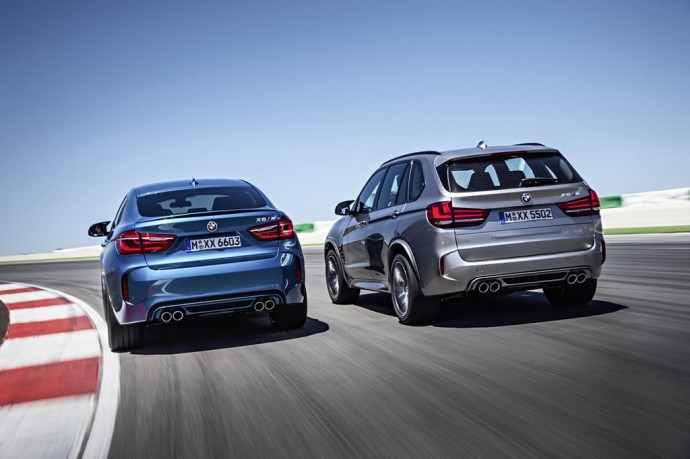 Set to make their public debut at the upcoming Los Angeles motor show, both the cars have been given substantial upgrades. Carbon dioxide emissions and fuel consumption are down 20 percent on the European cycle. The suspension uses a combination of stiffer springs and reworked wishbones, with a 10mm drop compared to the standard variants, along with a self-leveling air suspension. Distinguishing the new X5/X6 M models from less powerful versions of the third-generation X5 and second-generation X6 is a new front bumper with large air intakes for added engine bay and front brake cooling, painted wheel arch flares, revised front fenders with a stylized air duct to extract air from the front wheel houses, signature M exterior mirrors, chunkier sills underneath the doors and a deeper rear bumper with housing four chromed tailpipes. Buyers will also get a choice between standard 20-inch wheels with 285/40 and substantial 325/35 tires or optional 21-inch rims.