Watching this high-resolution, big-budget video, you might very well mistake it for a new ‘Fast and Furious 7’ trailer, but believe it or not, it’s the handiwork of Dubai’s own police department. There’s no point in having a Bugatti Veyron, Aston Martin One-77 and a Lamborghini Aventador in the fleet if you can’t show them off, and we understand it quite well. The 88-second 4K video, posted on the Dubai Police’s YouTube channel, exotic car including Ferrari FF, Mercedes SLS-AMG, Bugatti Veyron, Mercedes G63 AMG, McLaren MP4-12C and few more in police livery race down the streets of Dubai at night with their patrol lights blaring.

The cars maneuver among one another on Mohammed bin Zayed Boulevard, passing through tunnels, before coming to a halt in front of the Dubai Mall and Dubai Fountain crowded by tourists, locals, and happy kids getting a chance to see the cars up close and pose with them. It might be an ostentatious display by the authority, but as a public relations tool, it’s also an extremely effective way to build goodwill towards the police force. Considering all of the attention these cars get from all over the world, they have been successful in promoting the police department as well as the city. Have a look at the mind-blowing video and tell us what you think about it. 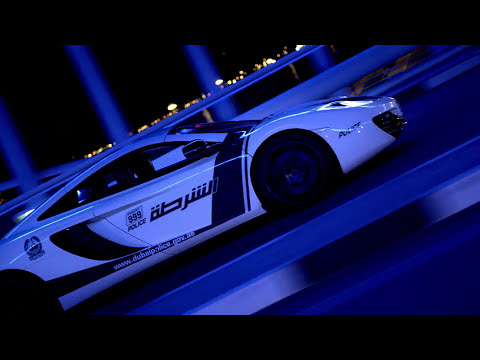