Unlike speed boats and yachts, jet skis are designed with the single purpose of being as much fun as possible for its riders. They are utilitarian waters crafts meant to put a big smile of faces of adrenaline junkies but Strand Craft has created a powerful, yet luxurious jet ski that will also turn heads while riding the waves. Named the V8 Wet Rod (as in hot rod for the open waters), it is crafted to look like a miniature yacht and aesthetics similar to a Rolls Royce, and the jet ski unlike any other features a massive 5.7-liter V8 engine that cranks out 300 horsepower. 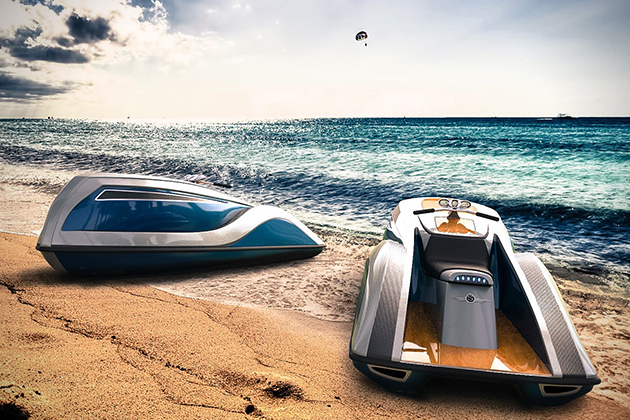 As on now the Wet Rod is still under development but as per its makers, the personal water craft is capable of attaining a top speed of 65 mph (105 km/h) thanks to the big V8. The slick and shinny body measures 16-foot (4.9-m) and is crafted out of carbon fiber and epoxy. It also has an ice box under the seat to store drinks and a separate waterproof luggage box for storing bigger items. Optional extras include wood or carbon fiber inlays, custom paint, a custom trailer, a sound system, a chrome engine dress-up kit, and GPS navigation. The company plans to commercially launch the Wet Rod by the end of this year with the prices starting at US$49,000.

Tags from the story
Water-Vehicles