You may not have heard of the Park Brothers Choppers, but the Tron Light Cycle could be something that brings light to what we are talking about, right? After the success of the bike in the movie and the Green Machine movie, it’s now time for them to race even further into the future of chopper designing. Simon’s Detonator concept has been developed. A 30-inch front wheel and dual 96-volt electric motors in the hub of the 27 inch rear wheel monster will get powered by lithium-ion batteries. That means one hour, and the chopper is fully charged and ready to take you to a top speed of 120 mph!

What’s the price to own such a futuristic piece of machinery? In the US, Europe and Saudi Arabia it will sell for nothing less than $100,000. 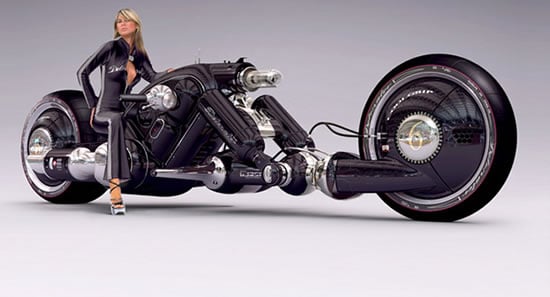 Tags from the story
Bike, Chopper