One of the most anticipated megayachts, built under the project name Fiji, was launched last week after 16 months after it was announced. Built by German yacht builder Lurssen, the 95-meter yacht has been named Madsummer by the owner and is scheduled for delivery in the summer of 2019. The American owner has owned a series of large yachts, which all carry the same name. However, this one is the biggest of all. The owner commissioned brokerage company Moran Yacht & Ship along with the captain to supervise the project during its construction. The exterior of the megayacht has been designed by London-based yacht and aircraft design studio Harrison Eidsgaard, which focused on giving the vessel a sleek and elegant appearance despite its massive interior volume. Wide exterior staircases seamlessly connect the large exterior decks, while the large pool and hot tub deck aft protected by glass bulwarks are definitely the highlights of the yacht. 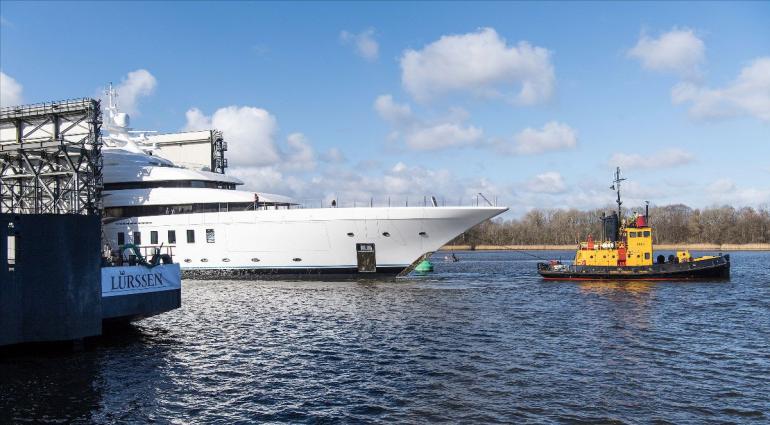 Rome-based designer Laura Sessa has given the task to craft the interior of the vessel and give it a contemporary modern vibe. “For this interior design yacht project, I invested inner artistic creativity due to my long relationship with the owner,” Laura Sessa said. “I playfully created spaces full of customized details and colours from the sea, emanating harmony and elegance. All decks were designed with a specific focus on comfort but also practicality. The result will be absolutely stunning.” The yacht houses 10 suites for 20 guests. Other special features include a spacious beach club and a spa zone with a sea terrace on the lower deck. The bow of the Madsummer vessel features a helipad, while the sun deck aft features hidden crane in the bulwark meant to handle an aeroboat.