We still have a few weeks before London’s supercar season draws to a close, which means the busy streets are still being hogged by flashy, ostentatious cars with supercar spotters and fans running around with their cameras, disrupting the traffic. But not everyone is a fan of these exotic machines and often can be seen showing their displeasure by talking to the press or writing on the internet. However, this time around, things got a bit out of hand and led to alleged vandalism of a $130,000 Porsche Panamera. The four-door German sports sedan covered in bright blue wrap with mirror finish was vandalized by unknown people who spray painted with expletives. Parked outside Harrods in London, the Porsche had “take off da rich give to da poor” painted on its hood along with the phrase “f**k you show off” on the doors. Vandals also wrote “robbed” on the vehicle’s bodywork. 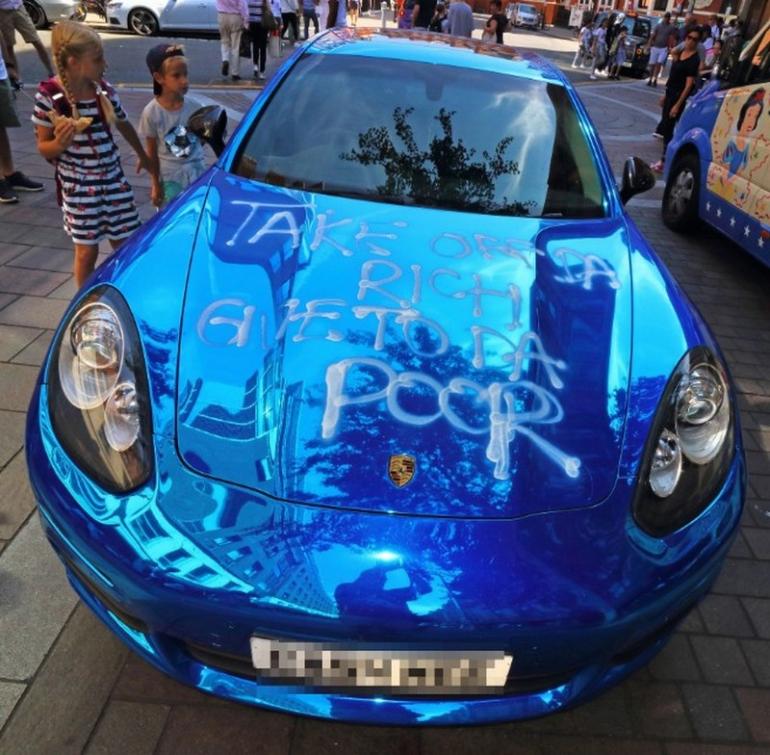 The Porsche is owned by Abdul Ilyas, a 21-year-old who describes himself as a businessman who owns a social media agency called Blu Capital Education. It was a terrible week for him as his Porsche was vandalized four days after his convertible BMW M4 was stolen from outside his mom’s house in Derby while he was in away Dubai. “I think it is jealousy. I think it is hate,” Abdul told Sun Online. “People can’t stand others being successful.” While shocked onlookers gathered around the damaged Porsche clicking pictures, no one seems have any information on the perpetrators. However, some people are speculating it to be nothing more than publicity stunt done to get more attention on the internet and increase follower count on social media platforms. A similar incident happened in London earlier this year when a 22-year-old millionaire named Lak Sira pulled a similar stunt with the help of friends to get more followers on Twitter and Instagram.