Sir Richard Branson announced the recent opening of the first ever commercial spaceport station in the world, in New Mexico. This revolutionary $209 million spaceport has been built-from-scratch and witnessed a dedicated ceremony of looking customers from over 21 countries. They have all made their deposits of $200,000 for the opportunity to fly to space in 2013 for an extraordinary experience that will truly prove to be out of this world. The 2.5 hour flight promises a five minute window of weightlessness and a space in the history books. An additional 450 astronauts worldwide have signed up to become a part of this new era of much anticipated Virgin Galactic space voyage.

It is also stated that Branson and his children, Sam and Holly, who will be the first commercial passengers on SpaceShipTwo, brought the event to a spectacular conclusion by officially naming the world’s first purpose-built spaceline terminal as the “Virgin Galactic Gateway to Space” while rappelling together from the roof of the striking new building.
The flight of the world-famous WhiteKnighttwo and SpaceShipTwo was truly a spectacle enjoyed by this privileged audience in the dedication of the Sir Norman Foster-designed building. All the final astronauts to take to outer space on the world’s first commercial spaceline were also officially declared at this event. The Virgin Galactic’s Gateway to Space hanger is a combined terminal facility that will host two WhiteKnighttwo vehicles and five SpaceShipTwo spacecraft’s. All of Virgin Galactic’s astronautical preparations and mission control center activities will take place in this iconic 120,000 square foot building in the future.
Branson’s thoughts on the beginning of this ground-breaking and world changing effort at transforming the future of human travel and experiences was simple, “Today is another history-making day for Virgin Galactic. We are here with a group of incredible people who are helping us lead the way in creating the most important new industrial sectors of the 21t century. We’ve never wavered in our commitment to the monumental task of pioneering safe, affordable and clean access to space, or to demonstrate that we mean business at each step of the way.” 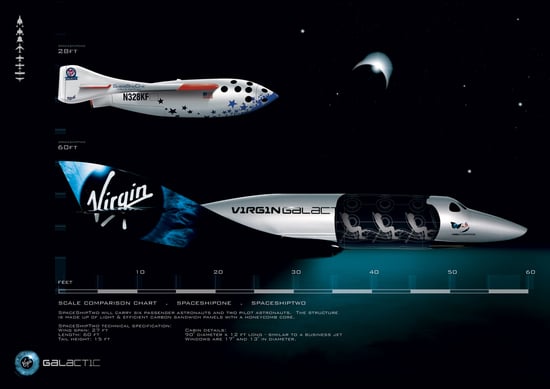