Land Rover is no stranger to pulling off some of the most daring stunts as a part of their marketing strategy. It was in 1986 when the British automaker captured everyone’s imagination by releasing the “Dam Climb” advert in which a Land Rover Defender climbs a nearly vertical face of a dam in the UK. While the Defender in the commercial was winched up, the company has performed a similar stunt recently but this time climbing on its own. In the first of its kind stunt, Land Rover used a Range Rover Sport Plug-in Hybrid EV to not only tackle the exhilarating 99 hairpin bends of China’s Tianmen Mountain but get to the summit where the famous natural rock arch known as Heaven’s Gate is by climbing 999 steps. 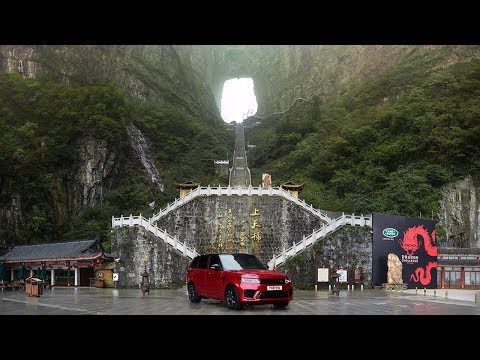 Piloted by Ho-Pin Tung, driver for Panasonic Jaguar Racing and Le Mans class-winner, the Range Rover hybrid SUV had to negotiate with the 45-degree climb of the steps, which leaves no room for error, whatsoever. “I’ve experienced Formula E, Formula 1 and won at the 24 Hours of Le Mans but this was, without doubt, one of the most demanding driving challenges I’ve ever faced,” he said in a recent release. The sporty SUV is powered by 2.0-liter Ingenium gas engine and an electric motor, which has a combined power output of 398 hp. The PHEV can travel up to 31 miles on electricity alone and Range Rover claims that both the gas engine and the electric motor were used to climb the 999 steps toward Heaven’s Gate. You can see the whole hair-raising stunt in the video below.