Remember the world’s biggest plane which was being built by Seattle-based Stratolaunch – a company which was started in 2011 by the late Microsoft co-founder Paul Allen. The gigantuous 500,000-pound aircraft with a 385-foot wingspan finally took the skies for the very first time last Saturday from Mojave Air and Space Port in Mojave, California. “We finally did it,” said Stratolaunch Systems CEO Jean Floyd at a news conference from the hangar at Mojave Air & Space Port. “It was an emotional moment to watch this bird take flight.” “I had imagined this moment for years, but I had never imagined it without Paul standing next to me,” Floyd added. Allen died last October at age 65 from complications related to non-Hodgkin’s lymphoma.

The Stratolaunch aircraft is a specially designed flying launch vehicle that will be used as a medium to put satellites into earth’s lower orbit. It’s an alternative method of launching satellites as compared to the usual procedure of using multiple-stage rockets for delivery by various space agencies across the world. The company aims to offer an economical way to launch satellites for the military, private companies, and even NASA. Stratolaunch describes its business model calls for getting satellites into space “as easy as booking an airline flight.” The aircraft is powered by six jet engines and has a dual-fuselage design, making it unique. It is designed to fly to an altitude of 35,000 feet, where it can drop rockets that ignite their own engines and boost themselves into orbit. The company has already announced Northrop Grumman will be its first customer, which plans to use Stratolaunch to send its Pegasus XL rocket into space. At the inaugural flight, Stratolaunch said the plane is expected to launch its first satellite sometime next year. 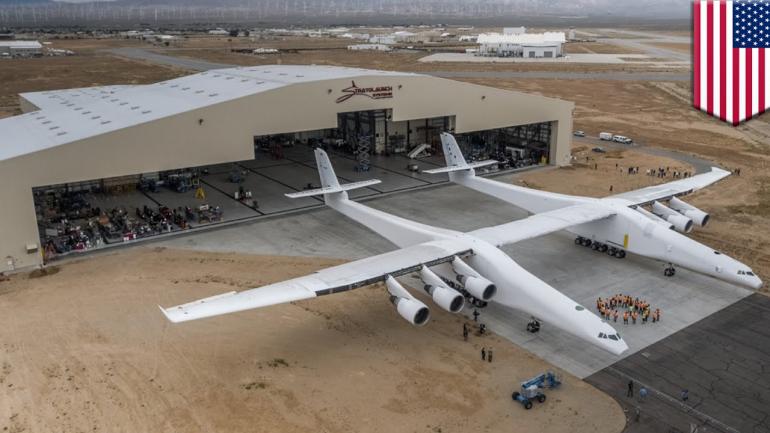 Tags from the story
Plane, Worlds-Largest