In the past few months we have seen quite a few companies across the world adopt the Google Glass and incorporate the wearable technology into their brand strategy. Last month we saw Virgin Atlantic use Google Glass to aid their staff at Heathrow airport to better deal with passengers travelling first class. And now Frederique Constant and Alpina jumped on the bandwagon to become the first watch companies to innovate the luxury timepiece market with the introduction of Google Glass. Though typically luxury watchmakers rely on their rich heritage and craftsmanship and steer away from such wearable technologies, but it’s the first instance of its kind. The American arm of the brands’ parent company, Frederique Constant Group, saw the potential in the Google Glass and its possible uses and became one of the select few working as part of Official Google Glass Explorer Program.

The brands announced their plans to incorporate Google Glass into their annual business strategies but didn’t give a clear roadmap and details on how they exactly plan to use it. According to Ralph Simons, president of Alpina Frederique Constant Americas and the initiator of this project: “Since gaining membership to the Google Glass Explorer Program, we have been actively developing best approaches to integrate these smart glasses into new and existing brand processes.” Frederique Constant and Alpina initially plan to use Google Glass as part of a cutting-edge training and communication process for its representatives worldwide as a new approach to merchandising stock. The augmented-reality glasses will allow brand directors to create brief ‘How To’ tutorial videos from a first person perspective on merchandising and technical functionality of watches. The brands later plan to use it for internal research and development practices. But there’s no word if it will be used by the brands to market their watches to potential buyers by giving a virtual of the brands’ talented design team and master watchmakers at work in Plan-les-Ouates, Switzerland or the working and the complications of the watch. The watchmaker might also use the wearable technology to profile their buyers at the retail outlets to reach out to their target customers better. 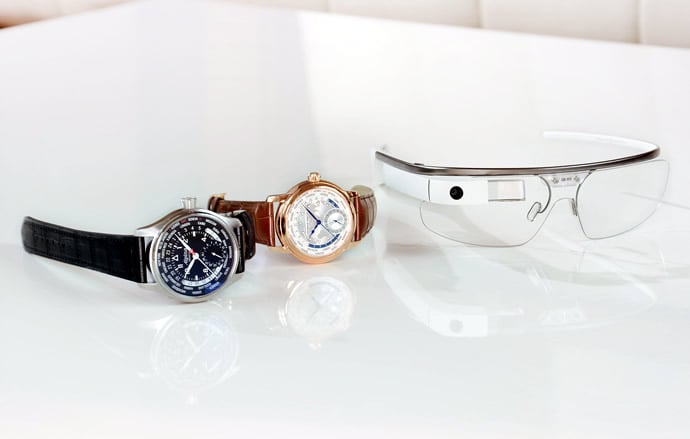 Tags from the story
Frederique-Constant