Omega’s latest addition to its Museum Collection is the Milestone 1941. This collector’s piece is the ninth addition to the Museum Collection. It is known that only a classic Omega timepiece that is more than fifty years old is eligible to make it to the collection. Once selected, it is re-issued by blending its design excellence with OMEGA’s innovative contemporary watchmaking tradition. This ninth edition is based on OMEGA’s reference “CK 2080. Launched way back in 1938, this stainless steel watch was popular among prominent military officers. Paying due respect to the timepiece, it is inspired from; the Milestone 1941 is powered by exclusive OMEGA caliber 3203. The white gold case measures 38 mm.

While the varnished black dial flaunts a telemetric scale on its first outer ring graduated in kilometers per hour, a minute track on its second outer ring and a “snail” tachymetric scale on the inner ring based on 1000 units per hour. The two sub-dials feature a 30 minute chronograph recorder at 3 o’clock and small seconds counter at 9 o’clock. Delivered in an exclusive museum box and limited to 1,941 pieces only, it can be strapped on with a black alligator strap. 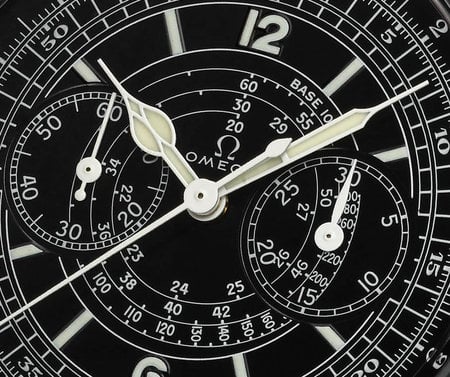