If you thought Louis Vuitton’s Tambours were rather fascinating, then good news, you wouldn’t have to trade up when switching from the daily use watch to another, more distinguished. Well, not completely. Hear me out. LV’s eVolution concept allows the wearer to have the same watch for different moments, by donning its iconic Tambour timepieces, with two different design alternatives. The magnificent GMT and Chrono GMT models have just received groundbreaking facelifts with proof coming straight from BaselWorld 2014.

With a “V” for Vuitton where the universal “Louis Vuitton” once lived (and still does in the alternatives), the Tambour family has recently acquired the Spin Time GMT and the Tourbillon Volant as stylish siblings. It all began with ceramic aluminum. Also known as “Black MMC” (Metal Matrix Composite), the material is a cutting-edge export from the world of aerospace research. The high friction-resistance of MMC, which protects the outer surfaces of spacecrafts as they enter and leave the earth’s atmosphere, clearly tickled the fancy of the maison’s watchmakers. 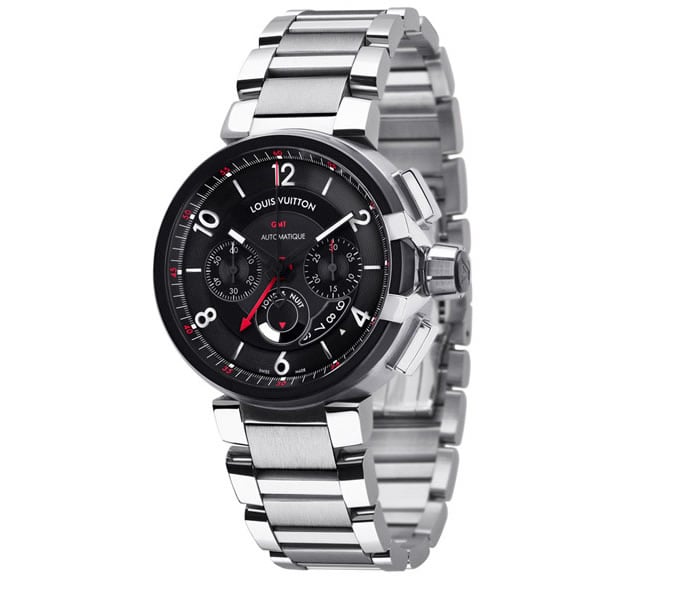 Enter Formula 1 as the French luxury brand’s technical partner. Why? Because that’s where MMC’s are used widely for engine manufacture! And also because the maison’s artisans are obviously more than just fanciful! Et voila! Result number one, a.k.a. Spin Time GMT, a spinoff (pun intended) from the traditional aesthetic of the Tambour GMT and eVolution line entrant in pink gold and Black MMC. With twelve rotating aluminum cubes in its 45 mm Tambour case, the Tambour eVolution Spin Time GMT comes with no fewer than seven perfectly assembled gold and Black MMC parts and the manufacture movement of the inspiring piece.

For the second, the firm’s historic Tourbillon Volant, with the first flying tourbillon automatic caliber to be developed and assembled in Louis Vuitton’s esteemed manufacture ‘La Fabrique du Temps’ finds its way to the stylish new the eVolution version. Once again, boasting Black MMC, it has a deep black dial featuring guilloché black, gold hands and appliqué hour markers, and a polished grey “V”. The flying construction, replete with the tourbillon held in place by its lower side, allows for a clear view of the Vuitton “V” as well as its movement at 6 o’clock, freely.