If it’s around, about, or of Kanye West, let it be known, it is super expensive! From Kanye West’s iconic 1 of 1 Goyard backpack purchased by the rapper at the 2010 Paris Fashion Week being re-sold for a grand $55,000 or $130 sneakers for infants, nothing associated with the billionaire ever comes cheap. Even the air around Kanye West’s presence can cop around $3400. Believe it or not, a Kanye West fan is selling a bag of what they claim is air from the rapper’s recent listening event for his long-awaited new album, ‘Donda.’ 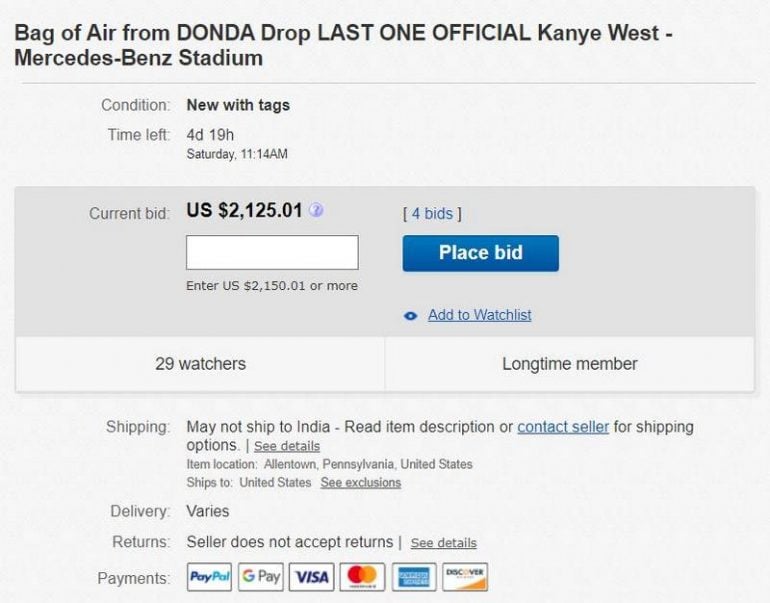 The Stronger rapper took to the Mercedes-Benz Stadium in Atlanta to promote the upcoming record, and more than 40,000 lucky fans attended. Keeping up with the trend of bottled air, one opportunist fan, imacanon16canz, is selling air from Ye’s listening party. The starting price for the Ziplock bag full of oxygen from the event is $3,333, to be exact. There’s no doubt this ‘apparent air’ will sell just the way Yeezy’s donned by Kanye during his performance at the 2008 Grammy Awards was sold for $1.8 million.

With millionaires lining up to buy bottled air from Mount Everest for $455,700, a bag of air from Kanye West’s Donda album launch party can be regarded as an integral part of Yeezy history for only $3333 seems like a steal. Initially listed for $3,333.33, the listing currently stands at $10,200, with 29 bids, and is scheduled to end on Wednesday, July 28. Do you want a whiff of the space where Kanye once stood?

Tags from the story
Kanye-West, Stupid