You wouldn’t think that a spider would be an alluring enough motif for a luxury company to draw inspiration from, but Montblanc proves us wrong yet again. The company first created a spider influenced writing instrument back in the 1920s. They were inspired by the eight-legged insect which is a recurring theme in literature as early as the metamorphosis of Arachne as told by Ovid in his Metamorphoses. The spider went on to become a prominent subject in the late 18th and early 20th centuries, featured in the writing of Valéry, Ponge and Mallarmé and has once again become a theme for Montblanc’s new High Artistry Heritage Metamorphosis Limited Edition collection.

This edition features a solid white gold cap and barrel set with a full pavé of brilliant diamonds. The spider web motif is created in three-dimension from Au 750 solid gold with every individual piece hand engraved and hand polished. The cap features a spider made from a pear cut diamond (approx. 0,62 ct D/F) with its legs set with another 16 diamonds. The jewel secured with a unique triple closure mechanism can be removed to be worn separately as a bracelet or a brooch. The top of the cap is modelled like a spider with a brilliant cut diamond as its body (5,25 cts, D/FL) and two brilliant cut diamonds as its eyes. The end of the pen’s clip is set with a baguette diamond. The nib features a special representation of the spider engraved in the Au750 solid gold embellished with two brilliant cut diamonds.

This edition marries the brilliant diamonds on the cap and barrel with solid champagne gold forming the intricate web design. The spider on the cap features an impressive 1,07 cts oval cut Myanmar ruby which can be removed and worn in a bracelet. The instrument is crowned by a brilliant cut diamond (approx. 5 cts, DIF/FL) flanked by two diamonds set alongside it representing the spider’s eyes. 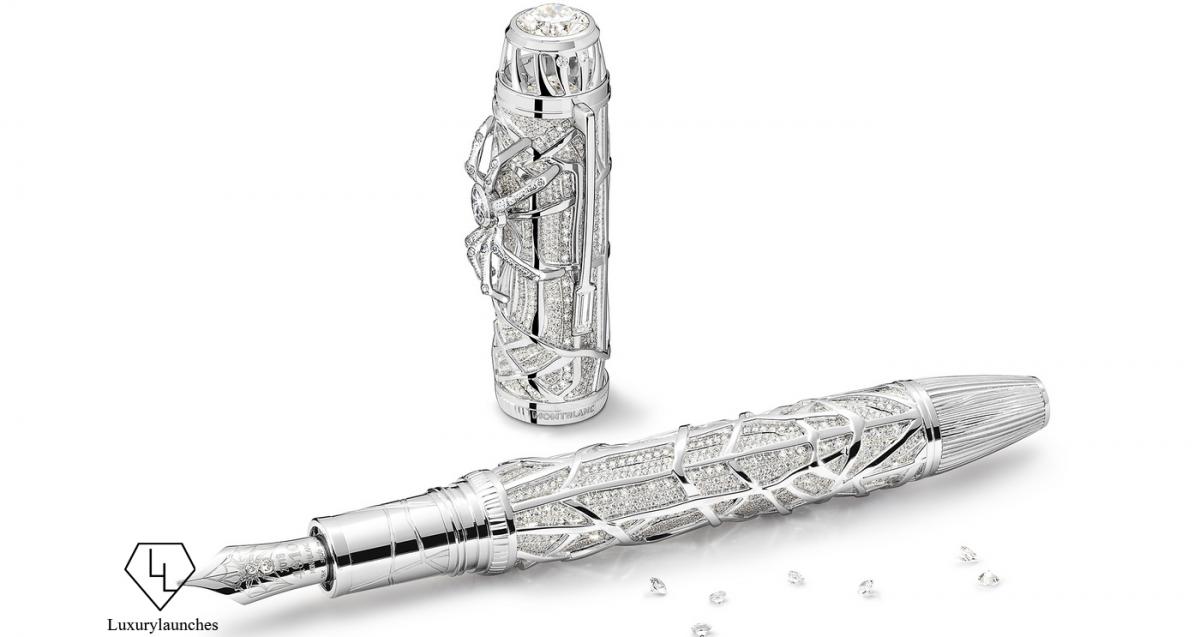 Montblanc High Artistry Heritage Spider Metamorphosis Limited Edition 1 Red Gold
The cap and barrel of this solid red gold instrument is fully set with a pavé with sapphire degradé from light blue to dark blue. On the cap is the three-dimensional red gold web and the spider. The movable spider can be worn as brooch or an elegant tiepin. As an homage to the creative influence of night on literary geniuses, the cap top is set with a 12,36 cts. Burmese star sapphire in cabochon cut with two small diamonds brilliant cut as the spider’s eyes. When viewed under a direct light source, a six-rayed star will appear to float across the surface of the star sapphire.

High Artistry Heritage Spider Metamorphosis Limited Edition 5, 10 and 88
Limited to just five pieces, the High Artistry Heritage Spider Metamorphosis Limited Edition 5 featurres a cap and barrel made of solid white gold, embellished with parts of a spiderweb in full pavé set of dark blue sapphires. Meanwhile the intricate spider web in solid gold is partly set with small and the spider on the side of the cap is set with a blue Madagascar oval cut 1,22 ct. sapphire. This sapphire can be worn as a tiepin. The cap top is crowned with a Star Sapphire cabochon from Myanmar, 8,04 ct with two small blue sapphires round cut as eyes. Because of the rare asterism phenomenon, the small inclusions in the stone make the star sapphire shimmer like a star by night.

For the High Artistry, Heritage Spider Metamorphosis Limited Edition 10 the web structure of the cap and barrel is made of solid white gold coated in ruthenium partly set with Tsavorites and diamonds. The textured effect is achieved by combining hand-engraving with stone-setting with part of the area inside the web are engraved as curls, with stones set onto the center of curls. The cap features a spider set with a bright yellow tourmaline ranging from 4.77 to 5.88 carats with brilliant diamonds on its legs. Lastly, the cap top is set with a green tourmaline.

The High Artistry, Heritage Spider Metamorphosis Limited Edition 88 references the design details from the Maison’s earlier interpretations of the spider in the 1920s and 1930s with a cap and barrel made from skeletonized solid white gold and a matt black underlay to give the spider’s web its three-dimensional effect. The barrel of the writing instrument has a solid white gold spider featuring two red garnet cabochons. In keeping with the red color theme, the cap top is made of precious resin in coral and ivory color. For the first time in Montblanc history and following years of development, the clip has been made with an asymmetrical “double shank” construction in full gold to guarantee both the stability and fully functionality of the clip. A representation of the spider has been hand-engraved and lacquered under the red garnet cabochon on the clip of the pen, so the image of the arachnid can be seen through the stone.

Montblanc has also created a High Artistry Spider Metamorphosis Notebook crafted in fine vegetable leather tanned with natural oils and tannins. Manufactured in the great Tuscan leather tradition in the Montblanc pelletteria in Florence, the cover has been decorated with a web overlay in ruthenium-coated metal with different finishes and colours. The spiders crawling across the cover of the notebook were created with a method known as lost-wax casting, each one made of metal coated with shiny ruthenium, before being applied by hand on the soft leather cover.

This fabulous collection is tempting enough to make you trade your laptops and tablets for pens and paper.

Tags from the story
Diamond-Studded, Mont-Blanc