Canines, cats, felines, and furry friends all have a special place in their owner’s hearts. Sometimes this love for the four-legged friends surpasses their love for their children. This is how some pets end up with mind-boggling inheritances. Some pet owners don’t shy away from making their pets a dashing dog or charming cat celebrity. Popular pets rake in money through sponsored posts and ads, and on reaching celebrity status, they also have their merchandise. A dog’s (and cat’s) world has been redefined with pets equalling and even surpassing their owners in terms of wealth. All about Cats have created an ultimate list of the world’s wealthiest pets, stating their Instagram earnings to reveal a list of the highest-earning & most influential pets. From hosting live events and creating their premium food brand, these 8 four-legged animals are stopping at nothing, nor is their ever-increasing wealth:

8. Doug the pug, $1.5 million (Earned)
If dogs wore crowns, Doug would be crowned king of pup-culture! With 3.5 Instagram followers and almost 12 million across all social media channels, the 6-year-old pup belonging to Leslie Mosier has an impressive career. The four-legged cutie plays Monchi in Oscar-nominated Mitchells vs. Machines! The puppy who earns roughly $22,400 per post on Instagram is also a People’s Choice Award Winner.
7. Pontiac, $5 million (Inherited)
America’s sweetheart Betty White was always known for her immense talent and a life-long animal lover. White was once quoted saying, “Once someone has had the good fortune to share a true love affair with a golden retriever, one’s life and one’s outlook is never quite the same.” Pontiac, an adorable golden retriever, was White’s most recent pet, who, by her admission, helped her feel mentally and physically younger. The dog had initially worked as a guide dog with ​​Guide Dogs for the Blind, an organization Betty had supported for years. It was whispered that Pontiac has $5 million set aside in Betty’s will, but Pontiac didn’t live to see the windfall. According to People, the friendly golden retriever died several years before Betty White did, in 2017.
6. Choupette, $13 million (Inherited)
The most famous cat in fashion, Choupette, is Karl Lagerfeld’s Birman kitty and the fashion moguls’ one true love. While Lagerfeld left her vast chunks of inheritance (more than Bill Gates intended to give his children), the kitty has made nearly $4.5 million in her own right from modeling contracts and endorsements. In 2015 alone, Choupette pocketed $2.7 million to collaborate with Shu Uemura and pose for a Vauxhall Corsa car calendar.
5. Jiffpom, $25 million (Earned)
This tiny Pomeranian dog born in Chicago holds two Guinness World Records for his speed. The most followed pooch on Instagram has nearly 10 million Instagram followers, a whopping 20.8 million TikTok followers, 90.800 followers on Twitter, 1.3 million followers on Facebook, and 258,000 subscribers on YouTube. A book titled “I Am Jiffpom,” a calendar and his line of emojis’ Jiffmoji’ later, this pom also got his day in Los Angeles: August 20th is Jiff Pom day.
4. Sadie, Sunny, Lauren, Layla, and Luke, $30 million (to be inherited)
Proving that being Oprah Winfrey’s pet is better than being a teacher’s pet are Sadie, Sunny, Lauren, Layla, and Luke, who will receive $30 million when Oprah dies, which is a relatively large chunk of her total fortune. Oprah’s fur family makes regular appearances on her Instagram. “Nothing makes me happier than being with my dogs.” The dog family enjoys special Saturday bath time rituals, reading, and a stroll on a sunny Saturday afternoon at their home in Montecito, California.
3. Olivia Benson, $97 million (Earned)
Taylor Swift’s Scottish fold cat enjoys a whopping $97 million net worth. The Blank space singer made her cat child famous on Instagram by setting up her account. What followed was a slew of extensive commercial work, cameos in music videos, and ads for Diet Coke and Keds shoes.
2. Nala_cat, $100 million (Earned)
Showing the world cats can be enterprising is cat food owner, Nala Cat, with a net worth of $100 million. With 4.3 million Instagram followers, she holds the Guinness World Records for the most followers on Instagram for a cat. Shannon Ellis and Pookie Methachittiphan adopted the Siamese-Persian. The blue eyed-beauty reportedly earns as much as $625,000 a year (in 2019) from appearances and brand endorsements. 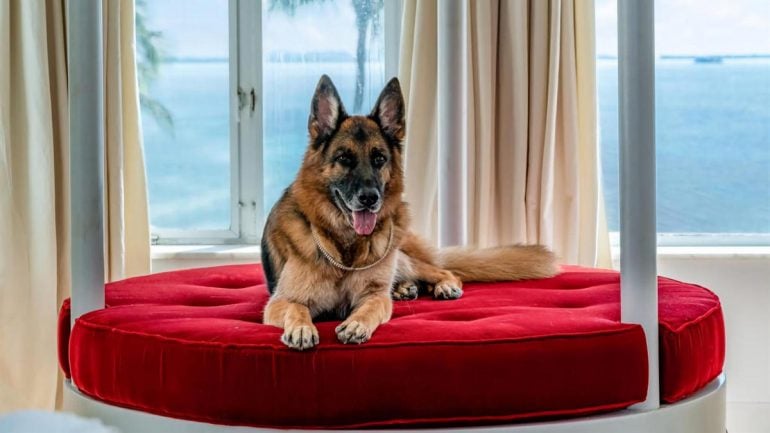 1. Gunther VI, $500 million (inherited and invested)
Five times richer than Nala Cat is the world’s richest pet, a German shepherd known as Gunther VI. The canine prince inherited a late German countess’s multimillion-dollar trust and has it all right from mansions and private jet to savoring the most delicate meat and caviar. On the one hand, you may find him doing regular dog things like eating, playing, and rolling in the garden; but what sets him apart is he does all this in Madonna’s former home! Gunther VI is owned by the Gunther Corporation that manages the dog’s estate and fortune.