Mercedes S-Guard is the armored variant of the S-Class luxury saloon and it has always been a popular choice for high-profile people including dictators and government officials. The armored car is widely used at the diplomatic level to protect world leaders and as much as ninety governments worldwide are known to use the S-Guard for transport of government leaders and dignitaries. After introducing the new generation of Mercedes S-Class last year, the German automaker has recently started manufacturing their latest model from the bulletproof series, the 2015 S-Class Guard. The special coachbuilt variant’s production starts about a year after the ‘regular’ S-Class started being manufactured in Sindelfingen, Germany. 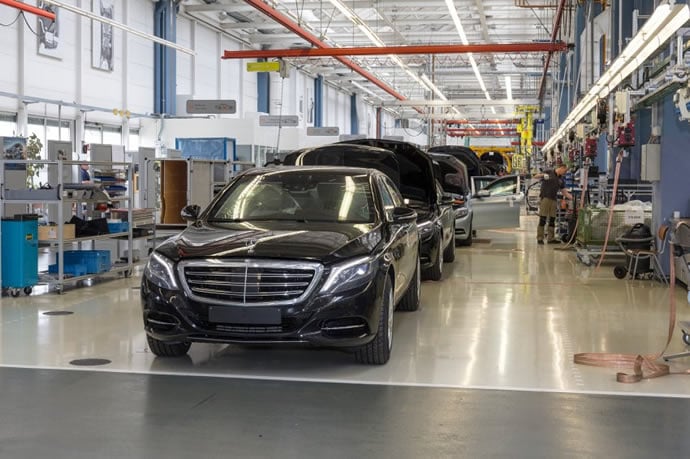 The Mercedes S-Class Guard is hand-built on two floors of the Sindelfingen plant with specific S-Guard enhancements integrated at multiple stages throughout the production process. The 2015 Mercedes-Benz S-Class Guard comes with armor that has the VR6/VR7 protection level, designated to withstand projectiles from military weapons that “travel twice as fast as bullets fired from a revolver,” plus shrapnel from hand grenades and other similar explosives. The windshield of the car alone is about 10 cm thick and weighs about 135 kg (298 pounds) and 5 cm thick steel plates are added on most parts around the cabin to protect the passengers. The new armored Mercedes-Benz S-Class model currently is only available as the S 600 Guard variant and it is priced around 200,000 Euros ($268,000 approximately)more that the ‘regular’ model.