Over the last 45 years, German aftermarket tuning brand Brabus has made its name by building souped-up versions of Mercedes-Benz vehicles. The company recently even decided to foray into making high-performance boats. But little did we expect Brabus to get into tuning motorcycles until we came across a few spy shots a couple of weeks back. Well, here it is. Brabus has lifted the veil off its first-ever motorbike – the Brabus 1300 R. For its latest venture, the German tuning brand collaborated with Austrian manufacturer KTM and used the 1290 Super Duke R Evo as a base for its first two-wheeled creation. 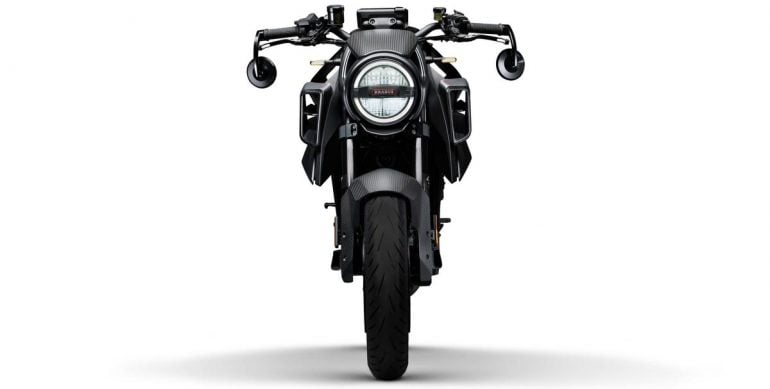 The KTM 1290 Super Duke R Evo is a hyper-naked motorbike that sits on the top of the Austrian brand’s range of naked motorcycles. The streetfighter packs a 1301cc V-twin engine capable of producing 177bhp and 103 pound-feet of torque. Surprisingly, Brabus decided not to fiddle with the engine to extract more power – something it’s famous for; Although, the Brabus 1300 R does get new air intakes on either side of the tank along with a bespoke, stacked exhaust system.

The Brabus motorbike also shares a lot of equipment and hardware that come as standard on the KTM 1290 Super Duke R Evo, which include things like the frame, the 4.2-gallon steel fuel tank, the single-sided swingarm, and even the semi-active suspension system. The Brabus does come fitted with the Suspension Pro system which is an optional extra on the Evo. The Suspension Pro system lets the rider control the rear ride height from the TFT dash along with automatically adjusting the rear preload. 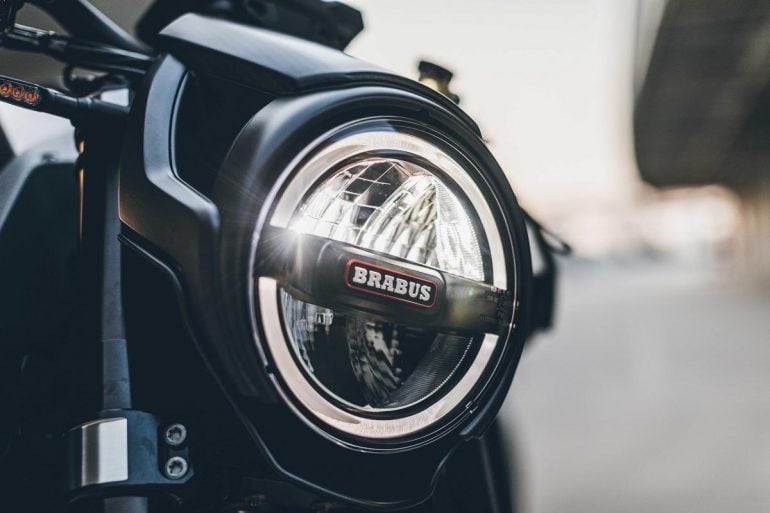 The KTM 1290 Super Duke R Evo is packed with electronics, making it the most technically advanced product in KTM’s line-up, and Brabus continues to use all of them without any alterations. 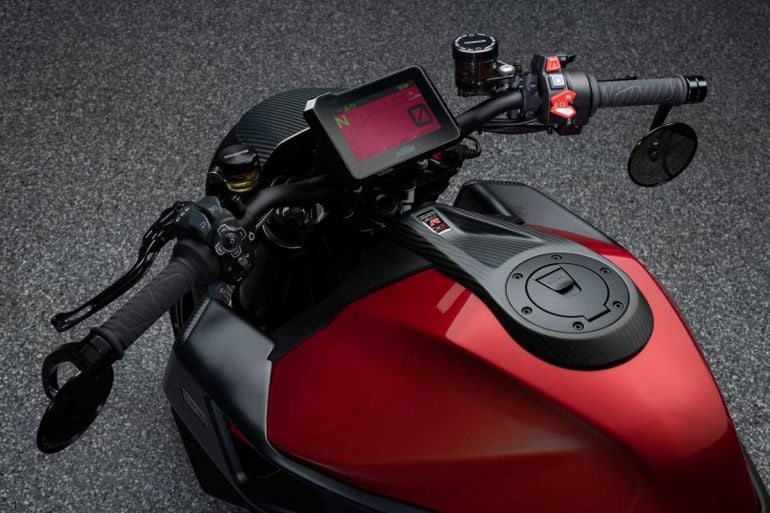 Coming to the part where the Brabus 1300 R is different from the KTM, the upfitted version of the hypernaked motorbike has been given a completely different look. KTM’s signature styling with sharp lines and angles has been replaced with a design that is replete with boxy elements and square shapes. 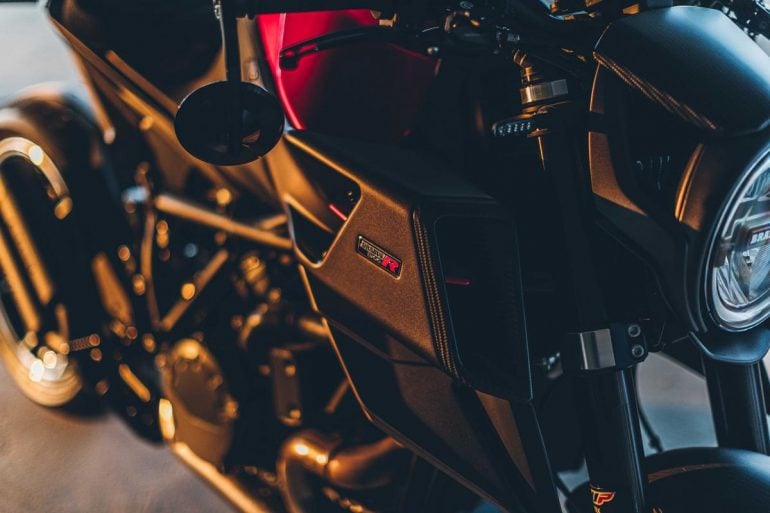 The Brabus 1300 R looks like a two-wheeled version of the tuned G-Wagen by the German company, especially thanks to the round headlight. The blocky air intakes also give the motorbike a butch look more appropriate for an SUV than a racetrack tool. In typical Brabus fashion, the motorcycle is covered in naked carbon fiber, including most of the panels, the front cowl, and the rear subframe. 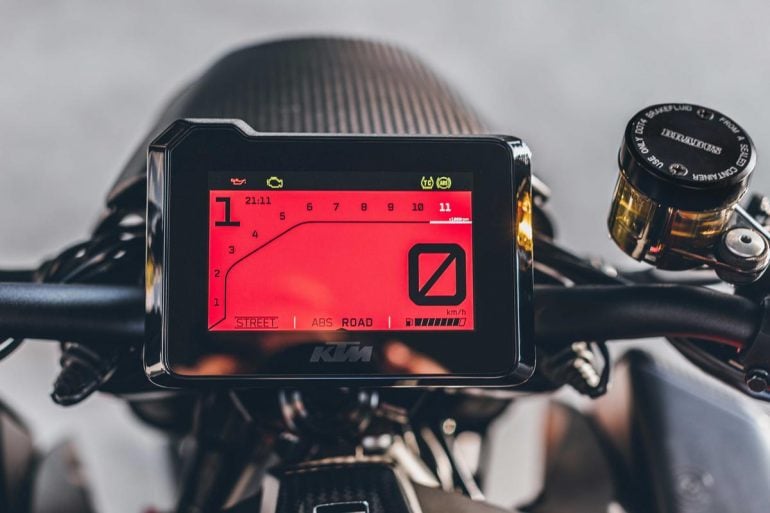 The Brabus 1300 R also gets a bespoke seat that’s available in red or black. Inspired by the seats in Brabus’s cars, it gets the same quilted finish along with a heating function and a Brabus logo. Additionally, the motorcycle gets more Brabus-specific parts which include CNC-milled Gilles footpegs, machined Magura levers, and specially-crafted Monoblock Z wheels nine-spoke design that matches the rims used on many Brabus cars. The Brabus motorcycle will be available in two colors: Magma Red and Signature Black. Only 77 examples of each will be made by Brabus which can be yours for £34,549 GBP (roughly $47,000). However, it won’t be sold in North America. 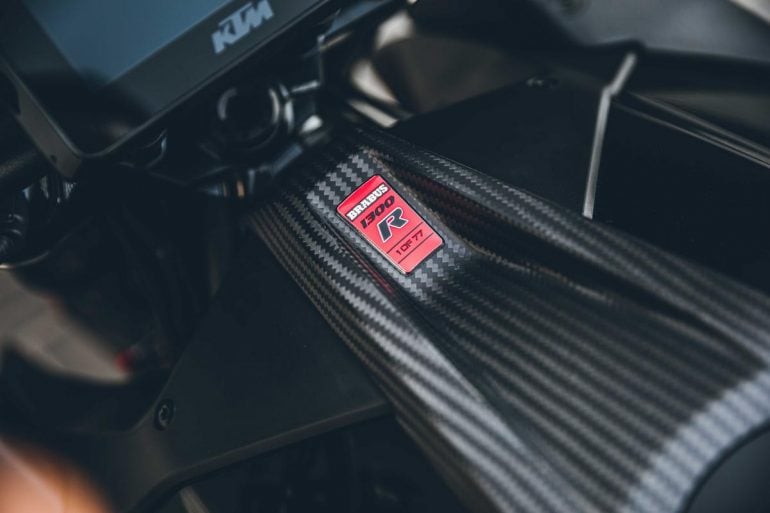 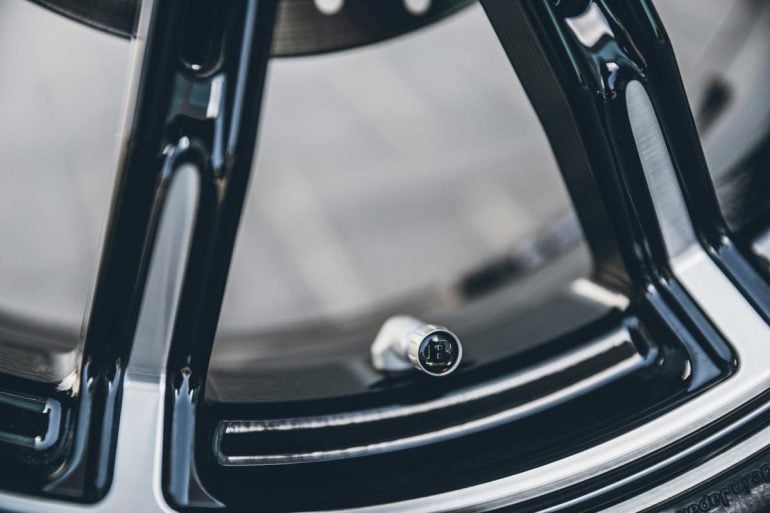 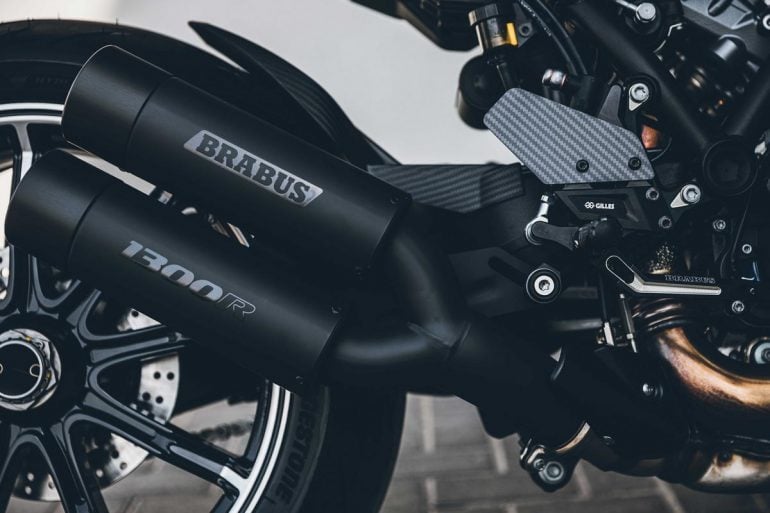 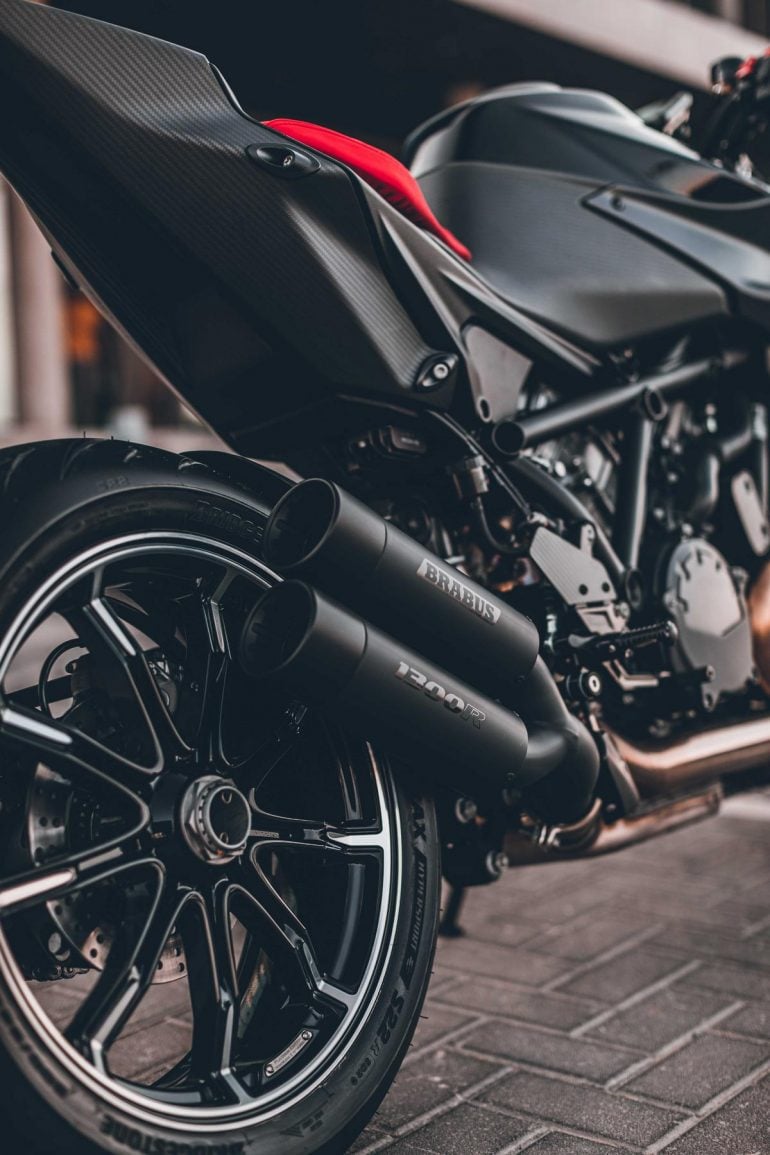 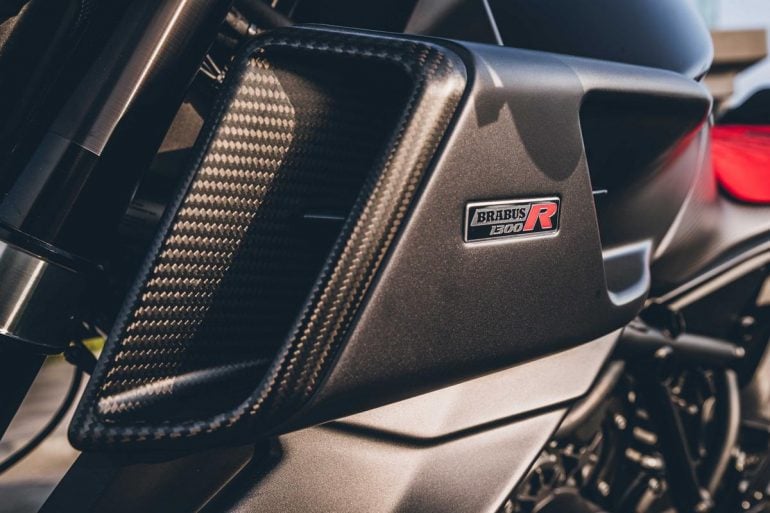 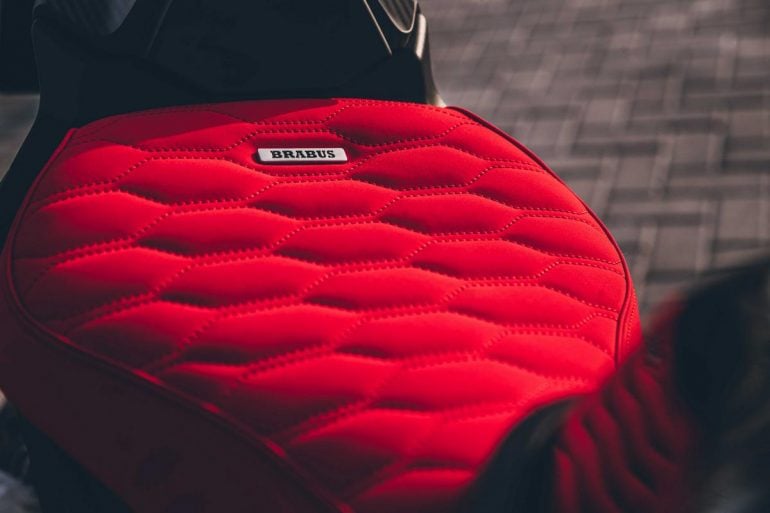 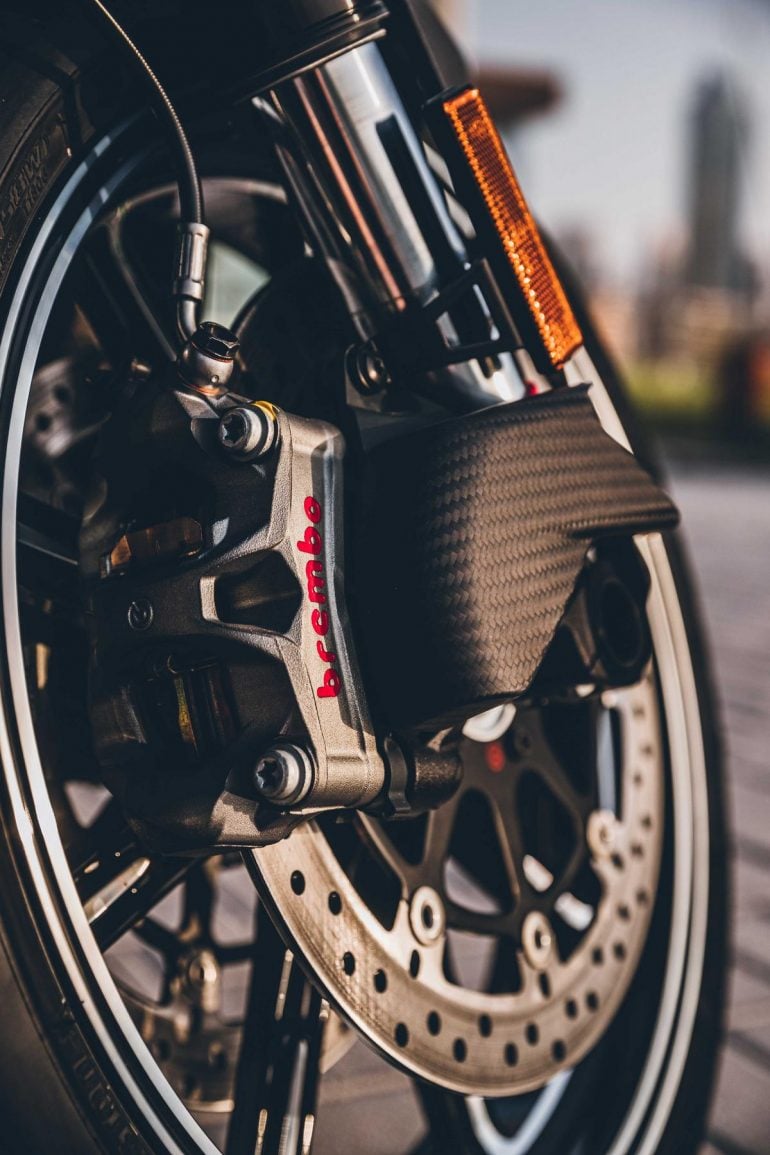 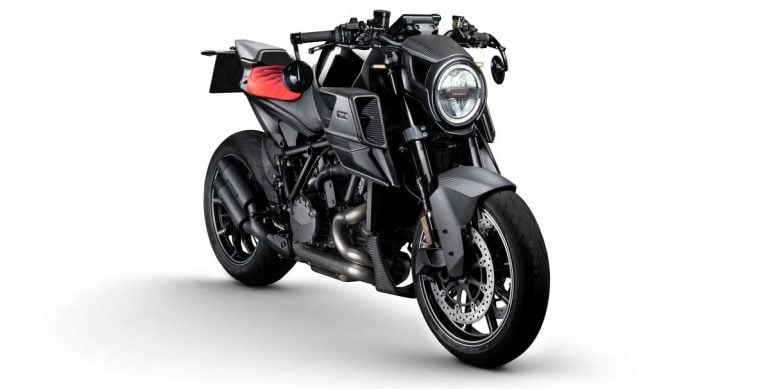