Think of Denmark and a few things that come first in your mind are Lego, Carlsberg and the country’s love for the environment,. A country which loves bicycles as a mode of transport isn’t quite the right place for a fat American chopper, but it’s an unlikely home to a company that builds customized choppers and is credited for making the world’s most expensive bike. The Danish company ‘Lauge Jensen’ hand-builds only one model named the ‘Great Dane’, but no two motorcycles are same and each one is built to order. Its newest creation named ‘Gold Bike’ is plated with 24 carat gold and still has 268 diamonds encrusting it. The special edition chopper is on show at the Hamburg Motorcycle Days expo and is considered to be the most expensive motorcycle at £535,000 which is equivalent to $880,000.

Though we do come across a lot of gold colored cars and bikes like Mikael Lugnegard’s Golden Bike and have also seen a silver plated custom Royal Enfield from India, but it’s for the first time that we have seen a 24 carat gold plated motorcycle. The custom Lauge Jensen motorcycle is powered by an 1807cc twin cylinder engine which churns out a maximum output of 90hp at 3200rpm. It even has a crocodile leather seat to match with the exotic gold body and took the company six month to complete the bike. 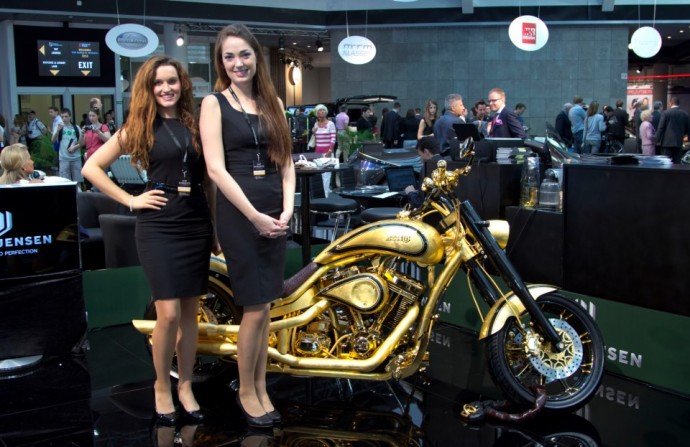