Over the last couple of years, we’ve seen several life-size automotive replicas made with Lego bricks, including the incredible Lego version of the Bugatti Chiron. The latest car to get Lego treatment is the Toyota Supra that has been created to celebrate the 35th anniversary of the legendary Supra nameplate. The Lego Toyota GR Supra full-scale replica is based on the 35th Anniversary Special Edition of the sports car that just debuted for the Japanese market. Finished in a vibrant shade of yellow, the Lego Supra is powered by an electric motor that gives the replica a top speed of 17mph. 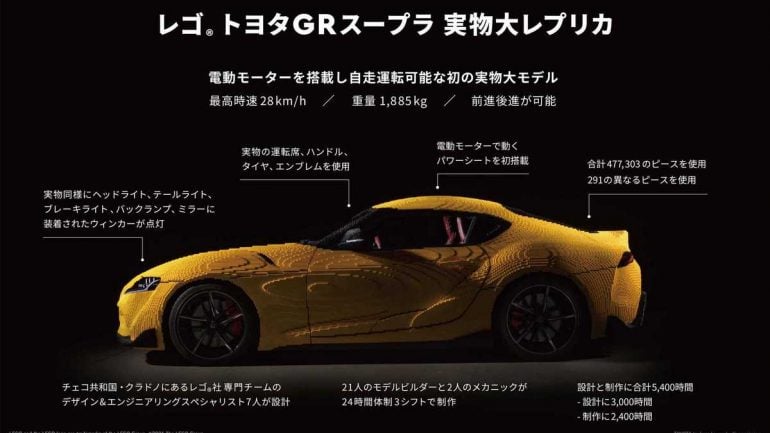 The life-size Lego version of the Japanese sports car also gets functional headlights and tail lamps and rolls on proper road tires, as well. Although much of the interior is made of Lego bricks, the driver seat and steering wheel have been taken from the road-going Supra. According to the official press release, it took 477,303 individual Lego bricks to assemble this replica, making it quite heavy. The Lego Supra tips the scale at 4,150 pounds, which is a lot more than the actual Supra’s 3,615-pound curb weight.

The full-size Lego Toyota Supra will be on display Legoland Japan alongside the matching Anniversary Edition till October 11. After that, the pair will travel to different locations of the Super GT racing league with Toyota’s Gazoo Racing. As far as the 35th Anniversary Special Edition is concerned, the manufacturer will build only 35 four-cylinder SZ-R models and 35 inline-six RZ, all earmarked for the Japanese market. Toyota announced that the buyers for the 70 special edition cars will be selected through a raffle.

[Via: Road and Track]