In the last couple of weeks, we have covered quite a few premium bicycles like the Gold Cycle Two and limited edition Pininfarina Fuoriserie. However, in case you have looking for a more understated alternative that puts a smaller dent on the wallet, then Orro’s Gold Limited Edition bike is definitely something you should have a look at. Orro was unveiled in April as the in-house bike brand of i-ride, a UK distributor whose brand stable includes 3T, Prologo, Fulcrum and Continental, and those parts feature prominently on the Orro spec sheet. The British company has launched the Gold Limited Edition bike that takes the firm’s existing flagship chassis and gives it a hand-painted finish, with two build options based around Shimano Dura-Ace and Campagnolo Chorus components. 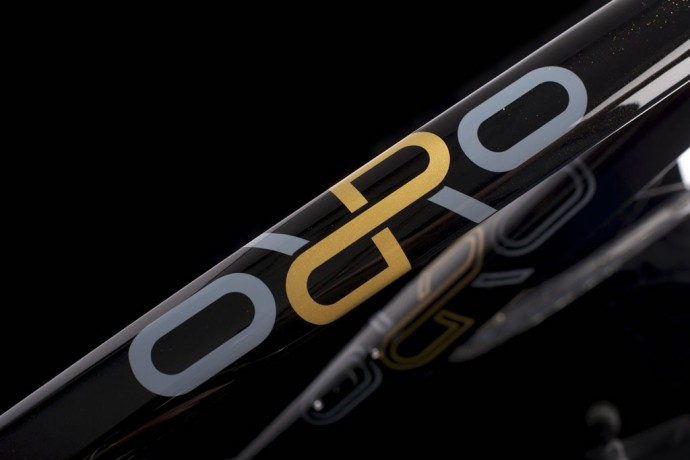 Orro’s Gold Limited Edition is the same frame under the skin as the original Gold that was launched earlier this year. It retains the relaxed geometry, oversized chainstays and BB30 bottom bracket, tapered head tube with a 1-1/2″ lower bearing and internal cable routing, but it’s been given a new lick of paint, with the matte black of the regular machine, which is still available, swapped for an gloss black with a gold fleck finish. The standard Gold is available with mechanical Shimano Ultegra or Shimano Ultegra Di2 for £1,999.99 ($3190 approx) and £2,599.99 (around $4150) respectively. The Gold Limited Edition comes with mechanical Shimano Dura-Ace or new-for-2015 Campagnolo Chorus components – both for £2,999.99 ($4780). The two Gold Limited Edition builds get Fulcrum Racing 3 wheels wrapped in 25c Continental Grand Prix tyres, 3T finishing kit and a Prologo Kappa saddle.

Tags from the story
Bicycles, Limited-Edition