Our recent listicle on the top 7 fastest electric cars in the world has gone on to receive a lot of attention over the last few weeks, which prompted us to do something similar on motorcycles; after all, motorcycles have always been synonymous with adrenaline-inducing speed. However, curating a list of the fastest production motorcycles is tricky. Firstly, the tests conducted for speed run have almost never been sanctioned by official bodies and mostly done by magazines under a variety of unequal or undefined conditions. Secondly, at the peak of speed war amongst motorcycle manufacturers in the 1990s, there was a demand for an import ban against high-speed motorcycles due to safety reasons. This led to an informal gentlemen’s agreement between European and Japanese manufacturers that restricted the top speed to 186mph; which meant all high-performance motorcycles were suddenly forced to settle for a common top speed. But we have tried out best to make a list that includes the most iconic names from the last hundred years that have held the record for the fastest production motorcycle. 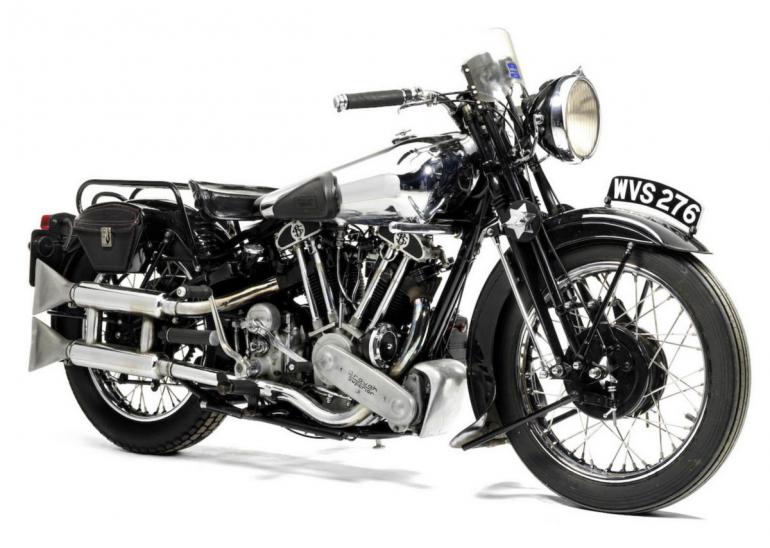 Brough Superior SS100 Pendine (1925)
The first two decades of the 20th century were dominated by big, burly V-twins by Harley-Davidson and Indian as far as performance motorcycles are concerned. However, a British racer named George Brough had plans to challenge the two American heavyweights by making motorcycles that not only offer exceptional performance and handling but also have unmatched build quality. That’s how Brough Superior was born in 1919 with a small workshop in Nottingham, England. The idea was to target the affluent, class-conscious segment. T. E. Lawrence, Lawrence of Arabia, famously owned 8 Brough Superiors and was killed in an accident while riding one. From 1919 to 1940, Brough Superior built sporty high-end motorcycles that were dubbed the “Rolls-Royce of Motorcycles.” Out of all the models by Brough Superior, the one that etched its name in history is the SS100 – a motorcycle designed by George Brough himself. While each example of the SS100 was custom built for the customer, all of them came with the guarantee to hit a top speed of 100mph. The Pendine Racing Model from 1925 managed to hit a top speed of 110mph and went on to set a number of world speed records that remained unbroken for 24 years. 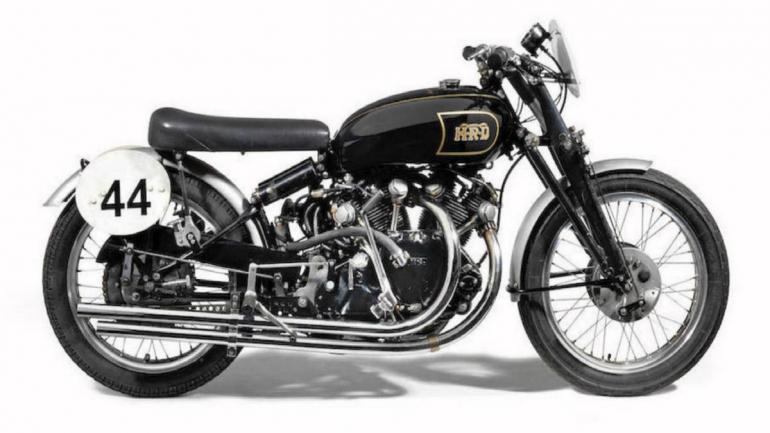 Vincent Black Lightning (1949)
The speed record held by the Brough Superior SS100 Pendine was broken almost a quarter-century later by another British motorcycle manufacturer Vincent-HRD. Called the Vincent Black Lightning, the sporty motorcycle was a factory-modified version of the Black Shadow, built in Hertfordshire, the UK from 1948 to 1952. Made to order, the standard Black Lightning came with special racing components such as magnesium alloy components, racing tires with alloy rims, rear-set foot controls, a single-seat setup, and lightweight aluminum mudguards. Weighing only 380lb, the Black Lightning had an incredible power-to-weight ratio thanks to the race-tuned 998 cc air-cooled OHV pushrod V-twin producing 70bhp. As a result, the Black Lightning could reach a top speed of 150mph, shattering the previous record by a huge margin. 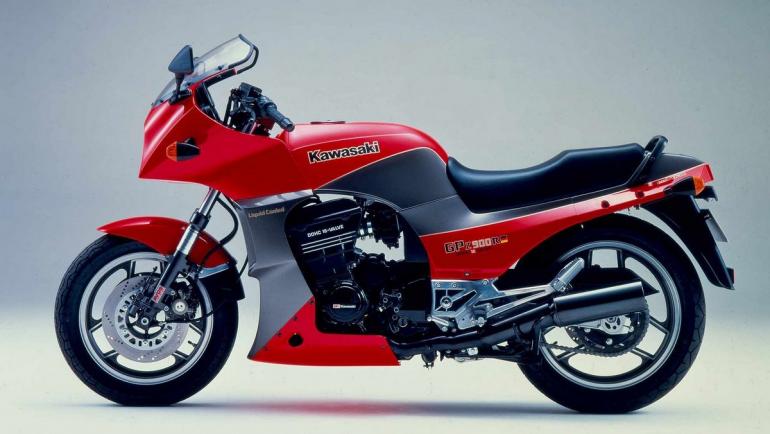 Kawasaki GPZ900R Ninja (1984)
The arrival of Kawasaki GPZ900R heralded the era of Japanese dominance in performance motorcycling. The 1984 GPZ900R was the first Kawasaki motorcycle to be officially marketed in North America under the Ninja brand name. Although Honda VF1000R technically was the first to exceed the Vincent Black Lightning’s top speed after 35 years, the GPZ900R introduced in the same year earned the title of the fastest production motorcycle with a top speed of 151 mph. Just six months after it was officially unveiled, three GPZ900R bikes took part in the iconic Isle of Man Production TT finishing in first and second places. It also became a cultural icon after being famously featured in the movie Top Gun. Powering the motorbike is a 908cc 4-cylinder engine transversely mounted producing 115bhp in standard tune. 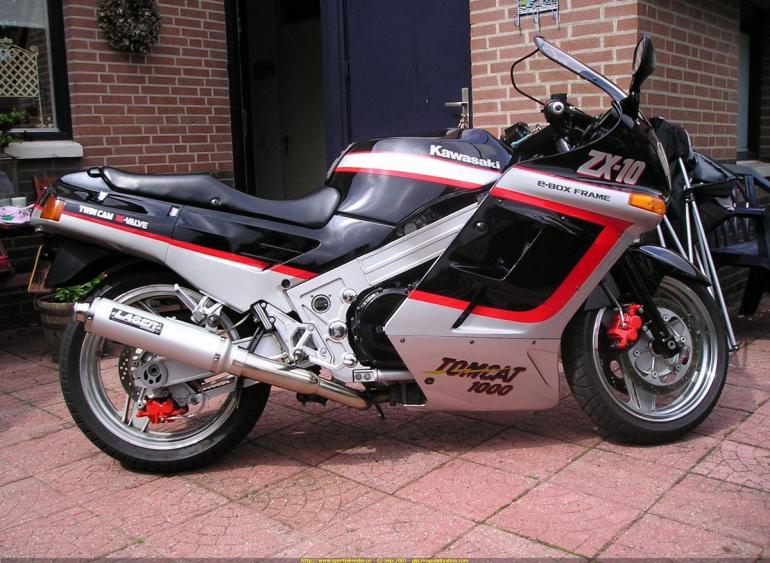 Kawasaki Tomcat ZX-10 (1988)
With the launch of Z1 and GPZ900R, Kawasaki had already established itself as a leading name in the sports motorcycle category and its place was further cemented after the introduction of the ZX-10 “Tomcat”– a flagship superbike that replaced the GPZ1000RX. A precursor to the current Kawasaki ZX-10R, the Tomcat was manufactured between 1988 and 1990 as a part of the brand’s Ninja line-up. The motorcycle was Kawasaki’s first aluminum perimeter frame, a design which has since become standard, and also introduced improved aerodynamics. As a result, the ZX-10 had a top speed of 165mph, making it the fastest production bike of its time. It was powered by a 996cc, 4-stroke, inline-four engine producing 135hp. 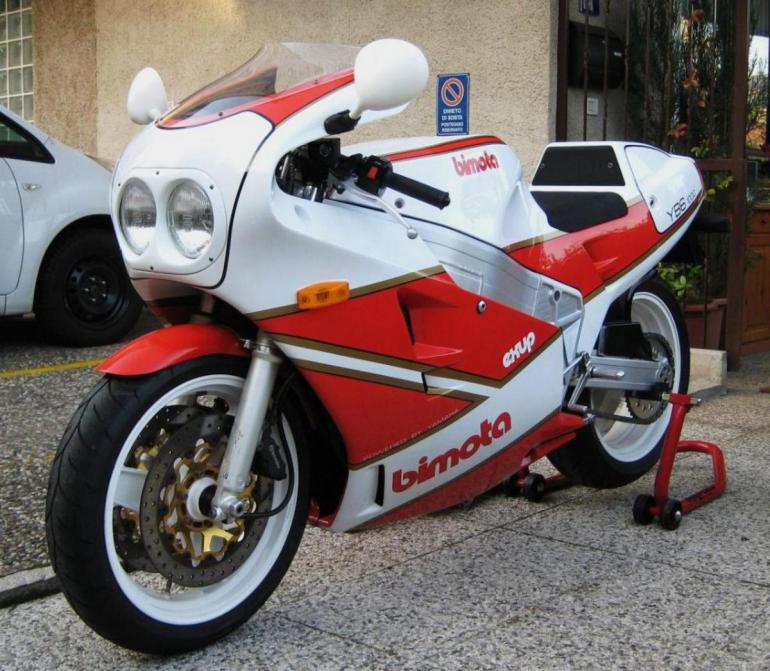 Bimota YB6 EXUP (1989)
In the era dominated by Japanese motorcycle manufacturers, the small Italian manufacturer called Bimota made limited motorcycles based on Yamaha and Ducati bikes. The Bimota sports bikes became popular in the ‘80s and ’90s for their exceptional handling characteristics and performance. One of the best examples is the YB6 EXUP that was produced in limited numbers between 1989 and 1990. Along with featuring top-of-the-line components such as Marzocchi suspension, massive Brembo brakes, and twin-spar alloy chassis, the motorcycle was powered by a Yamaha-sourced 1002cc inline-four engine producing 145hp. It had a claimed top speed of 170mph, which was not only higher than the Yamaha motorcycle it was based on but also the fastest production bike in the world at that time. 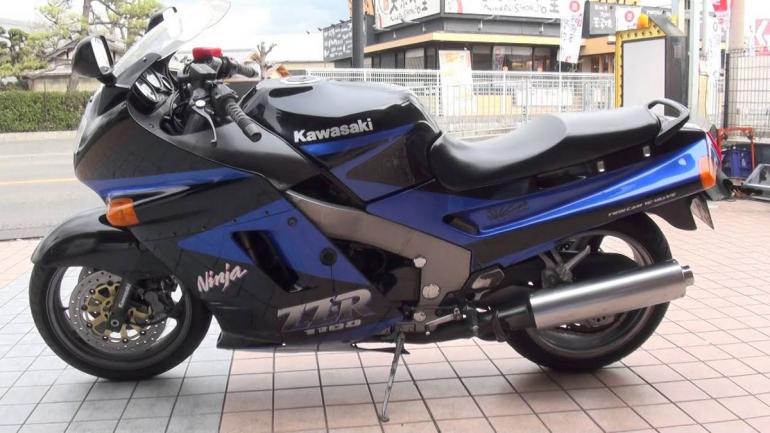 Kawasaki Ninja ZZ-R1100 (ZX-11) (1990)
Kawasaki was quick to retain its title of the fastest production motorcycle in the world with the launch of the ZZR1100, also known as the Ninja ZX-11. The sports-touring motorcycle is often regarded as the one that started the speed war amongst leading manufacturers in the ‘90s, which finally led to the 1999 gentlemen’s agreement. The flagship motorbike was a replacement for the Tomcat ZX-10 and was in production from 1990 to 2001. It was powered by a liquid-cooled DOHC 1,052cc in-line four-cylinder engine that churned out a claimed output of 145hp. When introduced in 1990, it had a claimed top speed of 176mph, making it considerably faster than its predecessor and the Bimota YB6 EXUP. 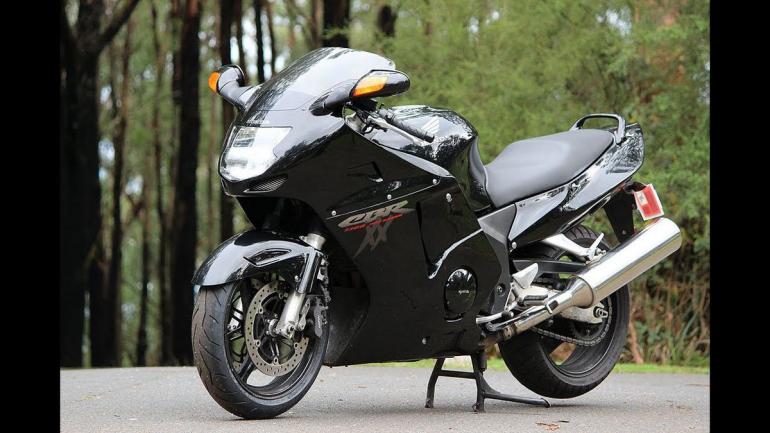 Honda CBR1100XX Super Blackbird (1996)
The title of the fastest production motorcycle was snatched by Honda from Kawasaki with the launch of CBR1100XX Super Blackbird – one of the most iconic motorcycles from the ‘90s. Developed to challenge the Kawasaki Ninja ZX-11, the sports-tourer was named after the Lockheed SR-7 bomber which is also a speed record holder. In a test conducted by the Sport Rider magazine in 1997, the CBR1100XX was tested at a top speed of 178.5 mph, earning it the title. The Super Blackbird was introduced in 1996 and remained in production till 2007. Power was derived from a 1137cc inline-four engine that produced 137hp in the highest state of tune by the factory. 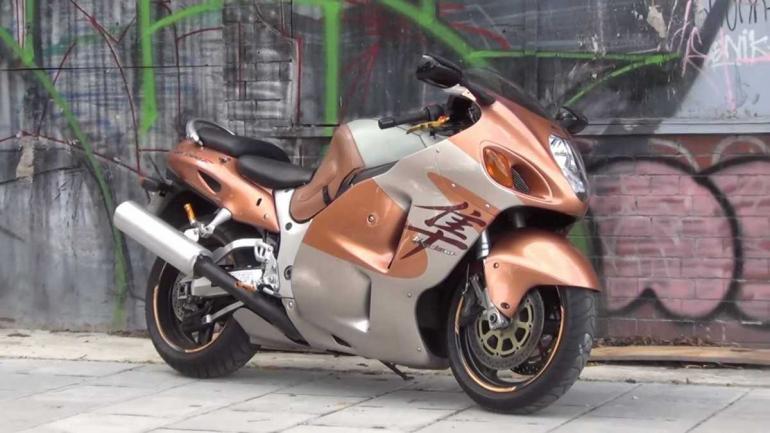 Suzuki GSX-1300R Hayabusa (1998)
Considered by many as one of the most iconic motorcycles ever made, the Suzuki Hayabusa arrived right at the end of the speed war and a restriction on the top speed had to be introduced as things were getting out of control. The all-round performer was created with the intention to beat the Super Blackbird and gain the title of the fastest production motorcycle. Powered by a 1300cc inline-four engine, the de-restricted first-generation version could reach a top speed of 194mph. With the informal agreement between the Japanese and European manufacturers in 1999 restricting the top speed to 186 mph (300km/h), the Hayabusa is technically the fastest street-legal, production motorbike ever made. 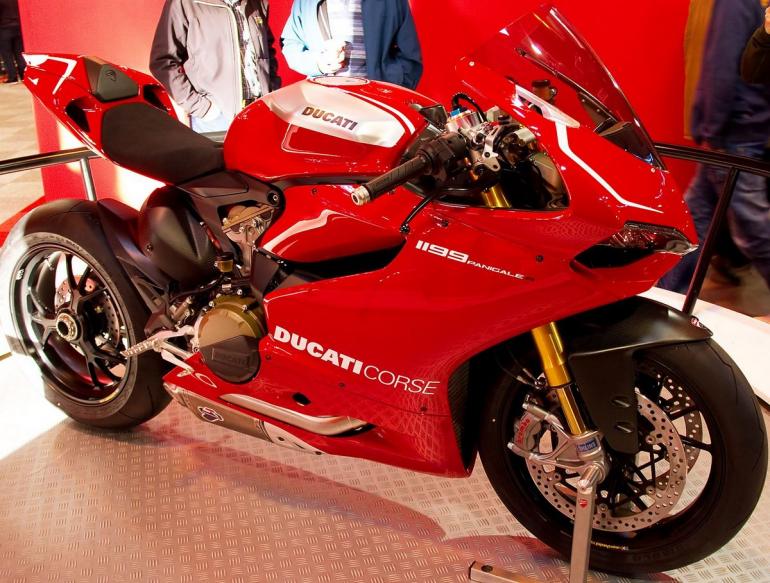 Ducati Panigale R (2013)
With this we reach the part of the list where the motorcycles belong to the era of restricted top speeds under the 1999 agreement between Japanese and European manufacturers. While the street-legal, production motorcycles have technically abided by the agreement, manufacturers found creative ways of going past it. In 2013, Ducati launched the Panigale R World Superbike homologation model based on the standard 1199 Panigale. Powered by an upgraded version of the 1198cc L-Twin with lightened engine internals, including titanium connecting rods, and carbon fiber external parts, it produced a maximum output of 195hp. However, the Italian manufacturer also supplied a track-only Termignoni exhaust that not only reduced the overall weight but also increased the output to 202hp. A test conducted by Road & Track magazine claimed the top speed of the Panigale R with the track-only exhaust to be around 202mph. 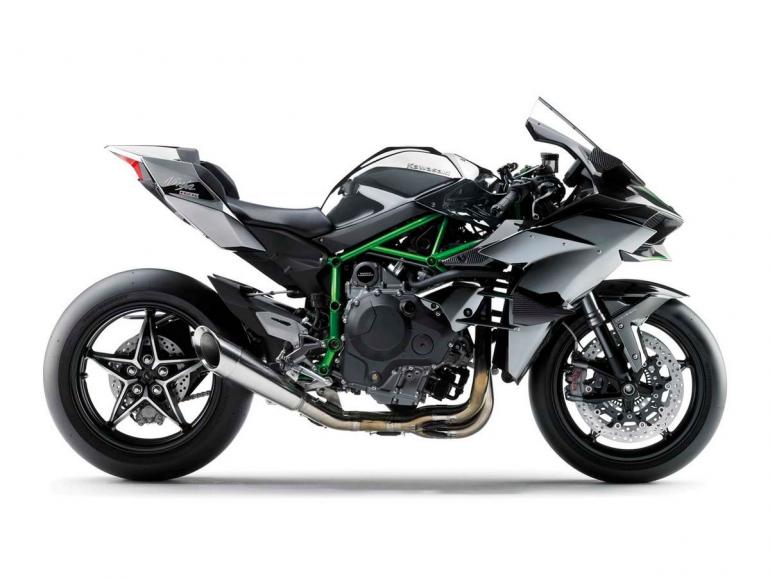 Kawasaki Ninja H2R (2015)
We are at the end of the list with the motorcycle that currently holds the record of the fastest production motorcycle, the mighty Kawasaki Ninja H2R. The track-only motorcycle blew everyone’s minds in 2016 when Turkish racer Kenan Sofuoglu made a record-setting attempt and managed to reach a top speed of 400km/h (250mph). Powered by a 998cc inline-four with a variable-speed centrifugal-type supercharger, the Ninja H2R is claimed to have a maximum output of 310hp, which most powerful production motorcycle on the market. In fact, it has 50% more power than the fastest street-legal motorcycles. The street-legal Ninja H2 has the same engine with a different state of tune and it makes 200hp (210hp with ram air).