Are you one of those thrill-seekers who find the standard rides at theme parks, including the crazy roller coasters, not so exciting? Well, there is a new ride in the making which will definitely get your adrenaline gland tingling. A group of Swiss engineers has created an amusement park ride that looks like an idea of pure evil genius. The final destination style ride created by a Swiss firm ABC Rides is named ‘The Tourbillion’. Yes, you guess it right; the ride has been named the Tourbillion as it mechanically similar to the watch escapement (tripe axis tourbillion to be precise). It took the company three years to create The Tourbillion and this absolutely bonkers ride is ready to be unveiled to the world. 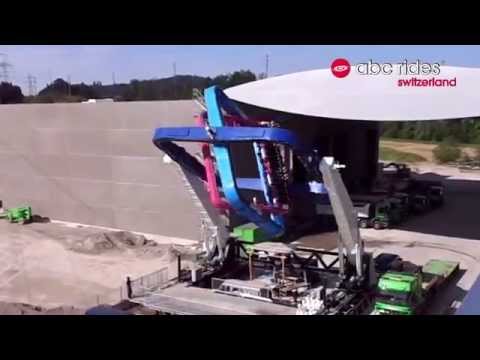 The Tourbillion ride opened to testers this month and it has two rows of seats with one row sitting behind the other inside the primary cage. The maroon colored primary cage starts rotating 360 in the first stage, giving a chance for the people to hold onto the safety bars. After that begins the real madness with the rest of the machine starting to spin at all three axes. Even a morsel of food before the ride will be converted into a projectile. To give you an idea on how crazy the Tourbillion ride is, NASA uses a similar machine, which is much smaller in size, to train its astronauts. Have a look at the terrifying video of the ride in action after the jump.

Tags from the story
Park, Tourbillon