To celebrate the US arrival of the revolutionary BMW i8, the Bavarian automaker unveiled a one-of-a-kind BMW i8 Concours d’Elegance Edition. The exclusive edition of the world’s most futuristic car made a glamorous debut on last Saturday at BMW’s private villa, giving the media its first chance to look at it. Jay Leno along with Ludwig Willisch, President and CEO, BMW of North America, presented the car during its unveiling and it was later auctioned off by Gooding & Company for charity. Ahead of the auction, the special edition BMW i8 was estimated to bring in somewhere near $200,000 but the final hammer price settled at a whopping $825,000, including buyer’s premier, which is approximately six times the MSRP of $135,700. . Proceeds of the sale made by Gooding & Company, the official auction house of the Pebble Beach Concours d’Elegance, will go to the Pebble Beach Company Foundation, which raises funds for Monterey County youth and distributes grants spanning the arts, athletics, environmental sciences, educational organizations and community programs. 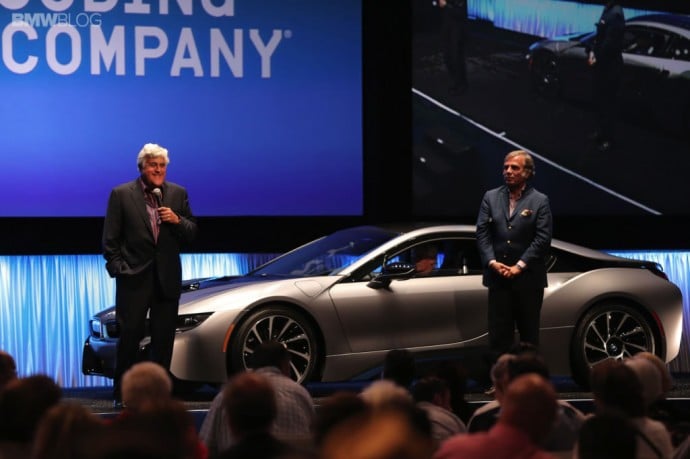 The most eye catching feature of the Concours d’Elegance i8 is its matte grey paint, known as Frozen Grey Metallic. This isn’t the first time we’ve seen this paintjob on an exclusive BMW, as it is the same hue which was used for the Frozen Grey M3 from 2010. The interior is decked out in Dalbergia Brown leather upholstery, which is tanned using dye derived from plant extracts and accented with stitching in BMW i Blue. The words “Concours d’Elegance Edition” i8 are laser etched in the interior and “BMW i8” is embossed into the front headrests making the one-off i8 all the more special. It also comes with complimentary set of exclusive Louis Vuitton baggage and a “professional edition” charging station.