Funny how a watch can make time stand still. Not just any timepiece, the one in question is an incredibly holy Swatch that adorned the praying/blessing hands of Pope Francis. Part of a charity sale Rago/Wright will host in Chicago this week, the timepiece could fetch a whopping $100,000 at auction. This Rago/Wright auction is unique as it brings forth 49 watches like Rolex, Longines, Omega, Bulova, and Swatch, formerly owned and worn by individuals who have made a difference in the world. Proceeds from the “Once Upon a Time Watch Project” sale will benefit the Brian LaViolette Scholarship Foundation. 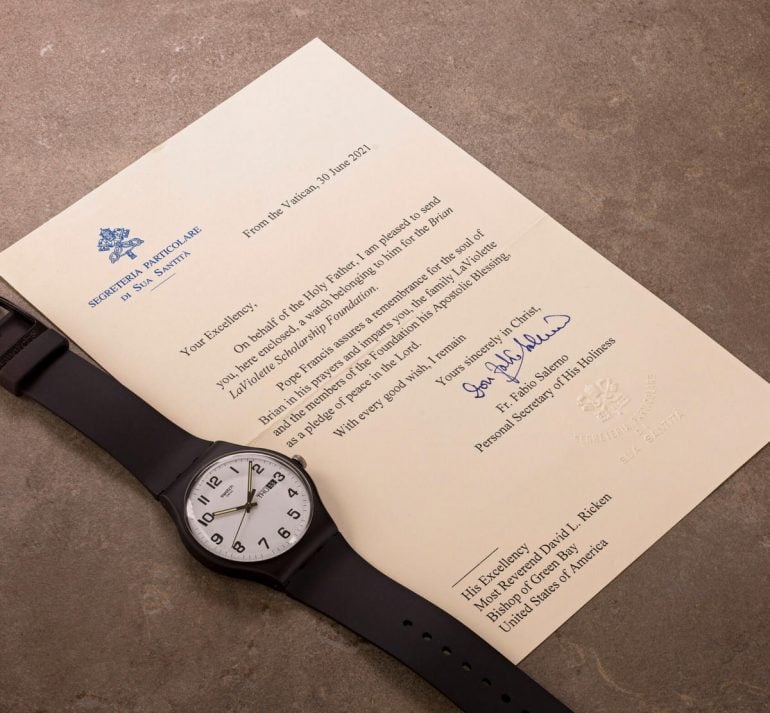 
It is the first time Pope Francis has offered a unique gift to any United States charitable organization. The Swatch timepiece (Swatch ref. SR1130SW-GB743 ) will include a letter of authenticity from the Personal Secretary of His Holiness, Father Fabio Salernon, to the LaViolette Family and members of the Brian LaViolette Foundation – serious papal provenance, per Timeandtidewatches.
Tags from the story
Pope