Pope Francis, known for being frugal in his tastes and leading a very modest lifestyle all his life, now has a Lamborghini Huracán LP580-2 with a fire breathing V10 motor under its hood. With a shiny white paintjob with gold colored stripes running across the body, the Huracán is a bespoke, one-off model specially built for the Pope to match his attire which was handed over to him as a gift by Lamborghini. So, will the Pope ditch his modest black Fiat 500 for this beast of a supercar as his daily mode of transportation? Sadly, no. The Vatican announced that the vehicle will be auctioned at Sotheby’s, with the proceeds to go to three of the pontiff’s favored charities. 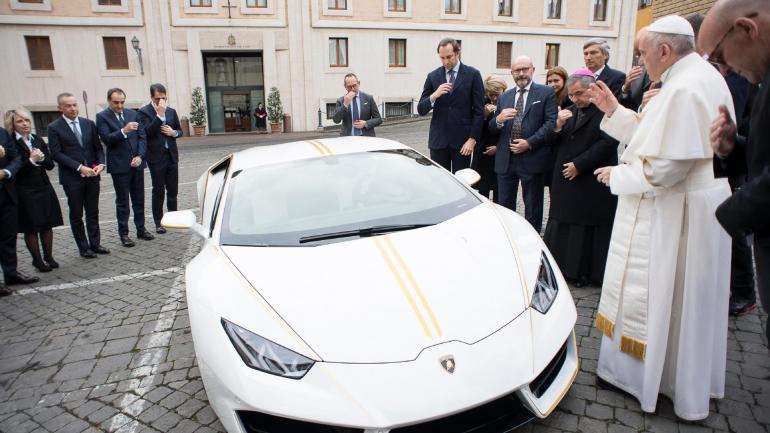 Much like when Ferrari donated the Pope the final Enzo ever made, to be auctioned for funds to help survivors of the 2003 tsunami, this special edition Huracán signed by His Holiness will go under the hammer with the proceeds going to four different charitable projects, including one aimed at rebuilding the homes and churches of persecuted Christians in the Nineveh Plains in Iraq. The Lamborghini will also help fund an Italian association helping victims of human trafficking and prostitution rings, as well as two organizations active in Africa aimed at supporting vulnerable women and children.