Joseph Nicéphore Niépce was the man credited as the inventor of photography and a pioneer in that field. Even in this day and age, there’s someone showing amazing dedication towards the camera, almost equaling the passion of the man who started it all. Though they both have presented their fixation with the device in very different ways, let’s get talking about the man whose fetish with photography and all things that click has attained unprecedented levels. An Indian man Ravi Hongal has taken the term “passionate about photography” to a whole new level altogether by building a 3-story camera-shaped house. A professional photographer, his love affair with the camera began as a child in his hometown Belgaum in Karnataka. Even as a boy he was never seen without his ‘Pentax’ camera to click photos. He soon turned his passion into his livelihood and started a business with his wife Rani. He even declared his love for photography unabashedly by naming his three sons Canon, Nikon, and Epson which are displayed on the exterior of his home. But he truly outdid himself when he celebrated his love for the camera by turning his home into a camera-shaped shrine exhibiting his undying love for the device. Ravi spent around $95,000 to shape his house like a giant vintage camera, complete with a lens-shaped window, flash, and even a giant SD card. 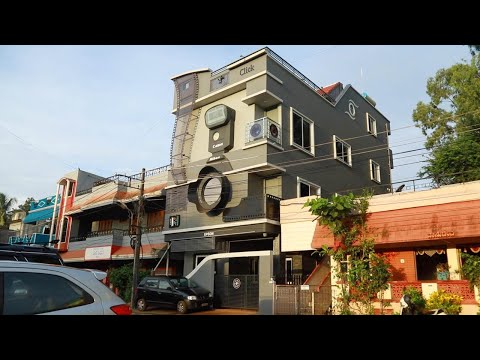 This unique-looking home of the ardent camera-lover was recently showcased in a Cater’s clip and they say even the interior decorations are along the same lines, with ceilings and walls designed as different parts of a camera. The house has developed an identity of its own and has become something of a tourist attraction in Hongal’s town.