T-shirts, more often than not, aren’t considered to be luxury clothing options. While there are a few fashion aficionados who regularly dish out huge parts of their bank accounts to splurge on clothing, not a lot of people would spend a considerable amount on a t-shirt, unless it’s a historic piece of band merchandise, like this Led Zeppelin t-shirt. Recently, we came across this t-shirt that was sold at a jaw-dropping price of $10,000, a price tag you wouldn’t see stuck to a band t-shirt all too often. Termed as the rarest and the most expensive Led Zeppelin t-shirt ever sold, this one was used as a backstage pass for one of two concerts Zeppelin played at Knebworth House. This special edition t-shirt was printed in limited numbers and was handed out as backstage passes only to a lucky few, granting them access to the band. One of these was acquired by Stormcrow-Vintage directly from the family who printed the t-shirts and was put up on sale on eBay. 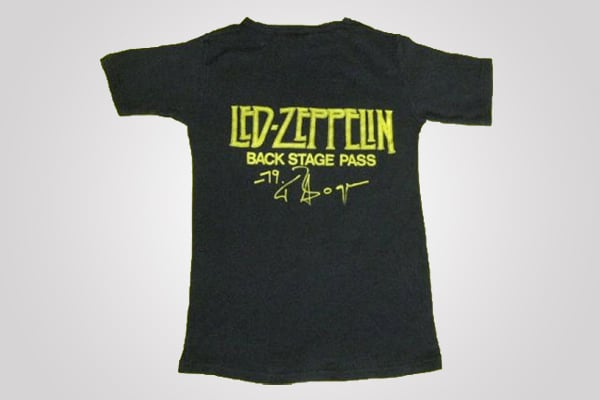 The t-shirt, dating back to the year 1979, is the second most expensive t-shirt that has ever gone up for sale on eBay, and its sale has set a record transaction. However, if you’re a Led Zeppelin fan who doesn’t think twice before throwing those horns up in the air or splashing enough cash on merchandise like this, you’re bound for a little disappointment, as this one-of-a-kind t-shirt has been bought and paid for by an unnamed Australian buyer.